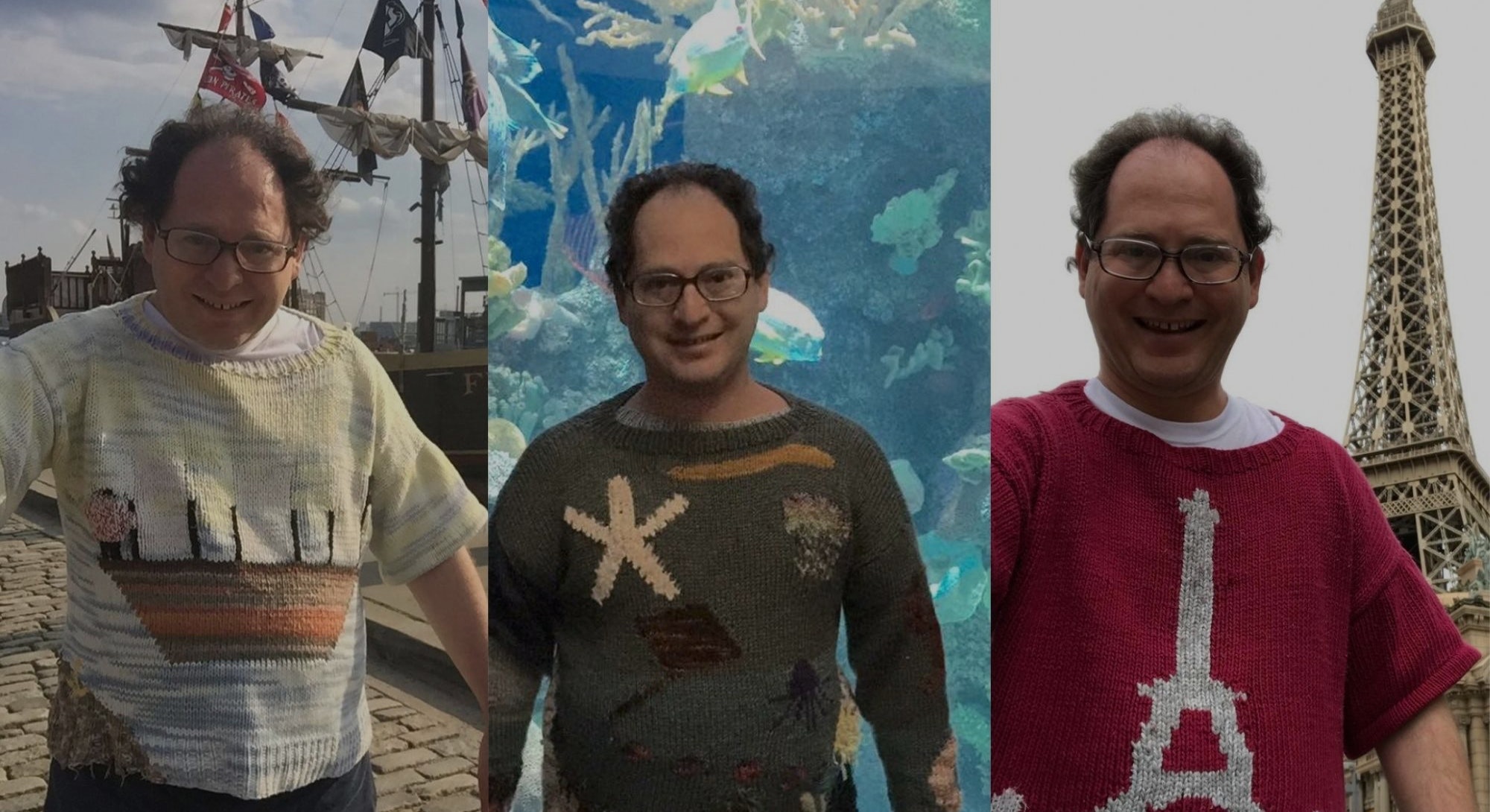 “The saddest thing that happened in my life as a knitter,” Sam Barsky says in a TikTok, “is that I made a Twin Towers sweater before the Twin Towers were destroyed.”

He goes on: “I made it in May of 2001 after I took a bus trip to New York and as [the] bus was leaving the city, I saw the Twin Towers and it inspired a sweater. I never would have imagined what would happen four months later. I barely wear it anymore but I wear it once a year on 9/11,” he explains in front of a green screen projection of the towers. The TikTok video racked up over 4 million likes and 12 million views.

Amid a tornado of TikTok fads and dances, Barsky’s videos are utterly singular and charmingly off-trend. They’re short (about 20 seconds), simple (just him and a green screen), and he’s not putting on an act — he just loves knitting unconventional scenes. His accounts are probably my favorite spot on the internet right now, and this 2017 Imgur album of his creations might be the most life-giving scroll I’ve had in months.

The 47-year-old Baltimore artist has attracted the internet’s attention for years — “I’m on TV all the time,” he tells me over video call — for knitting sweaters of various famous landscapes and landmarks. He’s knitted Jerusalem’s Western Wall, Stonehenge, Niagara Falls, the Eiffel Tower, Times Square, and even a field of electrical pylons. His hundredth sweater, the “sweater of sweaters,” features thirty-four pictures of other sweaters he made. Sweater number 157, depicting Ellicott City, Maryland, is almost finished. He started documenting them on Facebook, then on Instagram in 2017, and then on TikTok in late 2020. “Every place that crosses my eyes is a potential sweater,” he says.

“Every place that crosses my eyes is a potential sweater.”

Knitting is Barsky’s full-time job: he leads workshops at knitting groups, visits craft fairs, and sells T-shirt prints of his sweaters. Over 20 sweaters have T-shirt counterparts for sale. Barsky hasn’t turned the Twin Towers sweater into a T-shirt, but he’s planning on it. “I would never want to capitalize off of a tragedy. I just couldn't do that,” he says. “But if I ever make it into a T-shirt, I'll donate 100 percent of the money I make from it to help people who have been hurt by 9/11 somehow.”

His cult following can get personalized birthday messages where Barsky wears a birthday-themed sweater. He charges with a pay-what-you-can system and usually completes about 20 to 30 each day. He declined to share his estimate of the median payment: “I don't want anyone to feel bad just because someone else pays more.” If people are going through hard times, he’s known to make videos for free.

Barsky doesn’t care to wear shirts other than sweaters — even when he goes to formal events like weddings. Back when he was in high school at a special education campus in Baltimore, he wore a lot of Hawaiian shirts. “I keep a few of them as mementos. They're collecting dust somewhere,” he says. At the time, he had an interest in crafting as well as a penchant for mathematics. “I would always get, like, perfect scores on all my math tests. I got a near-perfect score on my math SAT.” These days, he crunches numbers to ensure his knitted art comes out correctly sized. “Knitting is very mathematical,” he says.

Barsky is also a prolific Wikipedia editor. “I’ve written hundreds of articles.” He doesn’t share his username publicly, but his edit count is well into the 5-digits. “I actually have never written about knitting, though,” he said, adding that he’s less active on Wikipedia now that he’s busy maintaining an active social media presence. He says editing Wikipedia is easy: “You just have to know the rules.”

In the past, he’s held jobs as a jewelry maker and, when he was in nursing school, a nurse assistant. He left the program in 1999 after an injury and burnout, and turned to knitting. Some photos feature his wife, Deborah, whom he married in November of 2003. She works in the food industry and is not a knitter. Instead, she has other hobbies like violin, cooking, and baking. Sometimes, he watches TV while knitting — he’s a fan of Discovery, the History Channel, and shows like Rescue 911 and It’s a Miracle. He likes reading nonfiction, especially online articles. “I only read a paper book if I want to get information out of it,” he says.

He’s online all the time, but not on a computer. “I have two iPhones and I do all my computing now from the iPhone. Well, I have a very old laptop computer that's been collecting dust for many years.”

Sometimes, while he’s taking photos at landmarks, he gets recognized by fans. When he was in Hollywood wearing a Hollywood sign sweater, for example, an entire tour group asked for a photo (he happily obliged.) He’s been recognized all over — from the Portland Lighthouse in Maine to Colonial Williamsburg. He enjoys his level of fame: “I'm still anonymous in a Walmart. But there are certain places where everyone runs up to me, like a knitting fair.”

He can’t always predict what will take hold in the algorithm’s spin cycle. “I think I did a lousy job on this one,” he said about his light rail sweater, but his followers loved it. “I think it’s because there are people who like trains, and it's a train.” According to the data Instagram gives him, @sambarskyknitter’s followers are mostly female and American, but fans come from all over the world. “I can’t count how many friends I’ve made online,” Barsky says with a smile.

He’s a little Bob Ross, a little George Constanza, and entirely wholesome. I can’t think of a follow that makes me happier.