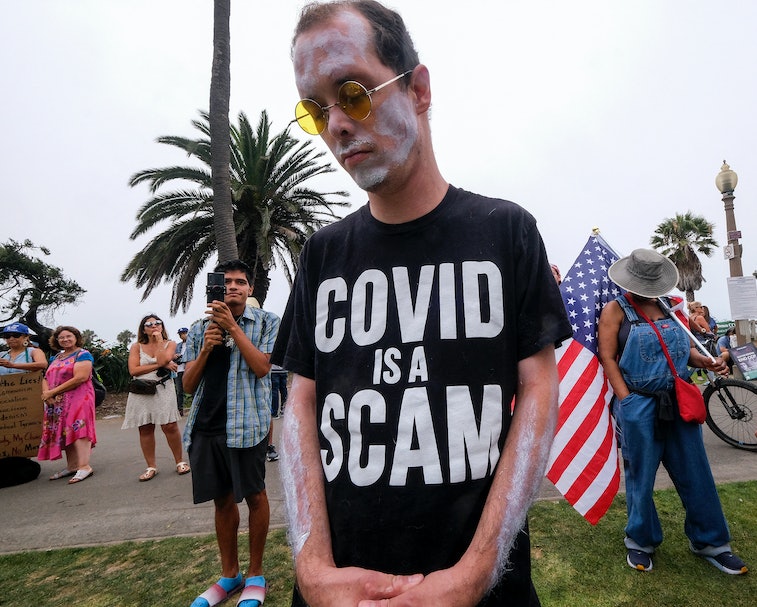 Earlier this afternoon, r/NoNewNormal, an anti-vax subreddit with more than 124,000 users, was banned from Reddit, for “brigading,” the act of one community overwhelming another with a stream of spam and memes, a form of digital invasion designed to drown out the voices of internet foes.

The subreddit had been the subject of a blackout protest by more than 100 subreddits — from huge communities like r/Futurology and r/tifu to smaller, niche groups like r/sourdough and r/SouthAfrica — for spreading Covid-19 misinformation.

On Monday, the moderators of the more than 100 subreddits coordinated, opting to “go private,” and essentially shutting down their sections of Reddit for everyone, even members of their respective communities. The posts and comments became completely inaccessible. Instead, the pages now displayed a simple message: “Our community is closed until the Reddit administration removes /r/NoNewNormal and other vaccine misinformation subreddits from Reddit. We cannot remain open and also keep our consciences clear.”

Reddit not doing enough — The move came after a public letter, posted in several places on Reddit, claimed that the site wasn’t doing enough to combat misinformation on the site. In a post on r/announcements a week ago, Reddit CEO Steve Hoffman responded that “dissent is a part of Reddit and the foundation of democracy,” and that it supports conversations that disagree with popular consensus.

Technically, r/NoNewNormal wasn’t taken down for spreading misinformation. Today, in a post on the official r/redditsecurity subreddit, Reddit user u/worstnerd — an administrator of the website responsible for safety — issued this statement:

We have long interpreted our rule against posting content that “encourages” physical harm, in this help center article, as covering health misinformation, meaning falsifiable health information that encourages or poses a significant risk of physical harm to the reader. For example, a post pushing a verifiably false “cure” for cancer that would actually result in harm to people would violate our policies.

Claims of “brigading” are common and often hard to quantify. However, in this case, we found very clear signals indicating that r/NoNewNormal was the source of around 80 brigades in the last 30 days (largely directed at communities with more mainstream views on COVID or location-based communities that have been discussing COVID restrictions). This behavior continued even after a warning was issued from our team to the Mods. r/NoNewNormal is the only subreddit in our list of high signal subs where we have identified this behavior and it is one of the largest sources of community interference we surfaced as part of this work (we will be investigating a few other unrelated subreddits as well).”

The protesting subreddits lifted their blackout shortly after the news of r/NoNewNormal’s ban was announced. Although approached about the ban, Reddit had no further comments outside of its post on r/redditsecurity.

Taking a stance — In recent weeks, U.S.-based user u/N8TheGr8 -- a moderator of r/tifu, r/aww, and r/MadeMeSmile — had emerged as a spokesperson for getting COVID-19 misinformation off Reddit. Although passionate about the movement that he has helped to popularize, Nate — as he asked to be known — tells Input he has mixed feelings about the r/NoNewNormal ban.

“I'm tentatively optimistic,” Nate said. “I need to still see how the dust is going to settle, and I can't imagine that the admins are terribly pleased with us for getting so much attention on to this issue, but I think they did the right thing in the end. Hopefully they continue to do so.”

Nate’s lack of optimism could be linked to the continued presence of coronavirus-related misinformation across Reddit’s communities. Many of the other subreddits which the blackout sought to vanquish are still available on Reddit, most notably r/ivermectin, one of many internet groups that advocates ingesting horse dewormer in a bid to ward off coronavirus.

Plans to unionize — Still, moderators involved in this shutdown have been so inspired by the fall of r/NoNewNormal — which was achieved through their collective action — that they are considering unionization of sorts, something which u/N8TheGr8 is trying to lead.

“I'm already working on a project to accomplish unionization, and taking a lot of the lessons learned from this event,” Nate explains. He wants to create a system for Reddit’s moderators to easily “unionize” or come together, in case they want to take collective action again.

“We are working on building the software infrastructure to actually accomplish more cohesive moderator-led events,” he continues, referencing the collective action he plans to undertake with his fellow moderators. “We're going to build all that stuff up and we'll create a sort of a moderator union that we can actually utilize in the future, to accomplish meaningful change.”