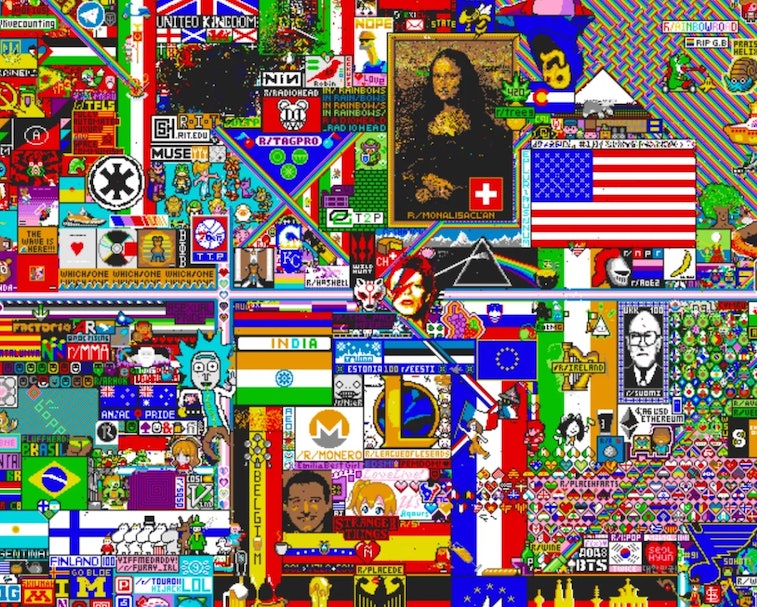 Reddit is bringing back its R/place project this April Fools Day, five years after the original experiment in 2017, in which “more than one million redditors placed approximately 16 million tiles on a blank communal digital canvas.”

In the beginning, all pixels in the project were white. Over the course of 72 hours, however, anyone could change a single pixel to one of sixteen colors. Each redditor could alter just one pixel every five minutes so that no single person could dominate, and groups soon banded together to create coordinated art.

A battle emerged between a blue corner and a red corner, each plotting to dominate the board, and then a group called r/BlackVoid cropped up to blot out any progress. Another squadron put forth a plan to place an American flag in the center, and eventually there was a Mona Lisa, flag of India, and a smorgasbord of meme ephemera. It was the internet in all its glory. It was a chaotic; it was low-brow; it was beautiful.

In 2017, The New Yorker visited Josh Wardle the Reddit product manager (who now enjoys Wordle fame) as the experiment was developing. Fears of swastikas were “what kept Josh up at night,” and even though a few popped up, the final product was refreshingly Nazi-free. The New Yorker reports that one was modified into the Windows logo. one swastika was erased and another was modified to become a Windows 95 logo. And when the American flag caught on fire, redditors stamped out the fire and “the Reddit employees cheered.”

How to participate — The r/Place 2.0 experiment will start on April 1 at 9 a.m. ET and will end 87 hours later at midnight on April 5. To participate, redditors can log in and click on the “P” icon at the top of the home feed. they can place a pixel (one every five minutes) on any of the million spots in the 1000 x 1000 grid.