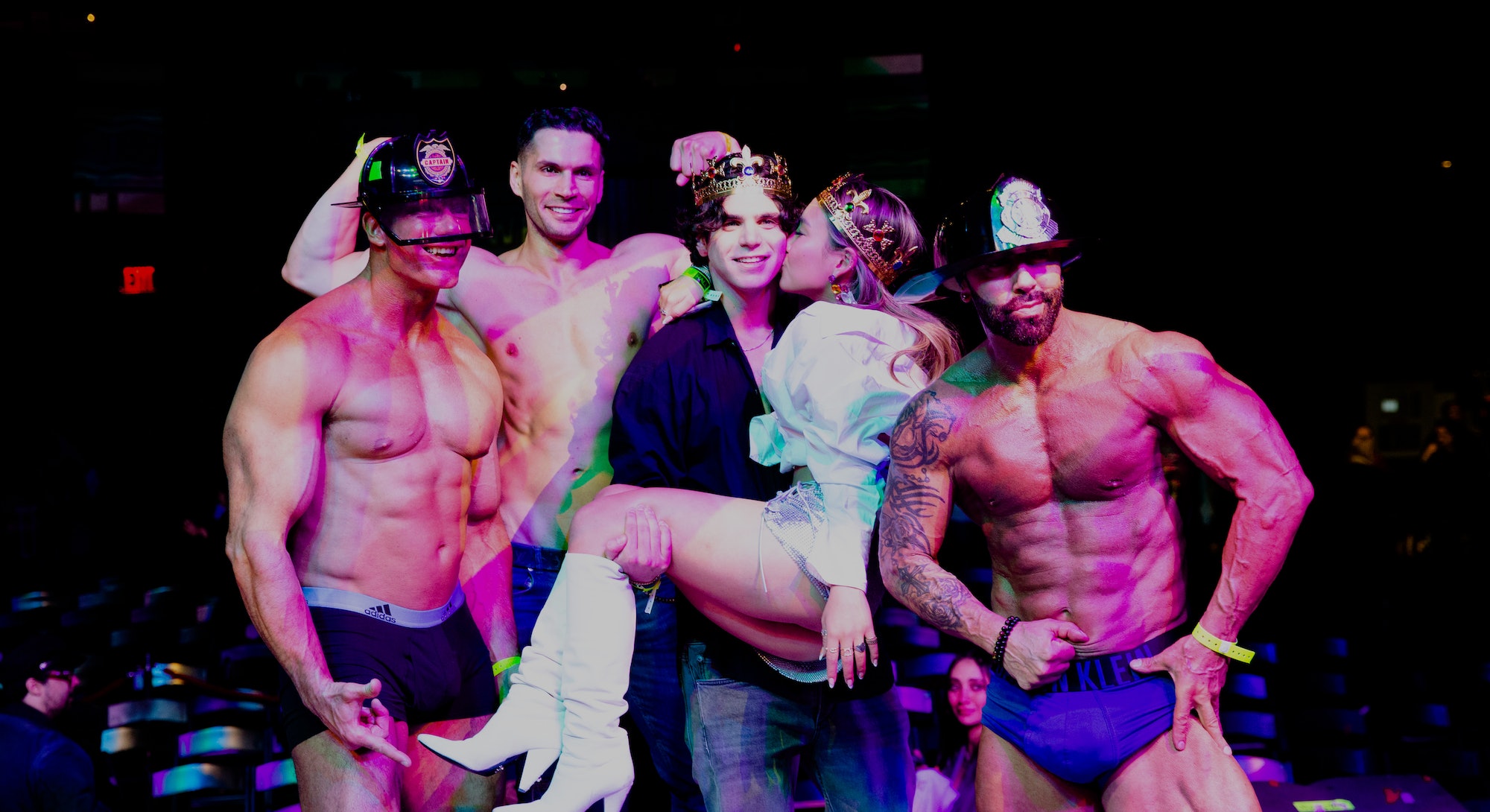 On a warm April night in the Lower East Side of Manhattan, a group of black-clad paparazzi huddle outside an unassuming low-rise tenement on Ludlow Street, waiting for their subjects to make an exit.

Pedestrians slow their pace as they pass by, and bystanders sneak confused glances at each other. Whoever the paps are waiting for, they’re bound to be important.

A few moments later, chaos ensues. A mysterious young couple makes a beeline toward a waiting black SUV as a small throng of fans encircle them like vultures. Cameras flash in rapid succession.

Once the street quiets, curious onlookers ask who they were. “Dylan and Peter from Proof of Love!” the folks wielding the cameras recite back in unison.

The onlookers shrug their shoulders and wander off.

It’s no surprise they don’t recognize the names. Dylan Givens and Peter Stack aren’t famous — the twentysomethings work as a production assistant and bank analyst, respectively — and Proof of Love, the crypto reality dating series that’s been airing every week on YouTube since early March, has pretty meager viewership.

This faux paparazzi scene — which will later be edited to replicate TMZ footage — is one of the many promotional bits curated by the production company Mad Realities, founded by 24-year-old Devin Lewtan, one of the New York University grads behind the viral Clubhouse group NYU Girls Roasting Tech Bros, and 26-year-old Alice Ma, who was a core member of ConstitutionDAO. The crazed fans were friends of Givens’ and members of the Mad Realities team, tasked with creating the illusion that the show is bigger than it is — in a way, willing its success into existence.

So far, it’s worked. “We’re manifesting something big,” Ma tells me only days before Mad Realities closes a $6 million seed round led by venture capital firm Paradigm. High-wattage investors include Paris Hilton’s 11:11 Media, OK Player cofounder Chris Ovitz, and Bumble’s Selby Drummond. They’re all betting on a show that — at least on its face — doesn’t take itself too seriously, but does serve as a “proof of concept” for what entertainment can look like in the Web3 era.

Mad Realities operates as a decentralized autonomous organization, or DAO. Before this seed round, the startup successfully crowdfunded more than 172 ETH (at the time, equivalent to around $500,000) through the sale of Genesis Pass NFTs — animated roses that grant governance powers, such as the ability to vote on cast members. (The community decided to cast the show’s wisecracking 24-year-old host, Tanthai Pongstein, even though he wasn’t the Mad Realities team’s first choice.) Ahead of every new Proof of Love episode, Mad Realities auctions off a unique NFT, called a 1/1, which offers the winning bidder a producer credit, sponsorship rights, and casting control.

The premise of the show doesn’t differ much from what you’d find on network TV. In each episode, contestants compete for the chance to go on a date with that week’s bachelor or bachelorette. The winner can either choose to go on the date or take home a “check” (rendered in Ethereum).

The final cut more closely resembles an SNL skit spoofing a reality dating show than the polished product you’d see on Bravo. An unedited greenscreen remains in the background of many shots; the camera often pans to the crew to gauge their reactions; bad takes are left in for humorous effect. The scripts are hastily written, and the best scenes are improvised.

In one episode, a final contestant’s real girlfriend FaceTimed in as a witness during a staged court hearing; in another improv’d bit, one of the contestants professes their “love” by freestyle rapping atop a Jack Harlow beat. And then there are the increasingly absurd challenges: building a crib in under 15 minutes while holding a baby doll; answering rapid-fire questions while riding a stationary bike; practicing breathing exercises with a professional doula.

It’s satirical and anarchic. Or, as Ma puts it: “It’s a total meme!”

Mad Realities wants you to know that it’s in on the joke. The team doesn’t care if viewers believe that the contestants are actually dating (none of them are, by the way) or if you can tell that the cast is reading off cue cards they’ve never seen before.

The meme of it all gives the show a cinema verité effect. In blurring the lines between what’s genuine and what’s make believe, Mad Realities may have cracked the reality TV code: Nothing is more real than admitting that it’s all fake.

Still, the community Mad Realities has fostered is inarguably authentic — and it’s attracting a new, hipper crowd of crypto adoptees.

When I’m first introduced to the group of NFT holders and their “VIP” plus-ones at one of their weekly episode premieres, held on Sunday nights, I feel like I’ve walked into my Instagram Explore page. The bustling group of twentysomethings swarming inside Bright Moments gallery in Soho are all wearing different variations of the same outfit — oversized blazers and leather jackets, high-top Converse, layered gold accessories, impressively detailed nail art. More than a few opt to keep their sunglasses on inside.

It’s the type of rakish crowd that you’d find huddled on the polyester couches in the basement of Ray’s, the buzzy Lower East Side joint owned by actors Nicholas Braun and Justin Theroux. Except now, after the live screening wraps up at Bright Moments, they head over to the burgundy leather booths at Little Ways, Juuls in hand, enjoying an open bar of Palomas and margaritas.

In other words, this is not the bro-ish Bored Ape Yacht Club scene. As one woman I meet in line outside of Bright Moments tells me, “I didn’t realize you could be into crypto and be hot.”

Though at Mad Realities events, crypto is an afterthought. The people I meet aren’t interested in HODLing (“holding on [to crypto] for dear life”) — they want instant gratification. And if an NFT can tap them into a new social scene or help them get laid, why not?

One woman I meet at Little Ways, a self-described “vulva advocate” on TikTok, tells me that she came to find a crypto bro to fall in love with. “Finances are important in a relationship, and I’m a businesswoman and I’m getting my bag,” she says, despite insisting she’s not a gold digger. “I’m looking for a partner that prioritizes wealth and finances, and I think crypto is the next step in society for that.”

When I ask her if she can define what exactly an NFT is, she responds with a resounding no. I ask her to give it her best shot. “Non-fungible token?” she says with a smile.

Exclusivity has always ruled New York nightlife, so it makes sense that NFTs — whose value is quite literally driven by an imposed digital scarcity — have become a new way to even further silo off young scenesters from their plebeian neighbors.

Still, Ma and Lewtan — in addition to Mad Realities’ head of creative, 24-year-old Adam Faze — are adamant about wanting to make their space more accessible. “I don’t want to create exclusive spaces,” says Lewtan, who also serves as the company’s CEO. “I feel like we're trying to pull out people’s weird, but also bring together young people who care about the creative space, who care about community.” The team hopes to become a “crypto YouTube” or “crypto Netflix” where other creators can produce their own shows centered on niche interests.

Faze says he envisions Mad Realities “looking like Soho House, but less exclusive,” which anyone familiar with the private members-only club will probably have a hard time wrapping their head around. To join Soho House, applicants must send in headshots, nominations from two current members, an application fee, and an accounting of their career. Exclusivity is baked into any social club’s business model; finding a way to make it more accessible sounds ideal, but might prove fruitless.

By the time I show up to the Proof of Love finale in early May, the show had garnered enough attention to sell out Manhattan’s iconic 800-seat Webster Hall.

“We’re here for the vibes,” more than one person tells me. It’s become a catchphrase within the Mad Realities universe. By the end of the night, one of the four couples will be crowned the winner and take home a combined 4.2 ETH. However, given the recent crash of the crypto market, the final jackpot, worth around $13,000 when the show began filming in early March, is now around $8,000.

Luckily, the money doesn’t seem to have been a motivating factor for the people involved with the show. The producers say that what’s surprised them most has been how deeply invested the contestants have been throughout the entire experience. As part of a challenge during the final episode, 21-year-old Chloe Kim, a junior at NYU, agreed to get a tattoo featuring her initials and those of her onscreen partner, 24-year-old strategy consultant Harrison Lane, but they ended up running out of time.

It would have been a grand gesture for a fake relationship. Although Lane and Kim are the ultimate winners, they aren't actually dating. (In fact, Kim pulls me aside on set that same day to tell me she hooked up with one of the cameramen the weekend prior. “So awkward!” she squeals, before downing a shot of tequila.)

The contestants may not be committed to each other, but they are committed to Mad Realities. “I don’t know what I’m going to do now that Proof of Love is over,” Lane tells me in earnest at the finale after-party, where he’s wearing a flimsy gold foil crown to celebrate his win. He wants to do another Mad Realities show when the group resumes programming next year. “If they let me,” he says.

As Lane and I talk in a corner booth at the Jane Hotel, we’re interrupted multiple times by people asking him questions or offering to buy him shots. He waves them off. He’s talking to a reporter. He seems to be adapting to his celebrity quickly.

“I’m doing my best to stay grounded,” he says, stopping himself before he leans too heavily into the bit. “But trust me,” he clarifies, “I know this is all bullshit.”