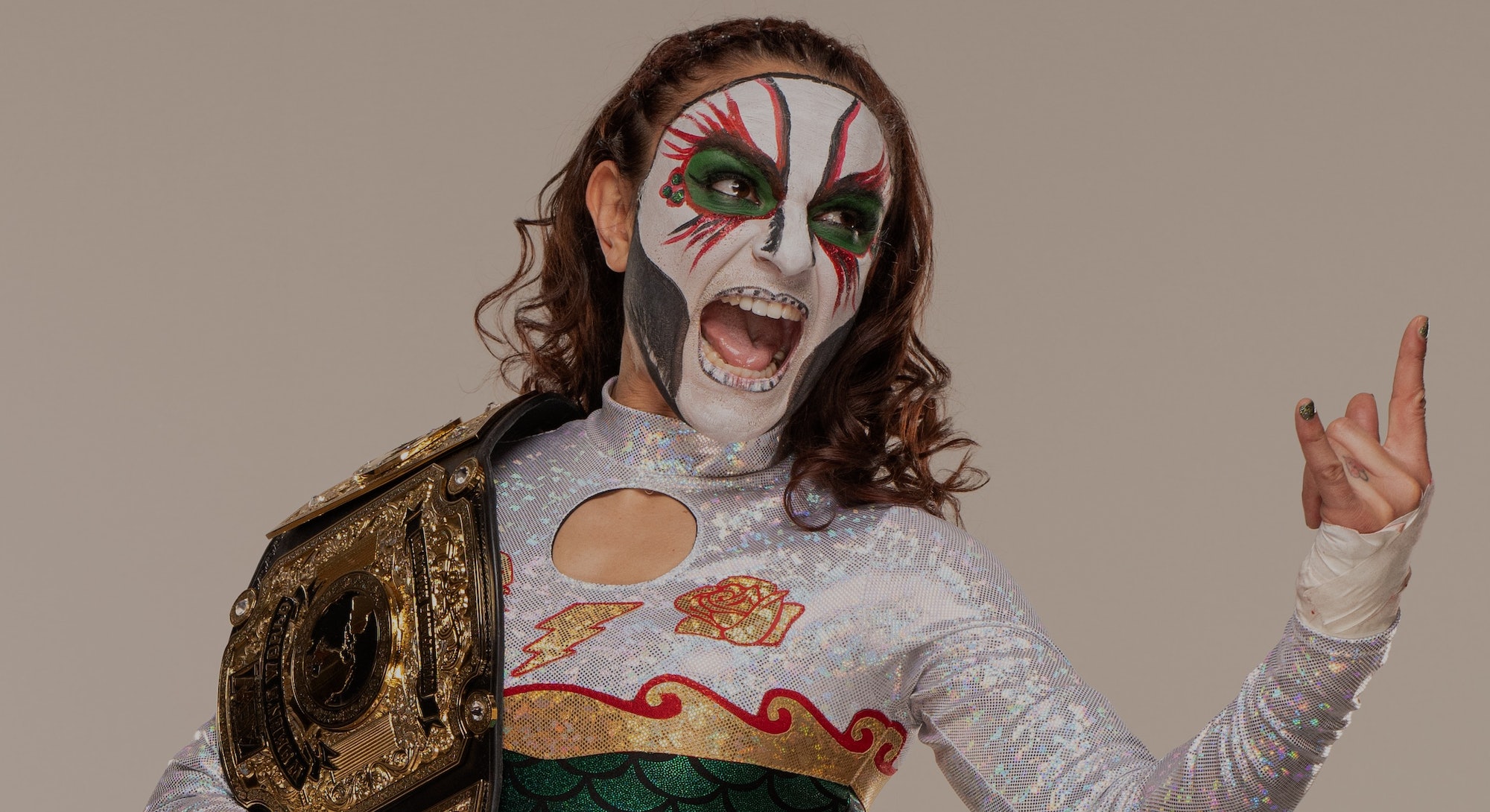 For decades, pro wrestling did everything it could to try and protect the secrets of the artform.

Wrestlers would hide their actual names and their real-world friendships with opponents they professed to hate, instead presenting a glamorous life of sequins and spandex. But that changed as the world did. In the 1990s and 2000s, as reality TV ascended and we all became savvier about “structured reality,” what was previously a whispered claim of fakery became an open conversation.

Fans yearned to know the people behind the characters — and promoters satisfied that desire with revealing documentaries such as Robbie Brookside’s Video Diaries (1993), Beyond the Mat (1999), and The Wrestling Road Diaries (2009).

Today, much of the behind-the-scenes action is on YouTube. At least a dozen high-profile wrestlers outside market leaders WWE — which tightly controls access to its “superstars” and how they are presented to the wider world — regularly post videos of their lives on the platform.

“It shows the fans that you are a regular person with real bills, who gets hurt and can cry.”

The content tends to be less frenetic than it is within the ring — think late-night meals at Waffle Houses and long waits at airport gates — but fans seem to find it no less interesting. The channels’ popularity has increased dramatically recently; wrestling vlogs got 15 million views in the last 12 months, according to YouTube data.

“It shows the fans that you are a regular person with real bills, who gets hurt, can cry, that can fail and succeed and get frustrated,” says wrestling vlogger Melissa “Thunder Rosa” Cervantes, the current AEW women’s world champion, who has built a following of 47,500 YouTube subscribers in the last two years.

Cervantes posts videos about what life is like as a touring wrestler, alongside more lighthearted content, including taco reviews. “I have actually gotten some bookings because of my travel vlogs,” she says. “They want to fly me in so I can eat tacos and stuff.”

Indeed, vlogging is good for wrestler’s personal brands, according to Earnest Pettie, trends insights lead at YouTube and a wrestling fan. “Professional wrestlers are using this opportunity to really take control of their identities,” Pettie says. “This, in a way, facilitates their ability to maintain some kind of consistency for their fans as they move throughout the industry.”

U.K. wrestling historian and fan John Lister echoes that sentiment. “On the indie scene level, a lot of it is about building wrestlers as brands and creating that relationship where people perceive you as a hard worker or a nice guy and want you to succeed,” he says.

Like Cervantes, a number of the wrestling vloggers work for the AEW group. Among them is 32-year-old Ethan Page (75,000 subscribers). Page, who studied television broadcasting at college and worked as a video editor and graphic designer, started posting his own music videos to YouTube nine years ago. He began occasional vlogs about his life as a pro wrestler around five years back and committed to a more regular schedule around three years ago.

“It was my wife’s idea,” Page says. “She’s a really big YouTube consumer and fan, and every time I would tell her about what’s happening while I’m on the road, she’d say, ‘This would be very interesting to your fans, and you could build an audience outside of wrestling.’”

Page was hesitant at first. “I didn’t think my life was interesting at all,” he says. “It’s so normal to me because that’s the people I’m surrounded by, and I grew up around it.” (Page has been wrestling since the age of 16.) “Eventually, I realized we’re all insane and all crazy,” he continues, “and it would be cool for me to document that in a very easily digestible way.”

The videos — which Page edits himself — have been a resounding success. Page says many people in his YouTube audience aren’t even wrestling fans; they’re drawn to videos in which he travels around independent toy stores around the U.S. in search of rare figures. Some of that crowd, he says, end up “turning their TV on to watch AEW.”

He says the vlogs also serve another purpose: “The fact I’m not home as often as I’d like to be means it will be interesting for [my kids] in a couple of years to look back and say: ‘Oh, this is what our dad was doing.’”

Like all digital creators, wrestling YouTubers struggle with the grind of producing content for their audience. “I don’t sleep often,” admits Page, who has committed to posting two vlogs a week. “There are times I dread having to open my laptop and actually start having to do a vlog.”

Still, Page convinced fellow AEW wrestler Evil Uno (real name: Nicolas Dansereau), 34, to pick up a camera. “[Fans] get to see the travails and understand the hardships of going from city to city,” says Uno, who — like Cervantes — hires an editor to cut together his weekly vlogs. “I think it gives a further appreciation for what we do, and also as individual performers.”

It also helps fans buy into the wrestlers themselves. In the same way that YouTube audiences enjoy elevating an ordinary person into a monied creator, so wrestling fans take pride in saying they were a fan of a wrestler when they were performing at National Guard armories and high school gyms. “You go on that journey with them,” says Lister.

Still, there are limits to the sharing: Uno never removes his mask while vlogging. Even his wife, dubbed Mrs. Uno, wears one when she appears on camera. “There is a fine line between showing that stage” — revealing that he is playing a character — “and then going too far” by letting viewers into his real, unmasked life, Uno says.

Uno believes that wrestlers giving fans an insight into their daily lives is a net benefit — and one that could pay dividends for the future of wrestling. “I’m one of the few lucky ones that has gotten to do their dream,” he says. “But there are so many of my friends that didn’t try because they thought it was impossible.”

If wrestler vlogs had been around back in the day, he wonders, would those friends have given up on pursuing a career in the ring? “Maybe we could have taught a lot of people,” Uno says, “that their own dreams are attainable as well.”