President Kanye West: 'They want to put chips inside of us.'

“God appoints the president. If I win in 2020 then it was God’s appointment.”

Kanye West, in an interview with Forbes. 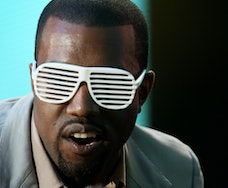 Considering the surprises 2020 has offered up, most people nodded and figured "sure, why not?" when musician, fashion designer, Wyoming emigre, and reality-star-husband Kanye West announced on July 4 that he was running for president. With the election only a few months away, a run for the highest office is insane. But even madder are the responses West offered to questions posed by Forbes. They run the gamut from abortion and the death penalty (West opposes both, citing biblical precedent), to suggesting a coronavirus vaccine would really just be an excuse to implant chips in people.

West's declaration of his intentions reads, "We must now realize the promise of America by trusting God, unifying our vision, and building our future." God features heavily in the Forbes interview, with West claiming the president is "divinely appointed," and that if wins this year, or — in a classic, if pragmatic hedge — only in 2024, either come down to God's will.

Previously, West courted controversy after speaking out in favor of the incumbent, Donald Trump, and even went so far as to don one of Don's iconic "Make America Great Again" caps. Asked how he'll square running against his buddy, West says if Trump runs he'll run as an independent, but that he "would run as a Republican if Trump wasn't there." He also says he's never voted, but registered to do so in March. Oh, and that he likes "Trump hotels and the saxophones in the lobby."

Some of the more skeptical — or optimistic, depending on your position — posit West's announcement is nothing more than a publicity stunt to help promote his forthcoming album. West says that's absurd because he plans to give the album away "for free." For extra lunacy points, West's announcement tweet got the support of tech billionaire Elon Musk, with whom the rapper was recently photographed, and who West says he'd ask to serve as an advisor and head of the U.S. space program. And it only gets weirder from there.

Trump's bunker hunker was the slam dunker — “It looks like one big mess to me,” West says about the state of the union under Trump today. “I don’t like that I caught wind that he hid in the bunker.” He wouldn't be drawn much further on the sitting president, but was happy to claim in the same interview both that he intends to consult Joe Biden about the nitty-gritty of running for president, and that Biden — unlike Trump, Clinton, and Obama — isn't "special."

West also takes exception to Biden's (admittedly ludicrous — and since retracted) comment that a Black person not voting for him would throw their Blackness into question, and argues that the Democratic party strong arms Black voters into thinking they have to support it.

Class of COVID-19 — Even pop stars aren't safe from the current health epidemic. West says he had the coronavirus in February, which resulted in "chills, shaking in bed, taking hot showers," and worrying that Drake, who he'd heard also had the virus, might outperform him in the sickness stakes.

It's a Wakandaful life — A competitive streak and rampant egocentrism are, arguably, excellent qualifiers for a presidential hopeful. Less promising, though, is arguing that a suitable replacement for political "policy" is "design," of the sort West learned in his collaborations with Nike and Louis Vuitton. And that instead of running the White House like an administrative arm of the executive branch of government, it may pay instead to "use the framework of Wakanda." You remember Wakanda, right? The fictional, African-amalgam city somewhere in central Africa from whence the heroes of Marvel's Black Panther come, and where everyone speaks the very Southern African language, isiXhosa?

Make America Fun Again — The conclusion of the Forbes interview is perhaps the most insightful and illustrative part. "When I’m president, let’s also have some fun," West says. "Let’s get past all the racism conversation, let’s empower people with 40 acres and a mule, let’s give some land, that’s the plan.”

Buckle up, folks. Because if you thought 2020 or American politics were even remotely considering settling down a little, Kanye West is here to remind us all that hoping as much is what real craziness looks like.