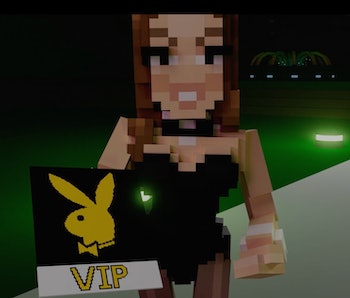 Playboy is partnering with The Sandbox, a metaverse platform that hosts games, NFTs, and other experiences, to introduce its own “MetaMansion.” According to Playboy, the MetaMansion will be a “virtual destination for fans and the Rabbitar community to experience and build the world of Playboy.”

For the uninitiated, Playboy unveiled its official NFT project — a collection of nearly 12,000 rabbit figures known as Rabbitars — back in April and the creation of a metaverse-based hub functions as a continuation of that project.

Both Playboy and The Sandbox teased the project on Twitter, with the inclusion of a short video that has a pretty surreal vibe. Shot in a first-person perspective, the viewer is ushered into a gated property by a woman dressed in the recognizable Playboy bunny outfit, and designed with what looks like Minecraft graphics.

Stepping further onto the property reveals a number of other blocky Playboy bunnies, beckoning the user towards a massive red carpet while an instrumental ripped straight from a top-shelf rum commercial plays in the background.

Sharp re-brand — It comes as no surprise that Playboy has re-invented itself since its heyday. What started out as a magazine designed to cater to male interests, eventually evolved into a global, lifestyle brand, that found itself needing to adapt as time and cultural attitudes shifted throughout the 2000s and into the 2010s.

In 2014, the magazine stopped including nudity on its website, which now operates more or less like a standard e-commerce site. Now, Playboy, like a lot of other brands, is betting on NFTs and the general web3-ification of both our digital and physical experiences.

Still, there is something left to be desired with the early look at the virtual Playboy mansion, which promises its users will be able to engage in “interactive gameplay, original programming, NFT collectibles.” Those that have already purchased a Rabbitar NFT, will gain “special access to experiences, quests, giveaways and more.”

As we mentioned earlier, The Sandbox makes use of Etherum-based, blockchain technology and a number of other brands, like Warner Music Group and Ubisoft, have already tapped the company to assist in the creation of their own metaverse on the platform.