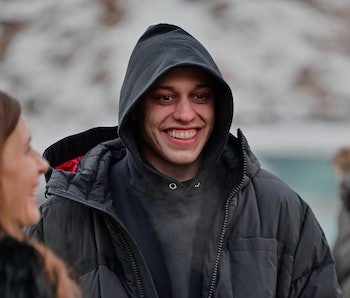 The Page Six source reported that the flight is intended to happen sometime this year.

Davidson, the 28-year-old comedian known for his prolific love life and palpable BDE, made headlines this week after Kanye West released a music video in which a cartoon Pete Davidson is kidnapped and beheaded — a disturbing development in Ye’s one-sided feud with Kim Kardashian’s new beau. Perhaps I’d want to leave the planet, too.

The celebrity space race — Blue Origin has become a fixture of the nascent private space race industry along with Elon Musk’s SpaceX and Richard Branson's Virgin Galactic, and obscenely wealthy Hollywood stars are jumping at the opportunity to leave Earth. Actor Ashton Kutcher revealed he had a Virgin Galactic ticket that his wife Mila Kunis ultimately convinced him to sell.

Tom Hanks, ever endearing, revealed that he passed on the opportunity for a trip to space — saying the $28 million price tag was the deterrent (his intimate familiarity with Apollo 13 probably helped him make the decision, too).

Back on lowly Earth, we’re experiencing war, disease, and an unequivocally terrifying progression of climate change. But if you’re uber-rich, you can keep your head in the clouds and your body in the cosmos.