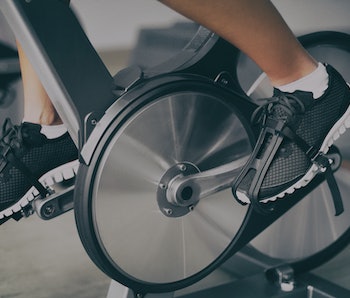 According to internal documents obtained by CNBC, Peloton is temporarily halting production of its connected fitness products in response to low demand. The $PTON stock, which was worth over $150 a year ago, took a nosedive to just $24. Overall, the market value dropped by 2.5 billion on Thursday — a fall of emoji-like proportions 📉.

The news comes just two days after Insider reported that the company planned to lay off 41 percent of the sales and marketing staff in response to waning consumer demand that resulted in measly profits and a glut of products sitting in warehouses or cargo ships.

To make matters even more complicated, CEO John Foley sent a letter to all Peloton staff last night claiming the rumors of a production halt were entirely false. So now we don’t really know what to believe.

Things were looking good a year ago. Pelton bought Preor Inc., a fitness equipment manufacturing company, for $420 million. In early 2021, it announced plans to spend $400 million building a factory in Ohio.

But the heyday is over — According to the documents obtained by CNBC, Peloton will not produce bikes during the months of February and March. The Tread treadmill’s production break will last six weeks, and the pricier Bike+ and Tread+ products will be paused for even longer.

Smells fishy — According to SEC filings reported by CNBC, Peloton executives and insiders sold nearly $500 million worth of their stock in 2021 before the huge declines we’re seeing now. To be fair, there were all sorts of other people selling their Peloton stock, but it really makes you think, huh!

But Foley denies it — Just hours after news of the production standstill broke, CEO John Foley sent an email to all Peloton employees denying a complete pause in production. The letter, which can be read in full on Peloton’s corporate website, says instead that the company is “right-sizing” its production. Whatever that means.

Foley also addresses the idea of layoffs in his letter, though he does this, too, in a roundabout fashion. “We now need to evaluate our organization structure and size of our team, with the utmost care and compassion,” he writes. “And we are still in the process of considering all options as part of our efforts to make our business more flexible.”

It’s not all sunshine and rainbows, even for a unicorn — Are users are ditching their machines for in-person workouts, relegating their bikes to the corner of the room to function as a clunky clothing rack? Not necessarily. But new Peloton converts just aren’t accumulating at the same rate as before.