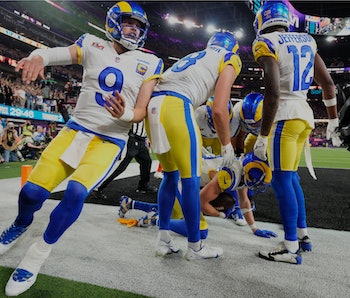 The NFL’s relationship to the blockchain — and everything else that falls under that umbrella, like cryptocurrency and NFTs — has been a laughable game of tug-and-pull, only if said game was being played by a single person, with no one on the other end to offer resistance.

Last September, the league cautioned its 32 teams against partnering with crypto firms for sponsorships and barred them from selling NFTs. Not even three months later, the league would reverse course on its NFT stance, and by the time the Super Bowl rolled around in February, crypto would be the biggest theme among the event’s notorious ad spots. Now, a CNBC report describes a memo sent out by the NFL yesterday that has granted even more liberties to its collection of franchises when it comes to crypto-related sponsorships.

Teams can now enter “promotional relationships” with blockchain companies. So basically, you might start seeing an influx of NFL players and team imagery within ad material from places like Coinbase and Crypto.com.

Just do it already — This updated NFL policy is just the tip of an iceberg waiting to reveals itself in full, because of all the caveats in place. You’d imagine this rule would mean a number of stadiums becoming renamed to things that roll off the tongue with the same dissonance of an out-of-tune youth orchestra.

However, the NFL is preventing any blockchain interference when it comes to stadium signage. There are also restrictions for the promotion of specific cryptocurrencies, and fan-made tokens. For now sponsorships will be limited to the platforms facilitating crypto and NFT deals instead. The memo reads:

Clubs will continue to be prohibited from directly promoting cryptocurrency.

Still, it’s only a matter of time before crypto companies are firmly integrated into the brand and imagery of the NFL, like they are in other sporting leagues such as the NBA and UFC. This most recent decision arrives on the heels of an NFL lobbying push, where the league tried to influence the Securities and Exchange Commission on “issues related to blockchain technology.”

All of the NFL’s actions are representative of the kind of league it is — traditional, with a reticence towards any drastic change. But opening itself up to crypto-related sponsorships isn’t as difficult a step to take as, say, making meaningful efforts to address player visibility and the racist dynamics between an all-white, billionaire contingent of owners and a heavily Black league.

Partnering with new-age companies, like any of the blockchain-powered platforms that have emerged in the last handful of years, will inevitably secure the NFL a lot of money, after all. There’s no sense in it trying to play coy.