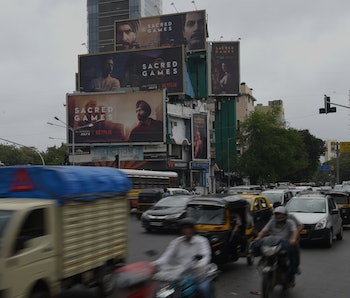 Streaming services like Amazon Prime Video, Netflix, and Disney+ are going to bend over backward to protect their freedom of expression in India. According to Variety, the three services, as well as 13 competitors, have agreed to self-regulate in order to prevent the Indian government from stepping in.

The code of conduct was created by the Internet and Mobile Association of India. The system will encompass age labels on content, descriptions of objectionable material, and reporting interfaces for bringing the companies' attention to media that has not been properly labeled. This will, naturally, necessitates the formation of review departments and committees to handle the day-to-day judgment calls.

Episodes — This compromise is a way to reassure parents and other concerned groups that online content is subject to some form of oversight without forcing the hesitant Indian regulators to have to step in and sort things out.

Obviously, if the system is a success, this could work out in all parties’ favor — though it should be noted that similar industry-created systems of media rating boards in the US have been no stranger to controversy. It's also a little depressing that streaming services can see fit to self-regulate while social networks like Facebook — where doing so is arguably far more necessary — refuse to.

Metrics — Companies are willing to do whatever it takes to gain a foothold in the lucrative and powerful Indian streaming market, which is expected to be worth $5 billion by 2023. Netflix alone has committed to spending over $400 million on content to cater to India's population of over 1.3 billion people. Nobody involved wants to see an investment like that fail over something like an age label.