A brief history of the 'my brother in Christ' meme

“It’s good fun, mostly. I think we’ve all had those moments where someone is there to acknowledge your moment of stupidity, and thus we can all relate to these memes.” 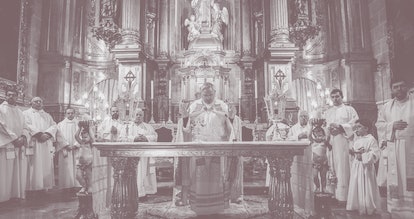 A Christian revival is hitting social media — but it’s drenched in ambiguous layers of irony, and it’s happening in the messy confines of memes. People are using the phrase “my brother in Christ” to connote friendly condescension with a polite and pious flair, pointing out their peers’ problems with Christ-like respect.

“My brother in Christ” has a faux earnestness that’s disarmingly affectionate, and Know Your Meme says that the first recorded instance was this Subway meme, where the phrase was placed over the n-word. In the past two months or so, “my brother in Christ” memes have poked fun at car infrastructure, Chipotle haters, self-professed manic pixie dream girls, and parents who are out of touch with mental illness. It’s been paired with sad images of Elmo impersonators and has even been used to dunk on the president.

Memes use formal language (Sir, this is an Arby’s!) and artificial endearment (“bestie”) all the time for humorous effect, and “my brother in Christ” does both at once. The whole point of memes, really, is to package new ideas in a familiar format, using nostalgia or the thrill of recognition to make some new idea appetizing. And “my brother (or sister, or sibling) in Christ” stirs up religious memories of benedictions or scripture readings — Christian rituals that may seem nostalgic to young adults who, as a whole, are waning in religiosity.

Bible study time — The phrase “brothers and sisters in Christ” is sprinkled throughout the Bible’s New Testament, usually translated from the Greek word adelphoi, which was used hundreds of times in the holy book. The King James Version interprets the word as “brethren” and is well-understood to refer to siblings. Paul starts his letter to the Colossians, for example, by calling them “faithful brothers and sisters in Christ” and wishing “grace and peace to you from God our Father.”

So, would a devout Christian consider the meme-ified use to be blasphemous? We asked Pastor John Withum of First Baptist Church of Oregon City, and he told us that “part of the responsibility of God’s family is to gently help each other follow the ways of Jesus when we stray.”

He continued: “When the Apostle Paul was writing about it, I’m not sure he was referring to overfilled Chipotle bowls or not leaving enough room for cream in your coffee, but I don’t think it’s ‘blasphemous’. It’s good fun, mostly. I think we’ve all had those moments where someone is there to acknowledge your moment of stupidity, and thus we can all relate to these memes.”

A fashion religious revival — In August, GQ proclaimed that from “Sunday Service to Holy Trinity bikinis, religion is trending.” In that article, the magazine described a vaguely ironic embrace of Christian principles by fashion brands like Praying (the makers of the ‘God’s Favorite’ trucker hat and the Holy Trinity bikini) and I NEED GOD (which sells shirts emblazoned with a “prayboy” bunny and booty shorts that say “GOD WON’T LET ME DIE”).

It’s hard to pinpoint where we are in the life cycle of this particular meme, but online creator Ena Da tells Input she thinks it’s on the way out. So send your slightly patronizing remarks while you can. And remember, my brothers and sisters in Christ, to always keep the faith.