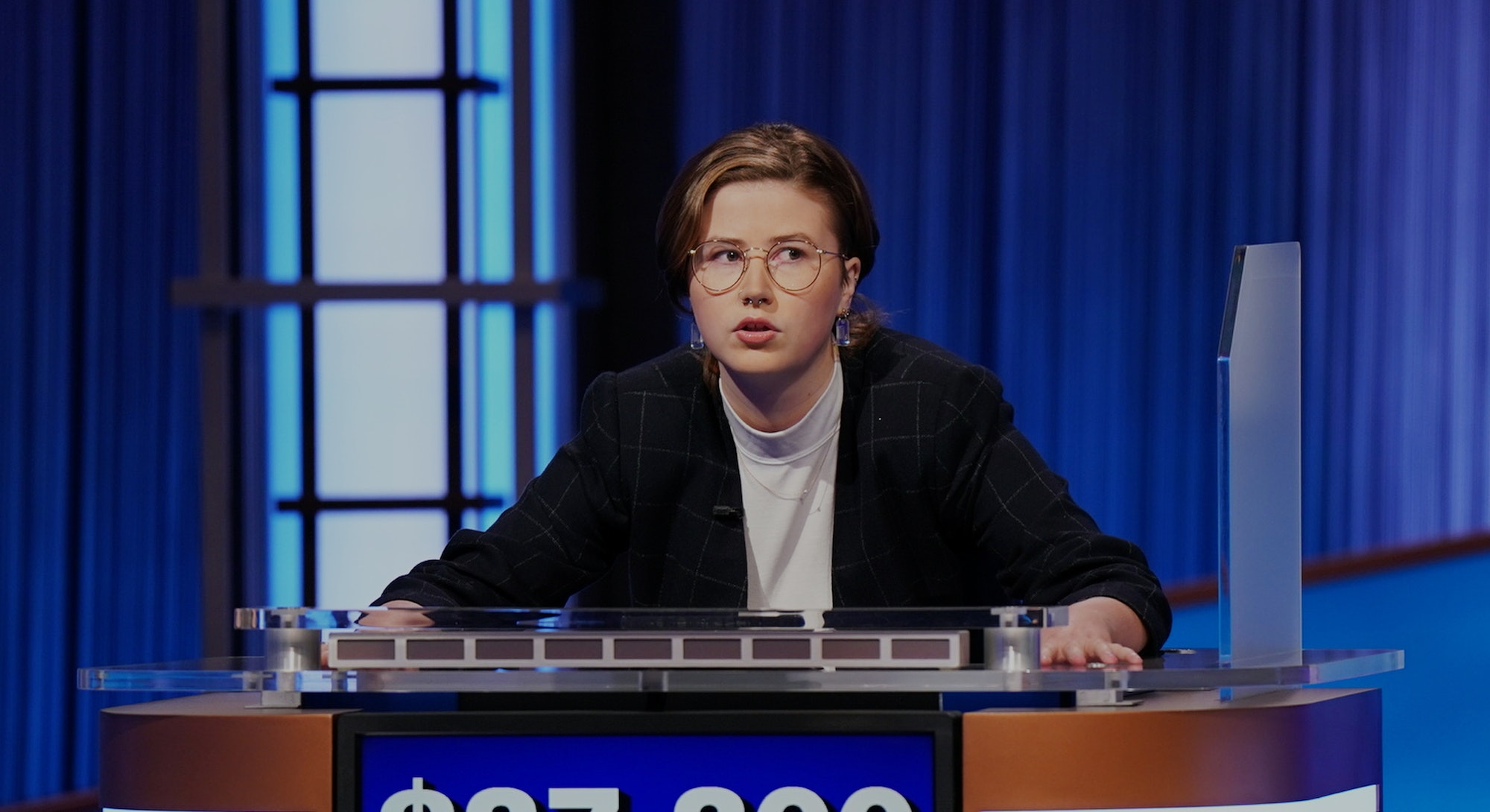 Mattea Roach took the Jeopardy! test on a whim in November 2020. At the time she was living at home with her parents in Halifax, Nova Scotia and working her way through online classes.

A year and a half later, the 23-year-old LSAT tutor has racked up $460,184 in her 19-day winning streak on the game show and has earned at least three impressive titles along the way: longest-running Canadian contestant, eighth-longest-running contestant of all time, and third longest-running woman.

She’s also garnered praise for her chatty demeanor and flappy gestures. “Best performance by a wrist on television this year so far,” joked former Jeopardy! contestant Rhone Talsma on Twitter.

Now, she’s heading to the Tournament of Champions in the fall with fellow trivia phenoms Amy Schneider, Matt Amodio, and others.

The day before Roach filmed her first game was the same day Amy Schneider’s losing episode aired, ending her 40-day win streak. In an essay, Schneider wrote that when people ask how she got so smart, she’s tempted to reply with “How does anyone know anything?” Roach, too, struggles to articulate exactly why she knows that Papeete is the chief port of Tahiti, but like usual, she has a pretty good guess.

She reads widely, but only about topics she cares about. “I’ve never been a person to read something out of obligation, which is probably why my science knowledge is more shallow,” she says. When she was younger she was “obsessed with atlases,” and in her teenage years, she spent many late nights watching Turner Classic Movies.

Her knowledge — about everything from the Hanseatic League to the birthplace of Wyclef Jean — comes from all sorts of places, many of which are online. Input caught up with Roach to see how the Jeopardy! champ’s online habits stack up to ours.

Puzzles: Roach starts her day with internet puzzles: the New York Times sudoku, the New Yorker crossword, Wordle, Quordle, Octordle, and even Sedordle, which is sixteen Wordle puzzles at once. “I refuse to get a New York Times games subscription because I would waste too much time doing the crossword archive,” she says.

Wikipedia: “I’m definitely somebody who goes down Wikipedia rabbit holes pretty easily,” Roach says. “Two interesting Wikipedia-related developments in my life have been the creation of a Wikipedia article about me (which still feels crazy to say) and the launch of Redactle which I’ve been really enjoying.”

News: Mattea spends about an hour per day clicking links to news articles on Twitter. “My love language is sending articles,” she says. She and a friend both have trouble sleeping and send each other late-night links. She also says she subscribes to a couple of newsletters, specifically mentioning Mental Hellth and Xtra’s newsletter.

Podcasts: Two of her favorites are You Must Remember This for Old Hollywood history and Eating for Free for contemporary pop culture criticism.

Chrome Extensions: Her favorites are ad block and Forest, a productivity tool that blacklists her most distracting websites (social media, puzzle sites, online bridge) when she wants to get work done.

Social media: She was very into Tumblr back in high school but has migrated to Twitter, which she now uses “way too much at the expense of anything else.” She recently made a separate, professional Twitter, which has climbed to nearly 30,000 followers over the course of her run. She’s not into Snapchat and only uses Facebook for event invites and messaging.

Memes: “I love that memes have developed from top-text, bottom-text impact font to be so layered. They express ideas that you can’t quite get out with words,” she says. “I’ve literally been at therapy and talking to my therapist and been like, ‘You know that clip of the woman doing the math and she’s in prison?’”

Online dating: “I hate it. I don’t like doing it,” she says. Instead, she prefers meeting people in real life. She also says that she still talks to everyone she’s gone on more than two dates with and admits this is “extremely lesbian behavior.”

Crypto: A few people have joked that Roach should invest her winnings into bitcoin, to which she says “absolutely not.” Because of their volatility and environmental impact, she considers many cryptocurrencies to be “bad, bad, bad, bad” and plans to make stable investments with her winnings so she can buy a home in a few years.

Screen time: She uses a 2017 MacBook Air and an iPhone 8. “The battery on my phone has gotten super busted,” she says, “so when my Jeopardy check comes through I will probably be upgrading to a newer model of iPhone. My biggest complaint about phones these days is that a lot of them are too big and as many people on the internet have noted, I have really small hands!” According to Roach’s iPhone data, her screen time comes to about five hours a day.