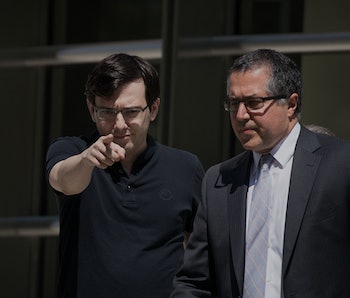 In 2015 Martin Shkreli became the most hated man on the planet after hiking up the price of Darapin, a drug used by HIV patients, from $13.50 to $750 per dose.

His meteoric rise to cultural infamy culminated with a 2017 conviction for securities fraud, and now close to five years later, Shkreli is out of prison and ready to serve up something new: a web3 drug discovery platform.

The name of the service is Druglike, and Shkreli is claiming the company will democratize the drug discovery and its subsequent creation process by providing software to model chemical compounds for free.

How does it work? — Since the platform will be web-based, anyone would theoretically have access to it, something Shkreli emphasized in the product’s press release, noting: “Any computer or phone with access to the web might be responsible and rewarded for discovering the next breakthrough medicine."

In an interview with Milk Road, a crypto newsletter, Shkreli describes his new venture in more detail, noting that “forgiveness is important,” and stating: “I’m smart. I have connections. I have good ideas.”

Running the software needed in computational chemistry is expensive, and as Shkreli points out, companies in the space will pay upwards of $50,000 just to rent hardware capable of crunching those numbers. Shkreli says users will be incentivized to share their findings through “tokenomics,” or in other words: selling their work for a crypto token dubbed Martin Shkreli Inu. Yep, you read that right.

This token is where Shkreli would be making money; by allowing people to invest in the technology, thereby betting on its future ability to impact drug pricing.

Making pharmaceutical drugs cheaper is probably a venture most Americans can get behind, but Shkreli, of all people, has skin in the game beyond just disrupting healthcare. When it comes to Druglike, the benefits for Shkreli could be twofold: make some money and do a little image rehab along the way. Whether people are ready to see the former hedge fund manager — who was just released from prison this May — as anything but the world’s most hated pharma bro is a matter for the public court of opinion. One thing is for sure: the memes certainly won’t be helping him make the case.