“The worst part is that people are buying real estate in these places. Thats just the dumbest shit ever.” 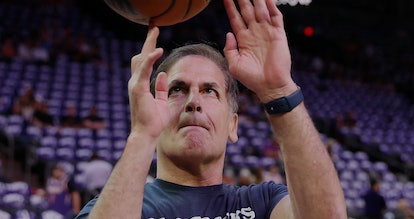 Mark Cuban, owner of the Dallas Mavericks and pot-stirrer on Shark Tank, recently made an appearance on Altcoin Daily, a popular cryptocurrency YouTube channel, where he lambasted the concept of metaverse real estate.

At the beginning of the clip, Cuban is asked point blank about his definition of the metaverse. His initial response is fairly democratic, straddling the line without taking a firm stance on the subject, noting that “there’s no rhyme or reason to [the metaverse] yet,” before circling back to the power of community and its importance in any future crypto or web3-related venture.

Around the halfway mark of the conversation though, the billionaire takes a harder stance, describing virtual real estate as “more talk than anything,” before going on an extended rant that lasts for about a minute in which he becomes increasingly incredulous:

“The worst part is that people are buying real estate in these places [metaverse]. That’s just the dumbest shit ever. The dumbest, dumbest — did I say it was dumb? No that’s not strong enough, super, meta, immaculately dumb.”

Not even a crypto skeptic — The concept of metaverse real estate is shaky, as prospective buyers purchase a plot of digital land (as an NFT), and then develop this land with the inclusion of homes, buildings, and experiential activities. Theoretically, the virtual homeowner can then chill in this space with friends (or alone) or sell their plot for a profit.

Some of the biggest brands have gotten in on the trend, as popularity and sales for virtual real estate peaked at the end of 2021, according to a report from Rubyhome. Trading volume last November was at $229 million, and has since fell to $8 million this past June.

Cuban, who is no stranger to the broader world of crypto — and has in fact been minting NFTs for every Mavericks’ home game this past season — speaks from a position of authority. He even has a financial stake in the matter, as an investor in Yuga Labs, the company behind Bored Ape Yacht Club (BAYC), and Otherside, a metaverse where users can build and monetize experiences on virtual land.

“Look I’m an investor in Yuga, and I still thought it was dumb to do the real estate. That was great money for them, but that wasn’t based off utility... They’re calling it real estate but that’s just a token for access... You gotta have a community first, and then, again, it’s just gated access as opposed to an address.”

There are lots of skeptics when it comes to the metaverse, but what gives Cuban’s comments weight is his proximity to the topic. At the beginning of this year he extolled the value of NFTs, and more recently has invested in an NFT-animation project, but it turns out even an acolyte of web3 can’t wrap his mind around metaverse real estate, apparently.