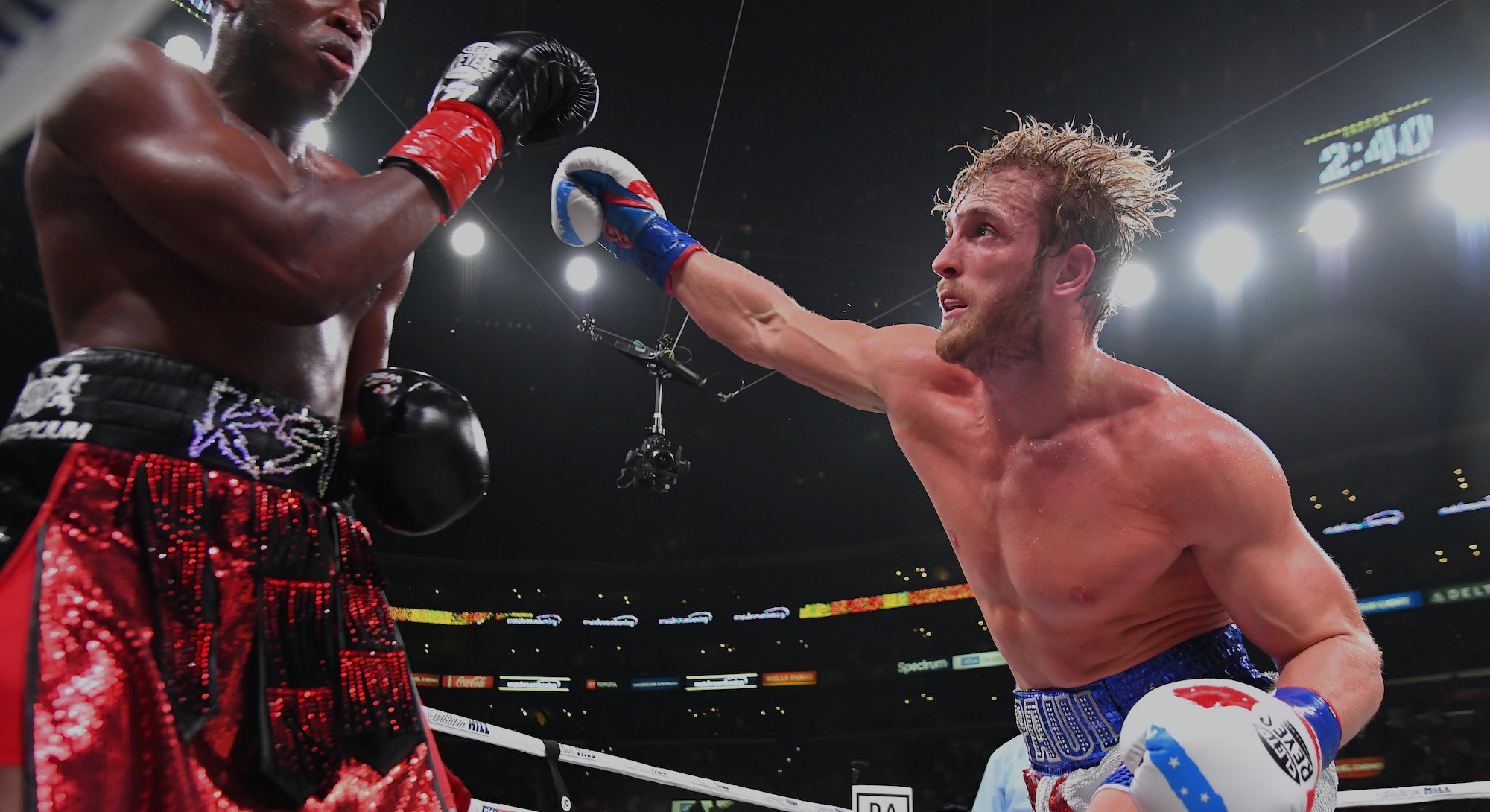 June is a big month for social media and the sweet science.

Logan Paul, the controversial YouTuber whose professional boxing record is a less-than-impressive 0-1, will take on undefeated 50-0 former world champion Floyd Mayweather at Hard Rock Stadium on Sunday, June 6, in Miami Gardens, Florida. Six days later, a dozen YouTubers and TikTokers, including Bryce Hall (nearly 20 million followers on TikTok) and Austin McBroom (19 million followers for his ACE Family YouTube channel), will clash in a separate event in the same arena.

The Paul–Mayweather fight, which will be offered for $49.99 on Showtime pay-per-view and the Fanmio platform, may well be a significant moment in entertainment, if recent history is any guide. Paul’s younger brother, Jake, claims to have convinced 1.5 million people to part with their cash to watch a pay-per-view stream of his own fight against retired MMA fighter Ben Askren on April 17. (Jake knocked out Askren in the first round.) If Jake is to be believed, the event generated $75 million.

Controversy equals cash, as the Paul brothers know well. Jake’s YouTube persona has been built on being as obnoxious as possible to people on camera, and supposedly that behavior continues offline: He’s been accused, by other influencers, of sexual misconduct. Logan, 26, remains best known for a crass video documenting a hanging suicide victim in a Japanese forest, which he followed up by tasering dead rats. Lately, Logan has seemingly matured while Jake, 24, remains a wild child; in 2020, he was charged with criminal trespass and unlawful assembly for being present while an Arizona mall was looted, and his Calabasas mansion subsequently was raided by the FBI.

Yet none of these controversies has dented the Pauls’ brand. Given the brothers’ popularity — Jake will be in attendance at his sibling’s fight now that he’s no longer banned for stealing Mayweather’s hat at a recent promotional event — and the extra star power provided by a former world champ, the June 6 event could well outstrip the April fight. But despite the fact that this match will make money hand over fisticuffs, this can’t last forever — as well it should not. YouTube boxing just isn’t particularly good boxing; nor is it particularly good entertainment.

As for the YouTubers versus TikTokers, don’t expect much. “I don’t think pay-per-view numbers for YouTube versus TikTokers will be will be more than a handful of people,” predicts Stuart Jones, who runs Upload Agency, a digital talent management agency involved in the promotion and running of the original YouTube boxing match, between KSI and fellow Brit Joe Weller in February 2018. “I hate to think of the fees they’ve had to pay those boxers,” Jones adds, estimating the organizers will need a million or more pay-per-view buys to balance the books. “I wouldn’t like that to be my money to pay the fighters — let’s put it that way.”

The YouTube–TikTok event will feature musical performances by Lil Baby, DJ Khaled, and Migos, but Jones doesn’t see those acts as much of a draw. “When people go to boxing, they want to see boxing,” he says. “If they want to see Justin Bieber, they’d go to a Justin Bieber concert, not buy a ticket to a boxing match in the hope that he’s going to spit out a couple of tunes in the ring at some point.” (The undercard for the Paul–Mayweather fight includes actual boxers — likely to the disappointment of Paul’s fans — save for Chad “Ochocinco” Johnson, a 43-year-old former NFL wide receiver trying to switch sports.)

I’ve been to many of the major events that have punctuated social media’s dalliance with boxing — including flying 5,200 miles to Los Angeles in November 2019 to see Logan Paul lose to KSI in the Staples Center. That had a purpose, ostensibly: Jones claims KSI and Logan Paul really hated each other, and both wanted to injure the other. Logan Paul’s new fight is basically devoid of purpose — other than to make those involved even more stinking rich.

The gravitational pull of the Pauls — and curiosity around seeing social media stars’ faces potentially mashed into a pulp — has managed to convince people to buy. But the in-ring action has been lackluster. During Jake’s match against Ben Asken, the two seemed to hug each other more than they actually fought. And Jake won within two minutes, shorter than the length of legendary boxing compere Michael Buffer’s introduction of both fighters. Some UFC stars expressed suspicions that the bout was fixed.

“I don’t think Jake Paul is completely inept,” says longtime New York boxing promoter Lou DiBella. “He has a little bit of athletic ability. But Logan Paul couldn’t beat whoever — I don’t even know who the guy is? KS-One? KSI? I don’t know, whoever the fuck the guy was.”

However, DiBella, who is 60, knows that some people do know who these people are, and do care. “It’s sort of like apples and oranges,” he says of comparing the influencer events to traditional bouts. “It’s pop culture, but it’s not boxing.” But unlike many in the boxing world, including multiple time world champion Lennox Lewis, who said YouTuber events are a “farce, not my beloved boxing,” DiBella doesn’t have an issue with it. “If people want to pay for it, and people care, then God bless you,” he says. “You’re entitled to be entertained how you see fit, and you’re entitled to spend your money the same way.”

“A bunch of 14-year-old girls came up to me and wanted to talk about Jake Paul and influencers boxing.”

For now, the June 6 event seems to have enough oomph to draw an audience. A couple of weeks ago, DiBella was at a bar mitzvah for a friend’s child. “A bunch of 14-year-old girls came up to me and wanted to talk about Jake Paul and influencers boxing,” he says. “Now, these were little girls that have no knowledge of boxing whatsoever. They’re on TikTok. They’re on Instagram. They’re on Triller. They know who Jake Paul is.”

The biggest question for the Pauls and all those riding their coattails may not be how well June 6 goes, or even who wins. (Mayweather is a 94.1 percent favorite to win, so unless something goes drastically wrong, you can save your money, go to bed early, and wait for the clips on YouTube the following morning.) It’s what happens next.

As any savvy social media creator knows, it’s important to change up your content to keep people engaged. The audience is “like a kid on Christmas Day,” Jones says. “They go downstairs, and they open the present. They go: ‘Wow! This is great. This is new!’ Then they throw it to one side, because they want the next thing and the next thing. I’m quite impressed, to be honest, that Jake and Logan have managed to drag more money out of YouTube boxing.”

Jones wonders what could possibly be next for the Pauls to keep people engaged. It would be hard for Logan to top fighting a name like Mayweather. Jake, he surmises, is “going to keep fighting out-of-shape MMA fighters and people he can beat so he can keep his Showtime contract. Jake’s not going to take on a real boxer at any point, because that would ultimately null and void his career.”

Viewers should know what to expect in exchange for their cash: lots of talk and very little real action.

By now, the novelty factor is wearing off these boxing events, and viewers should know what to expect in exchange for their cash: lots of talk and very little real action. The Jake Paul versus Ben Askren fight was more notable for host Pete Davidson’s backstage skits and Oscar De La Hoya’s incomprehensibly drunken commentary than anything in the ring, or involving actual social media stars.

And that’s a problem for YouTubers. They’re becoming more and more distanced from the main reason people follow the social media celebrities — people watch the Pauls, or those taking part in the June 12 YouTube–TikTok event, for insights into their lives, not to see pantomimed beef, like the hat-stealing stunt, that would be too corny for professional wrestling. And none of them are good enough at boxing to entertain real fans of the sport.

The Pauls have had their fun, and seem to have made their money, but this is all feeling very tired. It’s time for them to throw in the towel and find another new, probably ridiculous, way to connect with audiences and, once again, prolong their brand.