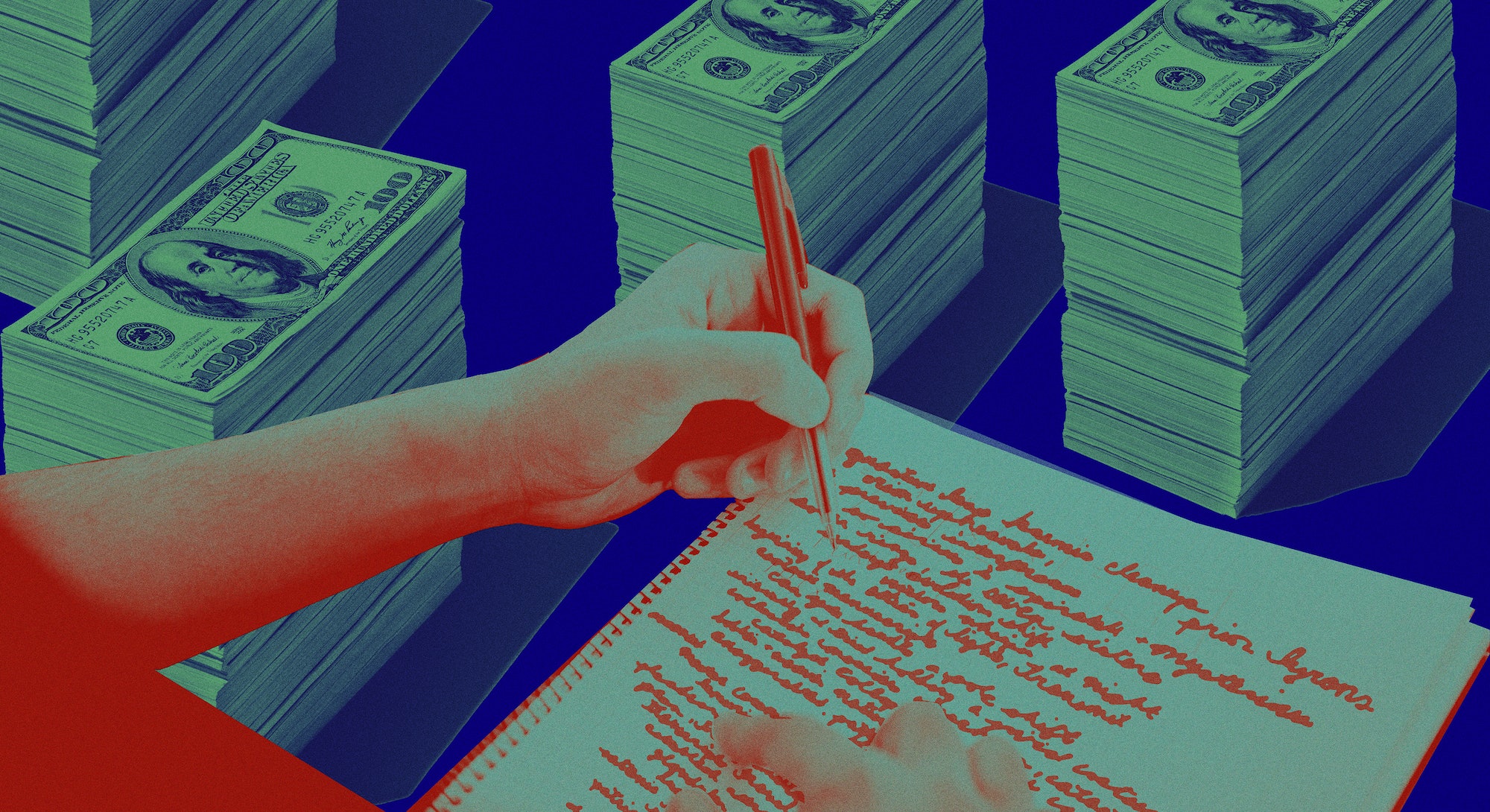 Kevin says he’s always been known as a good writer — a reputation that only blossomed in his Canadian high school.

“Word spread pretty quick around my 700-person school that I’m the best writer in the school,” he recalls.

The word spread to 15-year-old Kevin’s workplace, McDonald’s, where he flipped burgers. His teenage colleagues began joking with him, saying they’d pay $20 for him to write their papers. “It sounded funny at first,” Kevin says. “Then eventually, I was like: Twenty bucks? That’s more than I make in three hours.”

So he said yes.

Kevin (an alias) estimates he wrote around 50 papers for his high school classmates before moving on to college in the Northeast U.S. There, he worked at the university’s writing center and tutored fellow students in economics. After graduating, he got a job in finance and recommenced his paper-writing hustle, this time for college students.

“The stereotypical [client] is ‘daddy’s credit card.’ But the vast majority of the people that use the service — and I’m talking 90 percent — have a job.”

In December 2016, he formalized his essay-writing services, launching an Instagram profile and website that he called Killer Papers. Kevin wrote the first hundred or so papers for free. “I did it just to get reviews and knowing that word would spread eventually,” he says. It worked.

Killer Papers, based in Canada, is one of a number of so-called essay mills that write papers for clients in exchange for money. And as kids head back to school this fall, business in the industry is about to pick up. “A slow month is August, and a busy month is October,” Kevin says.

He now has around 60 writers who produce between 200 and a thousand papers a month, with prices ranging from $17.50 to $32 per page. Though Kevin is coy about sharing specific numbers, he will allow that the site’s revenue is in “the low seven figures.”

With paper mills, the quality of the end product varies wildly, depending on which service you use and what price you pay. The Killer Papers site emphasizes that its writers “are ALL American or Canadian college graduates,” in contrast to cheaper overseas competitors that employ writers for whom English is a second language.

But Killer Papers isn’t a paper mill, the company insists. “Killer Papers is a tutoring service,” reads a disclaimer on the site. “KillerPapers.org custom projects are not intended to be forwarded as finalized work for academic credit as they are only strictly meant to be used for research and study purposes. Killer Papers does not endorse or condone any type of plagiarism.”

Those who use Killer Paper’s services generally fall into two camps. “The stereotypical one is ‘daddy’s credit card,’” Kevin says. But that isn’t his core customer base. “The vast majority of the people that use the service — and I’m talking 90 percent — have a job. A lot of them are older than you might expect.” They’re people, Kevin says, whose busy lives mean they don’t have the proper amount of time to dedicate to their classwork.

Killer Papers user Deke (not his real name), a 24-year-old from Texas, was more of the stereotype than the average customer. He first heard about the service from a friend during his freshman year of college, where he was studying marketing. Deke estimates that he paid more than $1,000 for around 10 papers. “I know I spent a pretty penny, and that’s probably because I’m fortunate enough to have family support me on the financial side,” he says.

Deke says he used Killer Papers to help him with his heavy course load, which he took on so he could expedite his entry into the working world. He admits he never told his family where their hard-earned cash was going. “Even if I tried to explain to them, they’re immigrants and didn’t really go to school,” he says. “They wouldn’t really comprehend it.”

Deke claims he never submitted a paper that wasn’t his own work. “When I got the papers back, I tweaked them,” Deke says. “I worked on them.” He says that the essay-writing service helped him come up with the concepts and ideas for his essays. “That’s where I really needed help. When it came to opening up a Word document to type stuff, I just kind of blanked out. I’m like, Where do I start?”

Deke got As for every essay he submitted except for one — the result of an uber-strict professor, he says. He graduated in 2020 and started working for an NFL team; he’s now employed in the oil and gas industry. “It helped me out pretty well in terms of getting me to where I am now,” he says. He adds that his fear of the blank page has disappeared, and he’s able to proficiently write reports for his job.

Passing off someone else’s work as your own — plagiarism — isn’t illegal. But it is unethical.

Thomas Lancaster, senior teaching fellow in computing at Imperial College London, has been studying academic integrity, and essay mills’ role in destroying it, for more than 20 years. “Students see lots of temptation,” he says. “They see offers to do work for them, often disguised in the form of saying it’s ‘support’ or ‘help,’ not directly linking itself to being cheating. A lot of this is deceptive, and there’s a lot of blurring the lines between cheating and acceptability.”

Beyond the impact paper mills have on the value of academic degrees, Lancaster worries about the effect they have on students. “For students who think they’re just buying one piece of work, the problem is they then miss out on some of the core foundational knowledge we expect them to have,” he says. “When they go on to do a later assignment, they just struggle to do it.”

“We’re informing clients before they sign up that we’re not encouraging them to plagiarize anything.”

Those involved in essay-writing services deny that they’re damaging the integrity of the educational system. Courtney, who is in her 20s and lives on the East Coast, has been working with Killer Papers since 2018. She was an English and education undergrad at college and moved into teaching kids. “I felt very confident in my ability to proofread and edit and provide pretty much any writing service,” she says. “I just really enjoy writing.”

She signed up for Killer Papers, she says, because while she felt confident in her ability to craft an essay, she was conscious others might not. “I really liked the idea that it was providing support for students who might not have the same skill set that I had,” she says. “It felt nice to be able to help people.”

In March 2022, she left her job teaching and became a full-time essay writer for Killer Papers. In part, it was the money, but she also felt like the pandemic’s disruption of education meant she couldn’t make as much of an impact on kids’ learning as she wanted to. She tries to write between 15 and 30 assignments a week, depending on length. That allows her to match her $45,000 teacher’s salary, she says.

When she’s asked how she feels about the morality of what she does, Courtney demurs. “We’re informing clients before they sign up that we’re not encouraging them to plagiarize anything,” she says. “And we’re not encouraging them to submit any work.” Kevin, Killer Papers’ founder, makes similar points. “They’re assigned limited usage rights,” he says. “Basically, it’s for inspiration or study purposes. You’re not allowed to reuse it or anything like that.”

Kevin says that you wouldn’t hold a gun manufacturer liable for what someone does with a firearm so you shouldn’t hold Killer Papers liable for any students who decide to submit work the service produces as their own. “Everybody has free will,” he says.

When Input points out that many people do think gun manufacturers should be held liable, Kevin counters that you wouldn’t hold alcohol producers responsible for the actions of someone who’s drunk. When Input points out that cigarettes are similar — and that the tobacco industry has been held liable for its impact — and asks whether he really doesn’t believe kids aren’t passing off his essays as their own, Kevin asks to go off the record.

Courtney holds the line firm. “It’s fabulous to support students any way that they need, but in the same way that I couldn’t control my students in the classroom not submitting homework, I also can’t control what a student does with content that’s been submitted to them,” she says. “They’ve signed an agreement that they’ve read on the site, and they see we’re not condoning it in the slightest.”

“People in general assume that I really don’t care about the product I’m producing, and I’m just doing as many as possible to make money. That’s just not accurate.”

That she’s part of an industry fueling cheating is the biggest misconception people have about her work, she says. “People in general assume that I really don’t care about the product I’m producing, and I’m just doing as many as possible to make money,” she says. “That’s just not accurate. I genuinely care about supporting students, and I want them to feel confident in the process.

“I encourage feedback,” she continues. “I encourage questions and critiques and everything, because not only does that help me to improve, but it makes them feel more comfortable that I’m not just some robot or some random individual with no other purpose than a paycheck.” Such communication happens via a chat function on the website.

Kevin’s vision for the future of Killer Papers is a confusing one. “I don’t see a world where three years from now we’re still selling custom essays, to be honest with you,” he says. Instead, he foresees the essay-writing service disappearing, to be replaced by bona fide tutoring services. Meaning Killer Papers may someday rebrand. “We need a name that transcends essay writing, to be something that can compete with [high-profile online tutoring service] Varsity Tutors,” he says.

Perhaps it’s a tacit admission that he wants to go totally legit. In a pre-interview email to Input, Kevin struck a more reflective tone regarding what he does for a living. “The reason I thought I picked this business initially is because I was good at writing, I liked writing, and people were willing to pay me to do it,” he shares.

“But the truth is, I picked it because I was desperate and knew I had what it took to make it work, at least enough to get me out of the corporate job and two-hour commute I hated,” Kevin continues. “If I hadn’t been so desperate, maybe I’d be changing the world right now.”