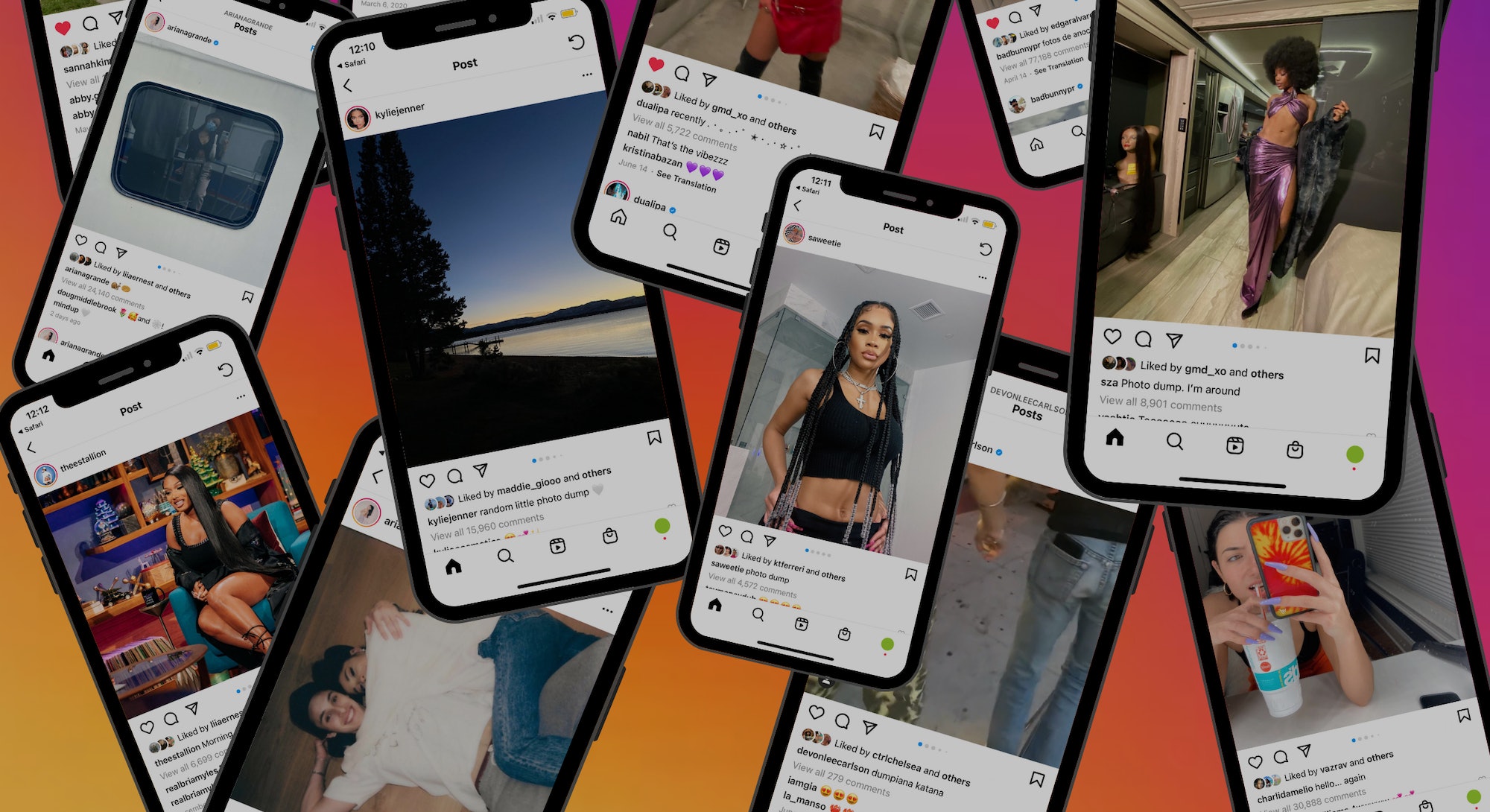 Not that kind — but the kind from your camera roll, involving a carousel post of random pictures tied together by one nonchalant caption. Over the past year, you’ve probably noticed more and more “photo dumps” on your feed, or even posted a few of them yourself. After all, if one photo says a thousand words, a photo dump is practically a novel.

Think of Instagram dumps as your aunt’s random Facebook albums: Many of the photos are unrelated to each other, from different times or places, and offer little to no explanation of why they were posted. Casual selfies are mixed in with pictures of food, sunsets, and candid shots to give you an overall “vibe.” Images included in a dump post are often unremarkable or unworthy of their own solo posts — which is exactly why we love them.

Low-effort and haphazardly put together — hence the term “dump” — the gallery posts can be widely attributed to the events of 2020. As a result of the pandemic, which fueled a year of loss, grief, and overall melancholy, curating an Instagram feed has become a practice of the past. During quarantine — when no one had any Instagram-worthy events to attend or dress up for — photo dumps became especially popular.

Tired of the themes, filters, and edits, many adopted the “anything-goes” mentality that defined 2020 and applied it to their Instagram feed. In the last month, there have been over 700,000 uses of the phrase “photo dump” or #photodump in the U.S., Instagram shares with Input. Social media posts are more casual and authentic, as if it were 2013 again — minus the bad filters.

Sannah Kim, 21, describes the photo dumps more simply: They act as a digital diary of sorts, or a “personal scrapbook,” she told Input. When COVID-19 forced many to stay home (including even the rich and influential at one point), Kim says people began to see their everydays differently.

“I hated how I used to care about keeping a theme or how people perceived me.”

As a film student at Boston University, Kim notes she has always been encouraged to look for inspiration in everyday life, but she says the pandemic made everyone do so. “Being at home and in a slow-paced environment, people started to see the fine beauty of life’s small things.” Kim explains, pointing to pictures of sunsets and home-cooked meals as examples. The overwhelming loss that surrounded last year too, she says, forced people to look for happiness where they could — which was often at home or outside.

Prior to the pandemic, Kim notes, Instagram felt like work. “I hated how I used to care about keeping a theme or how people perceived me,” Kim says. “Posting what I want takes stress and pressure out of posting on social media.” Even as a “regular” person, Kim feels Instagram became a showcase of people’s best qualities, where everything had to be refined.

But elsewhere on the platform, people post their worst: Finstagrams, or fake Instagram accounts, homed posts about users’ personal lives without filter. Usually limited to a few followers — made up of the account owner’s close friends — the finstagrams were used to share everything from everyday nuisances to intimate relationship details.

Dumping has become an extension of the fake accounts: Instagram users are now taking to their main feeds to share snippets of their life. Except the seemingly random gallery posts are still curated for a larger following, says Kim. Despite the nonchalance of the photos included in the dump, each was specifically chosen to be published on Instagram.

Photo dumps may be the closest we get to authenticity.

Celebrities who have gotten into the trend — of which Kim highlights Bella Hadid, Emma Chamberlain, and Devon Lee Carlson — perhaps post the most obvious example of curated dumps. Hadid’s photo dumps include a blurry selfie next to a photo shoot candid, while Carlson posts memes next to a picture of a gifted Versace bag. The notion seems to be that pairing objectively cool posts alongside easygoing ones offers an air of social media effortlessness: an I don’t really care, do you? attitude.

Captions further this demeanor: "Random !" Hadid titles one of her roundups, ignoring the fact that out of thousands of photos taken, she’s hand-selected the most outstanding few to publish to Instagram. “Everything on social media isn’t real,” Kim says. “Everything is still the best.”

Yet photo dumps may be the closest we get to authenticity. Like Kim mentions, the carousel posts bring Instagram back to its original roots as an online scrapbook — something Instagram chief Adam Mosseri states the app is no longer.

In a recent IGTV, Mosseri says Instagram is “no longer a square photo-sharing app,” referencing the app’s launch in 2010. Over the past decade, Instagram has evolved to embrace creators (AKA rebranded influencers) and Reels (AKA rebranded TikTok) alongside photo-sharing — which won’t be disappearing, a spokesperson for the social media giant tells Input.

Still, Instagram users don’t seem to want to engage in the app’s new features, instead favoring the authenticity of posts like photo dumps. “Honestly, [it] would be great if you just went back to being a square photo sharing app,” reads one comment below Mosseri’s announcement. “If I wanted Instagram to be TikTok, I would use TikTok,” reads another.

“We put people and their experience first,” the Instagram representative says of the update. “It’s about finding the right balance for our users — between the content they see from friends and family compared to brands and businesses.” Instagram adds that people’s sentiments will be closely monitored via surveys and research, though comments on the platform itself seem to say enough: Let the people dump.

No matter what new features Instagram rolls out — or what the app is or isn’t — users will continue to make it their own. Authentic or not, people seem to enjoy sharing their isolated moments of beauty rather than something made for an audience, as much as Instagram encourages us to become “creators.”

Photo dumps are relatable; it doesn’t matter how many likes they get or who comments. Dumps simply ask, What’s the worst that can happen? Probably nothing. Why care?

This article was originally published on July 13, 2021