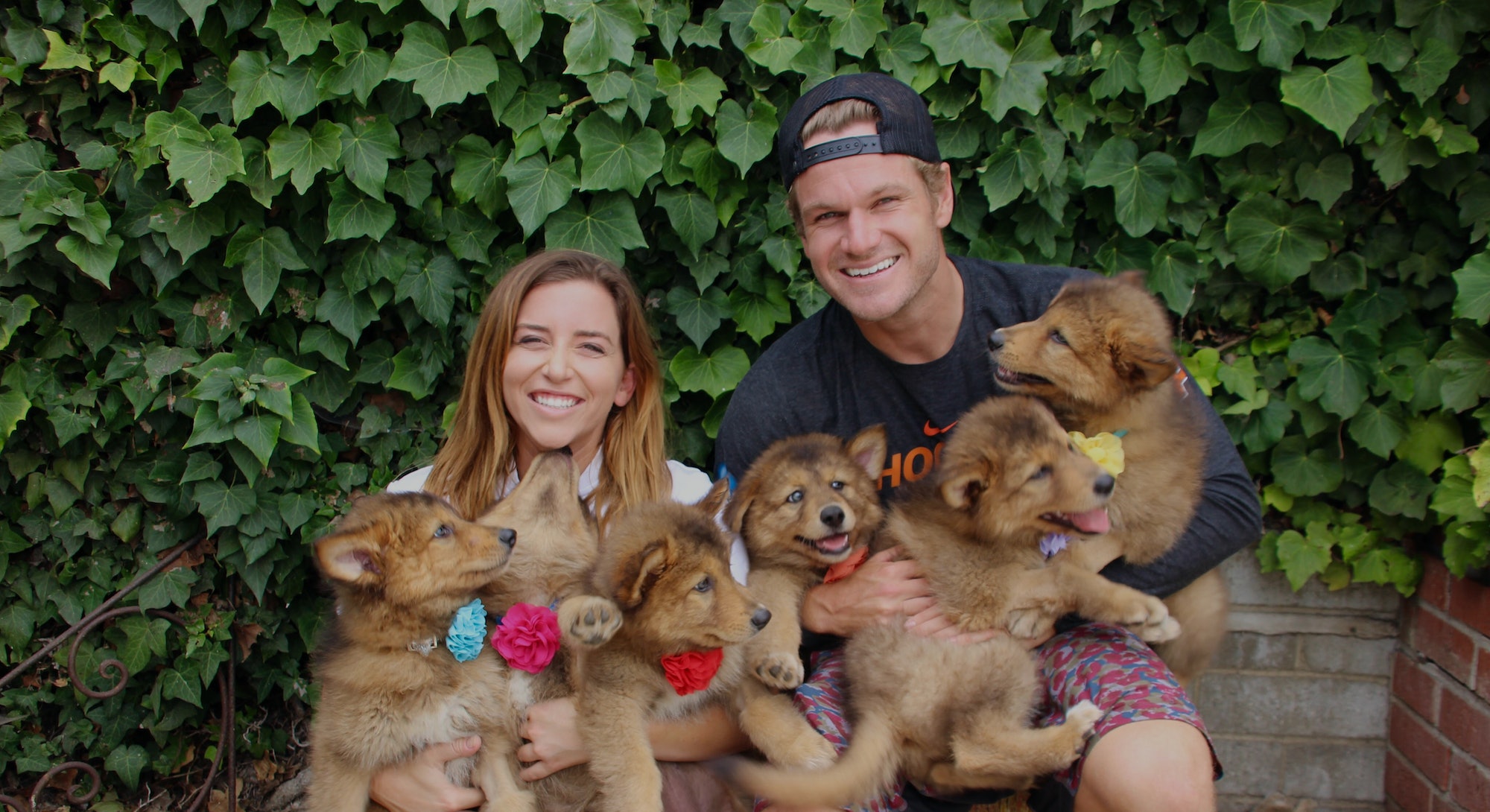 Photographer Courtney Udvar-Hazy began the Instagram account @wander_with_willow in 2017 to document the life of Willow, her striking wolf-dog hybrid.

Udvar-Hazy, a 29-year-old from California, documented Willow from the moment she got her, and followers watched Willow grow from a tiny puppy to a strapping adolescent who roamed California’s wilderness on hikes with her owner.

Then, in 2018, tragedy struck: Willow escaped from her pet sitter and was struck by a car. “When I got there, she was still alive. My friend was driving us to the vets,” Udvar-Hazy says, her voice quavering. “She passed away while I was holding her in the backseat.”

Yet Udvar-Hazy continues to run @wander_with_willow to this day. If you didn’t know any better, you’d think that recent photos of the enormous canine creeping through the snow, howling in the woods, and sitting in front of a mountain range were of Willow. But the subject of these pictures is in fact another, identical-looking wolf-dog named Phoenix. Phoenix, now age two, is a clone.

Udvar-Hazy, 29, used the Texas-based company ViaGen — which famously duplicated the singer Barbra Streisand’s dog Samantha in 2018 — to clone Willow. She ended up with Phoenix, plus five other genetically identical pups that she gave to friends. (Occasionally, the lookalikes have reunions, which Udvar-Hazy documents on her Instagram account.) To some observers, this seems bizarre, even grotesque. “I get a lot of crap about cloning,” says Udvar-Hazy. “People say I have zombie dogs, or they call me a crazy rich girl. It was hurtful to me at first.”

Although Udvar-Hazy’s pack of clones may seem exceptional, the act of bringing back a pet is becoming more common — and it’s especially evident on Instagram. The team behind top petfluencer Tinkerbelle, a five-pound papitese with more than 500,000 followers on Instagram, revealed in 2019 that Tinkerbelle’s DNA was being stored for cloning. (The announcement post is labeled a “paid partnership” with ViaGen.)

The account @ipartywithbrucewayne, which has 55,000 Instagram followers, features four cloned chihuahuas who appear alongside the original, Bruce. Meanwhile, smaller petfluencer accounts like @clash_of_the_clones, @the_peanut_clones, and @baxter_the_clone, openly tout the fact that the dogs on display are genetic replicas.

Together, these furry duplicates are normalizing the world of animal cloning — and they could be ushering in an era of petfluencer immortality. “Someone could clone their pet and replace the original. The world doesn’t have to know. They may never know,” says Melain Rodriguez, client service manager at ViaGen, which is behind the cloning of all the animals mentioned in this article. “Especially if it’s one that looks exactly the same and they can just continue with that pet.” (Rodriguez notes that the cloned pets aren’t “reincarnations” and will have different personalities than their predecessors.)

The process, however, is complicated and expensive. The price tag for cloning a pet ranges anywhere from $35,000 to $50,000, depending on the animal. “It's very similar to IVF,” explains Rodriguez. “The eggs and the embryos are created in a dish, and then they’re transferred into the surrogate.” She adds that customers often stomach the cost due to the emotions involved: “If you’ve ever had a wonderful pet that you love so much, it’s so hard to lose them. A lot of our clients are in that situation.”

For Instagram’s petfluencer owners, grief is a common motivation for cloning. “I had a really special connection with Willow. I’d take pictures of her daily. She was my muse,” says Udvar-Hazy, who paid for the procedure with her savings and family assistance. “The biggest thing for me was to have her legacy carry on and to continue the bloodline. I was not in a good place at the time. I figured it would be something that would heal my heart a bit.”

Kelly Anderson, a 32-year-old dog trainer from Texas, has a similar story. “Chai was my soulmate, and cloning was a coping mechanism for losing her,” she says of her cat. Anderson explains that Chai, who died in 2017, was a support system when she was battling depression and an eating disorder.

Before Chai’s passing, Anderson’s Instagram account, @adogandacat, had accumulated 64,000 followers. But the feline’s death brought Anderson’s social media activity to a screeching halt. “I built my followers up from scratch by just busting ass, and when Chai died, things started crumbling,” Anderson says. “I definitely dropped off the face of the earth.”

Although the cloning process allowed Anderson and Udvar-Hazy to tackle their grief — and to continue making content — their decisions had their drawbacks. For Anderson, the worst part was the waiting. “It took about four years for them to successfully clone Chai — it definitely took a toll on me,” says the Instagrammer, who paid for the process with help from her family.

Anderson tells Input that ViaGen asked her to withhold how many rounds of animal IVF it took to produce her cat clone, Belle, who was born last year, but she did share that the wait impacted her Instagram account. “I lost a lot of followers and a lot of engagement,” she says. “I’m slowly starting to build that back up now with Belle.”

Udvar-Hazy had more success. Willow’s clones were born in 2019, less than a year after her death. The challenge for Udvar-Hazy was winning over the hearts and minds of her followers. Comments under Udvar-Hazy’s announcement of Willow’s cloning are sometimes vicious — some followers chastised her, and many said they’d have to unfollow her. “There’s a lot of rude, mean people who are very judgmental in the wolf-dog community,” Udvar-Hazy says.

Critics have frequently raised concerns about the ethics of cloning pets, as it involves putting surrogate animals through the difficult IVF process. Also, some argue that it seems decadent, given that there are 6.3 million animals entering U.S. shelters every year. (Rodriguez says that a number of cloned-pet accounts on Instagram — including her own cat account, @holdtheclone — are run by ViaGen staff members. “If we have a client who has more clones born than they can take, we always reach out to our staff first,” she says.)

Despite the controversies surrounding cloning, influencers still seem eager to sign up for the process. While Tinkerbelle’s team refused Input’s requests for comment, others are more open about their intentions. “I will definitely clone Bentley in the near future,” says Violet (an alias), who is behind @bullygeek. Bentley, the American bulldog who was the focus of the account when it launched, died in 2020; the account is now dedicated to Violet’s (non-clone) French bulldog Mayo. “It would just be a dream come true to have Bentley back in my life,” she says.

“If someone made a living off of their pet and then suddenly their pet is gone, what do they do?”

ViaGen has clearly spotted an opportunity. Rodriguez, citing privacy reasons, wouldn’t comment on how many influencer clones exist or what sort of paid partnerships the company has entered into with Instagrammers. But she sees influencers cloning their pets more often in the future.

“If someone made a living off of their pet and then suddenly their pet is gone, what do they do?” she asks. Rodriguez has pointed this out to Instagrammers at petfluencer conferences, and felt they found her viewpoint eye-opening. “They were all amazed,” she says. “We definitely got some clients that moved forward with preserving the cells.”

Anderson is still preserving her cat’s DNA, but doubts she’ll do anything with it. “ViaGen’s holding onto Chai’s remaining samples for me as a courtesy, but I have absolutely no intention of ever cloning again,” she says. Anderson feels she’s now in a better place to cope with grief, and would not need to clone another pet after its death.

Still, she looks forward to seeing what the future brings on Instagram. “The idea of carrying on a world-famous pet is fascinating to me,” she says. “It’s only a matter of time until one of them does it.”