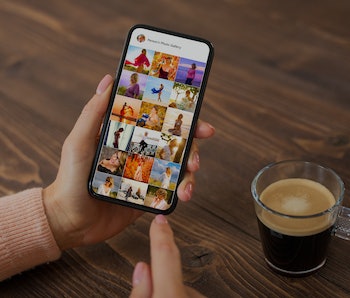 According to Alessandro Paluzzi, an engineer who frequently reverse engineers social media apps, Instagram is working on a feature that would allow users to rearrange their profile grid.

Aesthetically-inclined Instagram users seek out a clean, pleasing grid with a flawless color balance and consistent style. The ability to rearrange takes away the problem of, say, having one photo appear incongruous with those around it: you can simply re-order the pictures until the colors are distributed how you want them.

Another potential use is to bury less flattering photos. Perhaps you have a post that you don’t want to delete or archive but you also don’t want to feature front and center. With a rearrange feature, you could move it lower, where only the most dedicated profile-stalkers would find it.

What’s the appeal? The feature would allow users to meticulously prune their profiles into artful mood boards, making the app even less about photo life updates and more about projecting a perfect image.

Impromptu snaps and irreverent musings can be posted indiscriminately on the Instagram Story, but the Instagram profile seems to be increasingly reserved for more important and aesthetic photos. The profile grid has been used as a canvas for years, and there’s no shortage of features to test out how a photo would look in the grid before pressing “post.”

There’s a sleek, sophisticated feel of a consistent grid: whether it’s the rainbow-hued selfies from @ionaverley, the checkerboard theme of informative accounts like @solidstarts or @so.informed, or the iconic retro TV-style grid that Dylan Sprouse has going on.

Note that last week, Instagram officially announced the return of the chronological feed — as well as two other feeds.