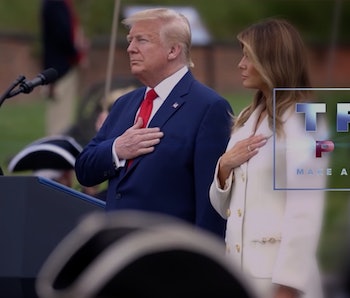 As if anyone needed more evidence that we live in hell, Donald Trump's campaign has taken over the YouTube homepage with an autoplaying ad that is driving users absolutely insane. Because we are being tested by whatever higher power exists and obviously hates us, these videos will run for the entirety of the Democratic National Convention and again on Election Day. The good news is that we may have found a way to stop them.

The video in question appears on YouTube's homepage for all users in the United States and autoplays clips of Joe Biden, who is notoriously known as a "gaffe machine" for his stutter while his current rival openly admits to sexual harassment and muses on getting away with murder, losing his train of thought. It then implores you to stop the "radical left" by flashing pictures of Bernie Sanders and female BIPOC like Representatives Alexandria Ocasio-Cortez and Ilhan Omar. According to the ad, Joe Biden, who has not come out in support of Medicare for All or universal free college, is a left-wing extremist. The video was posted multiple times to Trump's YouTube page on Saturday and already has millions of views.

Propaganda — Users are reporting that the ads are autoplaying no matter what they do, even when they can't see them. The issue many are likely running into is that an ad-blocking extension they have installed may be blocking the ad from sight while the audio for the ad is still playing, thus preventing users from muting or pausing it. Even if you can see the ad, the usual "stop seeing this ad" feature is not being provided for this particular video. Infuriating.

Hope and Change — There are a few ways to stop the video from dominating your YouTube experience over the next few days. The simplest method is to sign up for YouTube Premium, which removes all ads on the service, for the comical price of $11.99. If you are rich, God bless. Please donate to Black Lives Matter.

The second involves trial and error with ad-blocking browser extensions. YouTube has gotten crafty in the last few years after wising up to the number of users who had opted out of their ads without ponying up for Premium. Reports on Twitter have indicated that AdBlock is not effective but that uBlock Origin is, which has held up in our testing. YouTube will likely take notice of this and attempt to combat it, so your mileage may vary.

The third method is YouTube's official method, though many users are complaining that it is not entirely effective at keeping the video at bay. If you're a narc who must obey the rules: You simply click on the tiny circles on the right side of the header and click "Close Ad." This is supposed to keep the ad closed for the remainder of its run but we can all guess just how much Trump and YouTube are incentivized to ensure that this feature works correctly.

Make YouTube Great For Once — YouTube allows any politician of any party to buy ads on its platform. While not as egregious as Facebook's policies, which allow politicians to pay for the privilege of lying to its users, YouTube should consider if it wants to further swing its user base towards a violent political extremist like Trump. If they're concerned about the appearance of favoring the left, which they do not, they can always adopt a policy like Twitter, which does not allow any political advertising on its platform.