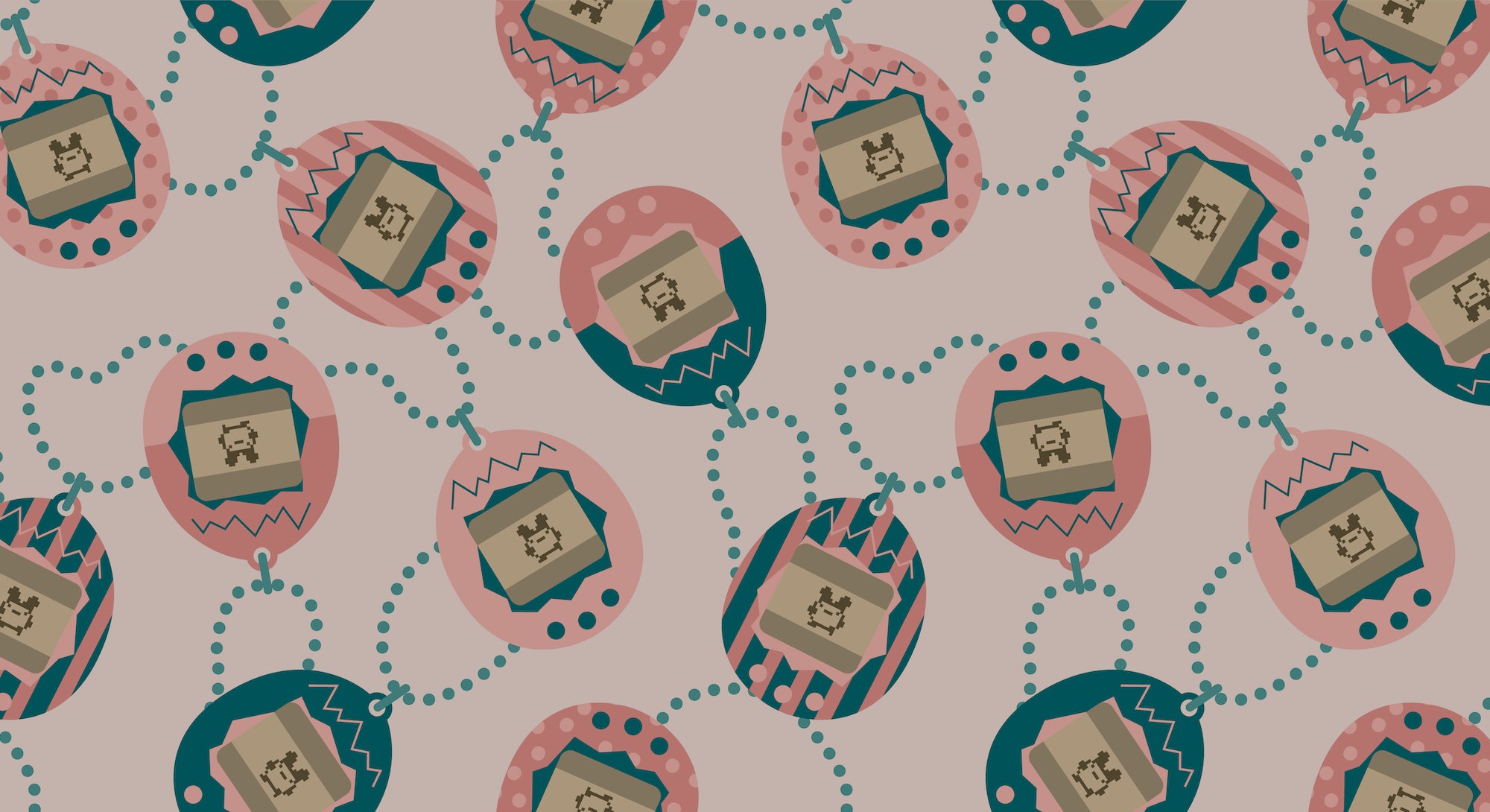 Amid a recent whirlwind of nostalgia, I found myself the proud owner of a Tamagotchi Pix — which, until a few weeks ago, was the latest model from the Japanese toy company, Bandai, that fueled the virtual pet craze of the late ‘90s.

If you’ve ever owned a Tamagotchi, you know what this entails — a lot of feeding, socializing with, and cleaning up after your digital pet. But the Pix offers new modes of interaction. With a color screen and a built-in camera, it’s a huge upgrade to its pixelated predecessors.

By the end of the first day, my Tamagotchi and I had already visited a restaurant, shopped for new accessories, met friends in the park, and conducted a photoshoot together. This last option is one of the many benefits afforded by the Pix’s camera. Through an “explore” function, a user’s Tama character is able to engage with the real world — its miniature body suddenly magnified to become a photo filter.

With a Tamagotchi overlay, it’s like learning to selfie all over again.

Gleefully, then, my device’s photo album was already beginning to fill up when I heard my boyfriend clearing his throat. Looking up, I caught him staring daggers at us — my Tama and me — from across the room.

“It’s going to drive us apart,” he joked, not knowing that two weeks later we’d be at a Pride event where he mingled with friends and strangers while I missed most of what was happening, hunched over my desperately hungry Tama and unaware of the bubble we’d created in an otherwise crowded venue. Still, it seemed to me that our little family was about the gayest thing at Pride.

As a matter of fact, in rekindling my relationship with my Tamagotchi, I realized just how many of my interactions with this virtual pet — both then and now — are coated in queerness.

Yet, a lack of queer dynamics tends to be exactly what fan forums devoted to these virtual pets seem to be most frustrated by. Users are likely to point out Bandai’s complicity in anti-LGBT politics, the device’s adherence to (arbitrarily) gendering these amorphous pets as male or female, and an absence of same-sex representation in past Tamagotchi models where two Tamas were able to become romantically linked.

These, of course, are valid complaints, especially as they run counter to so much of what feels subversive in these egg-shaped worlds — “Tamagotchi” being a portmanteau that combines the Japanese words “tamago” (egg) and “utochi” (watch).

In response to the limited representation that is officially sanctioned by Bandai, I’ll explore here how these digital pets nevertheless operate on their own queer planes, while offering suggestions for how users might more effectively bring their Tamas up gay.

Imagine it’s 1998. The crumpled paper bag that housed your lunch is nearly empty. You reach in and pull out your Tamagotchi. After all, virtual pets need to eat, too. A groan ripples out from the fourth-grade boys who surround you. Having shamed you the appropriate amount, they return to their battle.

For at the same time that the sleek and colorful Tamagotchi was being marketed to girls, Bandai released what Wikipedia refers to as their “masculine counterpart.” Digimon were, like the Tamagotchi, positioned as virtual pets, but these pets were raised with a purpose — to fight.

The Digimon/Tamagotchi divide presents just another example in which competitive masculinity is pitted against caring femininity. The attitude of your lunchroom bullies attests to the success of toy companies’ marketing campaigns.

Perhaps ironically, then, you find an ally in your Tama. While you ignore the cafeteria critics to ensure that your pet is fed and their room clean, your Tama develops subversive practices of its own.

With the new Tamagotchi Pix, the Tama expresses accessory preferences that often mirror a disregard for gendered social conventions. My male Tama, named Mametchi, remained fixated solely on the clamshell hat that I purchased for him. Every time I tried to dress him differently, he prompted me to return his pastel cap.

So often, queer kids are discouraged from choosing their own clothes, accessories, and appearances. Raising your Tamagotchi to be gay might mean respecting these choices instead.

Sure, in the case of your Tama, these choices are likely a result of an algorithm, but getting into the whole nature versus nurture debate is a separate conversation.

Tamagotchis are technically virtual “pets,” but as many a pet parent can attest, the line between owner and parent is a flexible one.

This line is further blurred by the anthropomorphic Tamas, who do everything from designing clothes and conducting science experiments to sending mail to their virtual friends and interacting in written English or Japanese.

What does it mean to “own” such a sentient being? Needless to say, the role that the user is meant to play in their Tama’s life can be a confusing one. Consider, for example, the new petting feature of the Tamagotchi Pix, which invites users to rub their fingers across the device in order to “pet” their digital companion.

The Tama, however, is framed onscreen in such a way that it becomes difficult not to imagine where (or what) you must be “petting.” Running your fingers across the buttons positioned just below the Tama’s torso causes them to respond with a flurry of hearts and music (in apparent ecstasy) or with a flinching withdrawal if the Tama finds that you have touched them too hard.

3. Introduce your Tama to a wide variety of lifestyles & experiences

In this ambiguous role, it’s important to not only encourage your Tama in their gender-subversive interests but to introduce them to a wide variety of lifestyles and experiences as well.

The late Eve Kosofsky Sedgwick wrote, “It’s always open season on gay kids,” lamenting how even as queerness becomes more socially accepted, it remains undesirable for many parents hoping to produce healthy heterosexual offspring. The 1993 essay where she opposed this tendency is titled “How to Bring Your Kids Up Gay” and serves as the inspiration for the piece before you.

A few friends (and fellow Tamagotchi enthusiasts) appreciated this endeavor and decided to queer their own Tamas experiences as well.

One, for example, opted to take advantage of the Pix’s “cook” feature, which allows users to create meals for their pets by mixing together their camera photos. By feeding her Tama a wide assortment of sex toys, my friend hoped to expand his palette. We compared notes like the caring parents we are.

A mutual friend wasn’t so sure. “But what if your Tamagotchi isn’t gay?” he asked.

Our easy retort: “What if he isn’t straight?” So far, the Tamas seem perfectly happy with our interventions.

And on the subject, one last intervention that must be included here is Alexander Monea’s recent work, The Digital Closet: How the Internet Became Straight. In this brilliant book, Monea addresses how the internet — once a digital playground for queer communities — has gradually become a less welcoming space through increased modes of regulation that tend to unevenly censor queer content. Yet the familiar Tamagotchi can walk us back a few paces to those halcyon days when the digital was still exciting and filled with opportunity without these later pressures of moderation.

As with so many nostalgic arcs, my own return to the Tamagotchi is a return with a difference. My Tama once functioned as an outlet for a proto-gay kid to explore new forms of connection and relationship dynamics, but fast-forward to today and I can see how my virtual pet helped me in navigating from there to here. Raising my Tamagotchi to be gay is just my way of returning the favor.

And on a happy personal note, my boyfriend is finally pitching in. Last week, when I’d forgotten to line up the digital babysitter, he even cooked for my Tama — or dare I say our Tama.