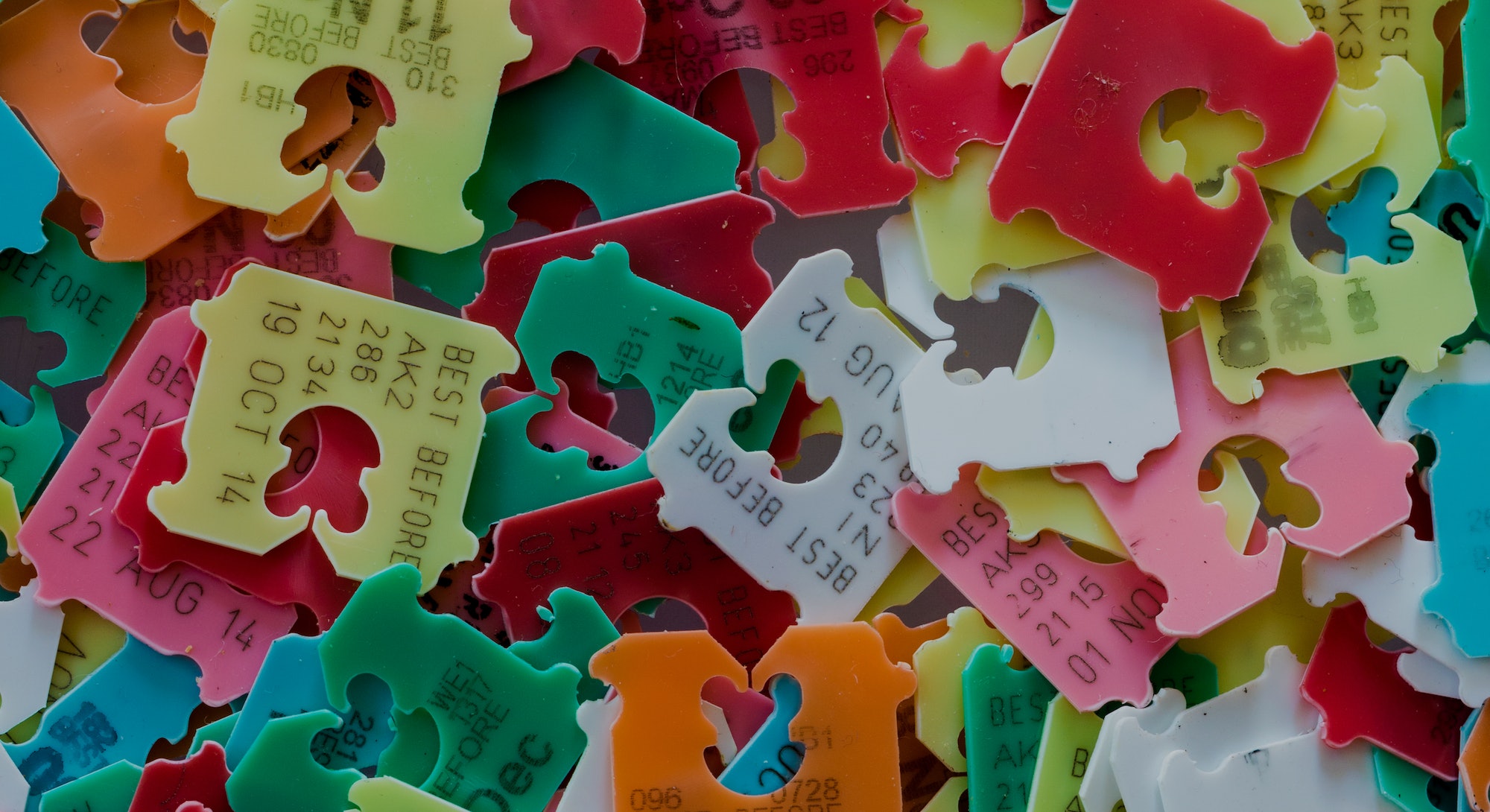 Lately, I’ve been spending time collecting the plastic tags from bagged pastries and sorting them into little Latin-named piles like Palpatophora utiliformis and Tridentidae.

It’s an activity that seems to merit a *record scratch* *freeze frame*: You’re probably wondering how I got into this situation.

It started one snowy winter night when I stumbled upon HORG.com, whose home screen features an official-looking seal bearing a drawing of a bread tag — one of the plastic ones groceries use to keep bags closed — and the Latin phrase Fiat Divisa Panem (loosely translated: “Let it be sliced bread”).

HORG stands for Holotypic Occlupanid Research Group. It is a self-described “database of synthetic taxonomy” dedicated to plastic bread tags, referred to on the site as occlupanids (this derives from occlu, meaning “close,” and pan, meaning “bread”).

It classifies the bread tags into 17 different families, with names like Haplognathidae and Mycognathidae, and further divides the doodads by genus and species, for a total of 208 distinct types (excluding the “Pseudo-occlupanids,” which have a “hotly contested” taxon that some “occlupanologists” find it “too close for cladistic comfort.”)

Some are big in Japan; others are found in “a refrigerated niche” and “may prefer cooler environments.” My favorite is the Spinosacculidae, a rare purple one found near Victoria Falls, Zimbabwe with an “oral groove” that resembles a turtle.

HORG hovers between earnest scientific endeavor and elaborate hoax. The species descriptions take on the formal tone of a field notebook, save for a few playful winks. Take the description for Eurycomplector labiopictus, which are printed with little pictures of lips: “The splotch-like markings… may indeed be some form of camouflage, akin to the spots on a leopard.”

HORG presents itself as some distinguished collection of scientists, but in reality, the “Board of Taxonomy” is just John Daniel, a 50-something San Francisco Bay Area computer graphics and visualization specialist who has meticulously catalogued plastic detritus since 1994. In college, he studied vertebrate zoology and sculpture. While he’s not a practicing biologist, he tells me that he’s “absolutely obsessed with the natural world.”

“It really struck me how weirdly biomorphic it looks, like a larval parasite with claws. Why does no one notice these things?”

“Paying attention to things that are ignored, unloved, or outright detested is something that I find appealing — anything from ticks to butterflies to earwigs,” Daniel says via Zoom from his home office, where he’s proudly hung a framed display of occlupanids.

Like most of us, he’d encountered bread tags his whole life. But he didn’t see them — really see them — until he was 24 and saw “this little plastic doodad” on the floor of someone’s apartment. “It really struck me how weirdly biomorphic it looks, like a larval parasite with claws,” he says. “Why does no one notice these things?”

At that moment, “the blinders came off,” he says. “I started seeing them everywhere.” Taxonomizing the pieces of trash was his “natural next step.” A friend gave him the URL HORG.com — he prefers the snappier HORG.org, but to his chagrin, someone’s been sitting on it — and he used his rudimentary HTML skills to cobble together a site whose design has barely changed over the decades.

Today he’s got a collection of occlupanids contributed by fans from around the world. Daniel admits that certain areas are underrepresented, including China and some parts of the African continent. And he doesn’t get many occlupanid samples from countries that don’t have a lot of processed bread, like France. (In the U.K., the tags are actually banned due to ingestion dangers.)

At its core, HORG is about curiosity and appreciation for man-made detritus. Daniel earns no money from his endeavor — all proceeds from T-shirt sales go to the international Society for the Preservation of Natural History Collections — but he has gained a small measure of fame.

The word occlupanid made it into a 2010 NPR quiz show, and New Zealand’s Wellington Marine Museum and Research Station once named occlupanids its “critter of the week.” Because certain occlupanids are more likely to grip onto the intestines if ingested, medical researchers used Daniel’s classifications in a 2011 peer-reviewed academic article, crediting him as co-author.

Occlupantology is contagious. Fans have organized a tightknit Discord and the r/occlupanid subreddit, which has more than 1,200 members. Then there are his audience’s snail mail letters — Daniel gets 20 a month, some of them accompanied by occlupanid samples. “It’s probably the most wonderful thing in the world,” Daniel says of the letters. He replies to each one on HORG letterhead.

I ask him why people should care about occlupanids. He pauses. “That’s a tough one,” he says, before pointing out the human affinity for categorizing things. As for other everyday items he’d like to see classified? Daniel points to single-use flossers. “They’re so biomorphic, probably because they're meant to be touched by human hands,” he says. “So they've evolved into these strange shapes.”

To me, HORG’s impracticality is exactly what makes it delightful: As other corners of the internet devolved into a noisy corporate hellscape, this simple site remained devoted to the noble, pointless pursuit of taxonomizing pieces of trash. It is not trying to be anything other than what it is.

These days, I notice every occlupanid I see, and sometimes I can even label them. I also find myself paying more attention to the other overlooked “creatures” of the Anthropocene — zip ties, wristbands, and the like. The habit of noticing the stuff of the real world, especially when my eyes are trained on a screen most of the day, has been a most wonderful gift.