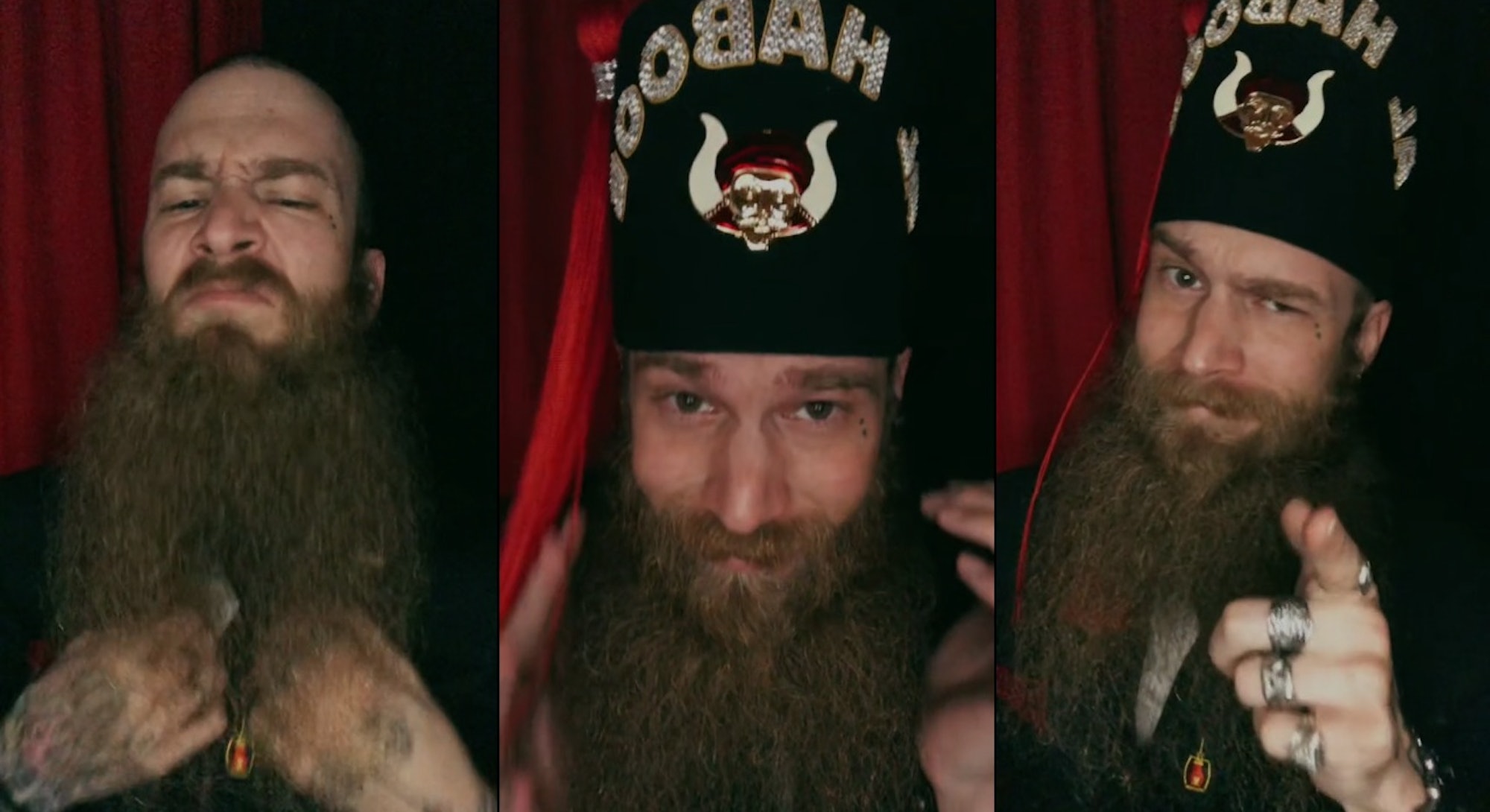 Back in 2013, Tyler McKenzie and his wife were driving through an intersection in Rio Rancho, New Mexico, when their vehicle was struck by a drunk driver running a red light.

The intoxicated driver and their passenger died, while both McKenzie, now 37, and his spouse suffered physical injuries and brain damage, conditions that required rehabilitation. Between those effects and the trauma of the event, the couple — who had an infant daughter — were left unable to work.

As their respective conditions improved, the McKenzies decided they didn’t want to sit around at home. This was how they discovered the Freemasons: A secretive, ritualistic fraternal organization that was started in the middle ages.

The global organization requires that members “believe in the existence of a Supreme Being, although Freemasonry is not concerned with theological distinctions or particular religious beliefs,” according to beafreemason.com, which is sponsored by three of Freemasonry’s major appendant bodies.

The all-male group, which has branches split into different governing bodies known as “lodges,” is largely known for its presidential members — including George Washington, Theodore Roosevelt, and Franklin D. Roosevelt — as well as its special symbols, including the all-seeing eye.

That symbol has long tied the organization to conspiracy theories about the Illuminati, a group that in the popular imagination controls the entire planet. (A classic episode of The Simpsons centers on a group known as the Stonecutters — a parody of the Freemasons — that runs the world.)

The McKenzies, however, weren’t on a quest to gain untold power. They were simply impressed with the group’s devotion to charity and its philosophy of self-improvement. (In the U.S., the Masons raise more than $2.6 million for charity each day, according beafreemason.com.)

Three years after their accident, they became involved with their local Masonry group — McKenzie as a member, his wife as a supporter to his out-of-lodge work — embracing the lifestyle wholeheartedly. And when rumblings began last year at Tyler’s local Freemason lodge about utilizing social media, he stepped up.

He had his work cut out for him. “There’s so much negativity about Freemasonry, and conspiracists on TikTok are nonstop. I figured if we’re going to be on here to teach about Freemasonry, we need to be as calm and correct as possible,” says McKenzie, who has ascended to “master Mason” — the highest rank — since joining his local lodge in New Mexico.

His TikTok account, @harp.o.crates, where he posts spoof conspiracy theories about Freemasonry, has 31,600 followers. “Some would say it sounds kind of cult-like, but I would say it’s definitely not.”

McKenzie is one of a number of TikTok Freemasons who creates videos about the life and philosophy of his chosen fraternity, answering questions from curious followers and battling disinformation about the group. Together, this TikTok brotherhood hopes to rebrand the organization — which many credit with turning their lives around — in the hope that they might attract more members and ensure the survival of Freemasonry as a whole.

Aidan Mattis, a 24-year-old marketing director and TikTok content creator from Pennsylvania, stumbled into posting about Freemasonry. Mattis covers conspiracy theories and creepy phenomena on his one-year-old @theaidanmattis account, which now has 1.2 million followers. He sparked the interest of his audience when he accidentally filmed a clip with a Masonic symbol in the background.

“People started asking more and more questions, and there was a lot of interest in joining the Freemasons. So, I started making all these videos to teach them,” says Mattis, who became a master Freemason shortly after joining his local lodge in 2020, a meteoric rise he attributes to the extra time he had to dedicate to the movement during lockdown, plus his passion for medieval history and symbolism.

Freemasons are not allowed to directly recruit new members, so Mattis’ answers are typically cryptic. His elusive responses have angered some viewers, who think his videos confirm their suspicions about Freemasonry’s nefarious ways. “My favorites are the people who tell me that I’m a lying Satan worshiper while I’m sitting there with a cross on my neck,” he says. “The cognitive dissonance is pretty incredible.”

He feels those folks are missing the point. “The actual guys you should be worried about — the organizations that are running the world — aren’t doing it in secret. They’re doing it right out in front of you,” Mattis says. “And then you’re blaming the Masons? Get a grip, people.”

The Freemasons on TikTok say they are trying to reverse years of dwindling membership. “It’s mainly because of the elders,” explains McKenzie. “They joined at a time when there was a lot of persecution towards Masons. They would just keep their mouth shut — so we’ve actually lost a couple of generations that way.”

He thinks his videos could play a part in solving this Masonic crisis. “I know that we’ve been around for 300 years [in the U.S.] without social media,” he continues. “But because of how prominent it is now, we will lose Masonry if we don’t utilize it.”

The importance of continuing Freemasonry’s legacy weighs heavy on the mind of TikToker Zak Wyatt, a 36-year-old master Mason from Texas who knows just how life-altering Freemasonry can be. Wyatt joined his local lodge in 2019, shortly after a string of traumatic events. He lost his job, home, great-grandmother, grandfather, and favorite dog in quick succession — and was living in an RV trailer with his wife, who was pregnant.

His circumstances have since improved. “It is probably one of the best things that’s ever happened in my life,” says Wyatt, who has 12,300 followers on his TikTok account, @brotherfluffmm. “Even my wife will admit that. Our marriage is probably better since I joined Masonry.”

Wyatt delivers his truth about Freemasonry through comedy, by jumping on TikTok fads and adding a Masonic twist to them. “Listen, I’m not a good-looking woman who can do all the dance trends,” he says. “But if I see a dance or a trend that’s going to make people laugh, and intertwine it with Freemasonry, then you better believe I’m going to do it.”

He’s also used TikTok Lives to fundraise in the name of the Freemasons, bringing in thousands of dollars to help charities or brothers in need. “It’s a special thing to see it when we get on Live and do that stuff because that’s the most honest Freemasonry you can get right there,” Wyatt adds. “It takes the whole Illuminati thing out of the equation.”

Wyatt frequently tackles misinformation about the “good ol’ boys club” of Masonry, which some charge protects its members from criminal investigations or prosecutions — a conspiracy so widespread that Masonic TikTokers have even posted jokes about it. “Back in the day, they probably had a little bit of that. But you have that in every organization — it’s not just a Freemason thing, it’s college fraternities too,” he says.

Today, according to Wyatt, things have changed dramatically for Masons. “I have to hold myself to a higher standard of community than I would as a non-Mason, because we’re always shining that light,” he continues. (According to Wyatt, in Masonry, “shining the light” means honoring God through one’s actions, by being moral and good to others.) “If I got pulled over, I would expect a harsher ticket from a brother. And I believe that all judges feel the same way about that issue.”

Mattis, meanwhile, has been battling accusations that Freemasonry is sexist for excluding women. “Part of why myself and others are so resistant to the idea of involving women is that this is our space to not be around women for two hours a month. You can’t have the same openness about certain things when women are around, because I’d be afraid that they would view me differently, whether that’s true or not,” he says.

Mattis tells Input that there are many ways women can participate, like joining the Order of the Eastern Star and other Freemason-adjacent groups that accept female members. “If you went into the Freemasons as a woman,” says Mattis, “men are probably just going to go start some other club.” McKenzie has also discussed the gender issue in his videos.

Ultimately, TikTok Freemasons stand steadfastly behind their organization of choice — and think their videos are changing things for the better. “There’s always going to be the negative person. The troll. The hater. But I honestly think we’ve overcome it now,” says McKenzie. “If you went on TikTok a year ago and you typed in Freemasonry, you would find nothing but conspiracy theories.

“But now, you’ll find this fuzzy face and a whole bunch of other brothers that are ready and willing to give you light, truth, and knowledge,” says the impressively bearded McKenzie. “It’s brought so many to Masonry, and I think that it’s going to help us grow.”