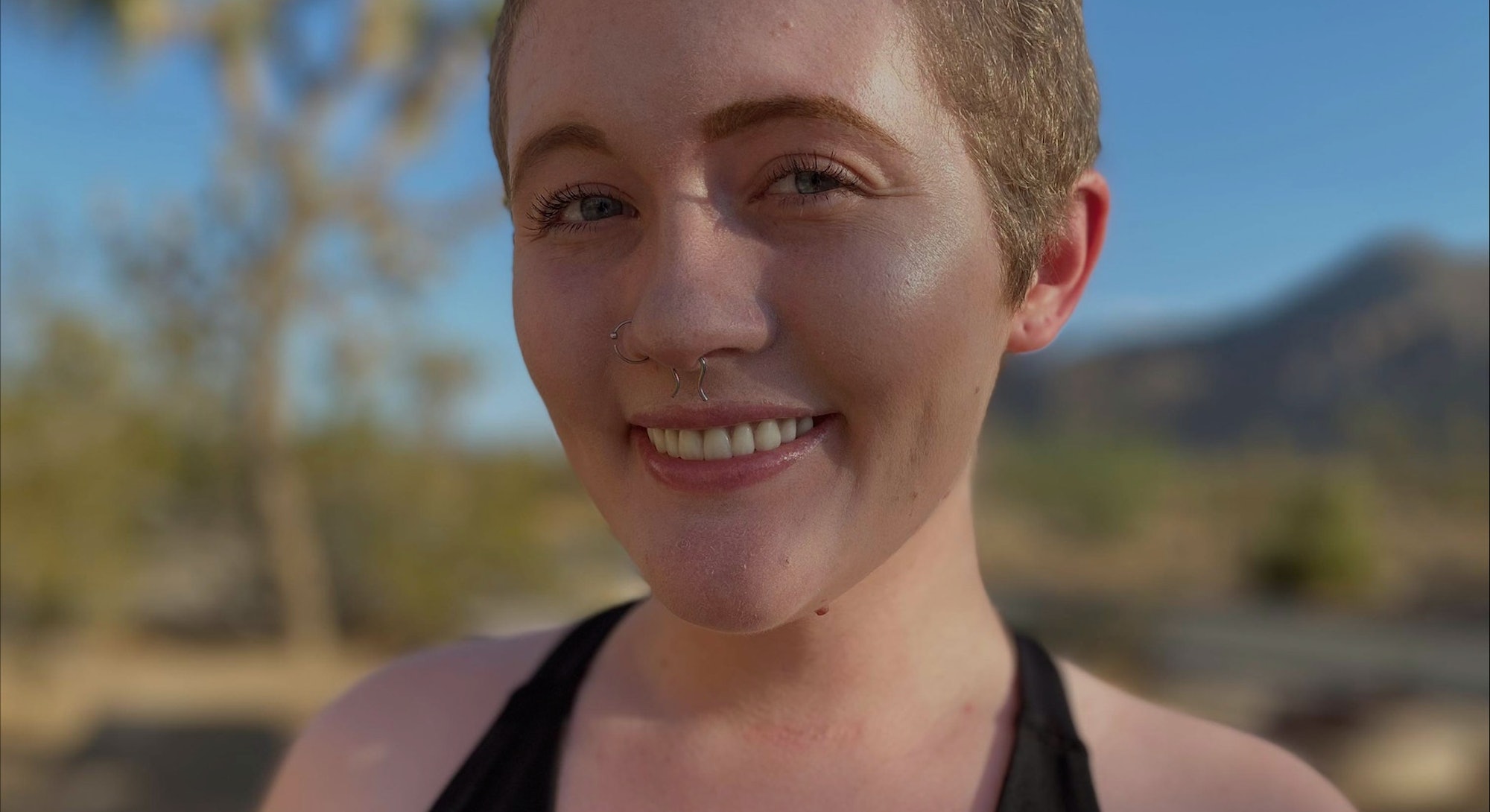 For as long as Faith Hill can remember, she’s had problems with her teeth.

She grew up with deteriorating gum disease — something that her father and maternal grandmother had both struggled with — which caused her gum line to recede and made her teeth weak. It was a manageable condition, but when Hill became addicted to methamphetamine in 2014, at age 15, her teeth really suffered.

She wasn’t taking good care of herself, plus her meth-induced dry mouth “really just ate away at my teeth,” says Hill, now 23 and living in Missouri, where she splits her time between creating content and running deliveries through Amazon Flex. (And to answer your question: No, she is not named after the country singer.)

“I went for a couple of dentist appointments, but I was very high at all of them,” she says. “They warned me that I was going to lose my teeth. As soon as I realized they knew I was high, I never went back, because I was so embarrassed.”

Hill entered rehab in 2019, and by that time, all hope for her teeth had been lost. She was told she had to have them all removed. “I was very sad. I was depressed, crying to my mom about the uncertainty,” says Hill, who has now been sober for more than two years. “I didn't know if [the dentures] were gonna feel like me. I didn’t know if I was gonna be able to talk.”

It was around then that Hill discovered TikTok via her younger sister. She began uploading video montages of her denture fitting process in order to process her grief about getting fake teeth.

Hill is one of many creators from the world of DentureTok, a niche dominated by young women who have been fitted with removable teeth. (The hashtag #dentures has attracted more than one billion views on TikTok.) Although creators in the space face frustration, abuse, and even creepy fetishists, they’re determined to keep posting in an effort to fight the stigma attached to losing one’s teeth.

For Alyssa Segrist, a 22-year-old TikToker and DoorDash delivery person who lives in California with her two-year-old son and husband, trips to the dentist had always been horrifying. She was born with weak enamels and had her first dental surgery at four. By the time she was in her late teens, she was sick of all the pain — and she’d maxed out her insurance.

“They said I had to either pay $8,000 out of pocket to get my teeth fixed or pay $800 for some dentures, because my insurance would pay one more time to have my teeth removed,” recalls Segrist, who now has more than 360,000 followers on her TikTok account, @sparklemouth. “I figured it would help my mental and physical health if I did it.”

The impact on her life was enormous. Previously, Segrist had been scared to eat for fear of damaging her teeth — and she hated the way she looked when she smiled. She decided to post on TikTok to show others that dentures weren’t a bad thing. “Hundreds of thousands of people in this world are young and struggle with dentures,” she says. “I wanted to create a safe space where people who found me could relate.

“I also wanted to fight the stigma around it,” she continues. “There’s so many ways you can lose your teeth. People always make assumptions.”

Jessica Thurlow, a 40-year-old mother of four and crystal seller from Maine, also decided to launch her TikTok to help those who, like her, were losing their teeth. Thurlow was punched in the face by a man at a bar when she was 26, which fractured her jaw in several places; the injuries worsened over time due to fluctuating hormones from her four pregnancies.

On TikTok, where her @thequeenofcorn account has more than 320,000 followers, she’s been transparent about the experience of getting dentures. “I shared the good, the bad, and the ugly — from financing to the crappy food I had to eat for the six weeks my teeth wouldn’t fit,” she says.

Thurlow, who put off dental care throughout her twenties and thirties due to a lack of financial resources, was horrified to hear about how many of her followers had also foregone proper treatment due to poor cash flow. Many who had received care were treated shabbily by corporate chains. “These companies don’t really care about the majority of their patients,” she says. “People are coming to me saying they were left with dentures that don’t fit, and they’re too afraid to go back and get more work done.”

Thurlow now makes videos in which she encourages people to game the system by seeking out free scans and consultations from various corporate entities in order to piece together the dental care they need on a budget.

“My dream is to travel with a mobile dentist team, finding people and bringing them to a group of dentists that will help,” she says. “What we’re doing right now for people’s dental health as a country is not good enough. It makes me mad.”

DentureTok creators say the most rewarding part of being on the platform is feeling like they’ve assisted others.

Although Hill admits that a large chunk of her followers are kids who seem fascinated by her ability to remove her teeth, she’s also helped a fair amount of adults. “People say I’ve helped them through their denture journey. They say I’ve boosted their confidence and helped them feel better about themselves,” she says. “Hearing that is crazy to me.”

Segrist has also been eager to help her followers, many of whom are preparing to have their own teeth removed. “I get a lot of comments from people asking for advice on the adhesives I use, and on whether or not they should get dentures. I think they just need someone to be there for them,” she says. “I try and comment back to everyone because my followers mean so much to me.”

“I have [fetishists] in my inbox asking if they can buy my teeth for a couple hundred bucks. It’s like, ‘No! No, I will not mail them out to you! Gross!’”

Although Hill has noticed a few negative comments trickling in, she says her followers often jump to her defense when trolls get mean. She’s also the object of unwanted sexual attention. One of her earliest videos — in which she obliged a follower who asked her to remove her dentures and smile — was viewed almost 30 million times. “I did whatever I got asked because I thought people were being genuinely curious,” she says. “I didn’t know that I was falling victim to a fetish!”

Hill doesn’t entertain such requests anymore, but she still gets regular messages from fetishists. “I have people in my inbox asking if they can buy my teeth for a couple hundred bucks. It’s like, ‘No! No, I will not mail them out to you! Gross!’ Plus, I just got these!” she says. They never offer her enough money, anyway. “If somebody had been talking $10,000, I might have done it, because I’d make a profit.”

Thurlow has not been as lucky when it comes to hate from users who compare her to Dobby, the house elf from Harry Potter, or Smeagol, the toothless hobbit from Lord of The Rings. “I was like the clapback queen at one point,” she says. “People would say very rude things to me, and I’d stand up for myself — but then I’d be slapped with a community violation.”

Although they recognize that fetish content could be a lucrative option, for now, the women of DentureTok have much bigger — and more rewarding — plans. “It’d be great to find some secret investors who would hear my story and believe in me enough to help me raise money or start a foundation to help people,” says Thurlow, who has made a total of $1,400 from her TikTok so far, through the Creator Fund and TikTok Lives. “There's just too many people that need help.”

Hill — who says her TikTok isn’t a stable source of income, even with her mammoth following — hopes that by building her brand, she will make enough cash to help others, too. “I want to help people get their smiles back,” she says. “But my biggest goal is to make people feel beautiful about who they are, outside of just having dentures. I want people to embrace their true beauty and feel good doing it.”