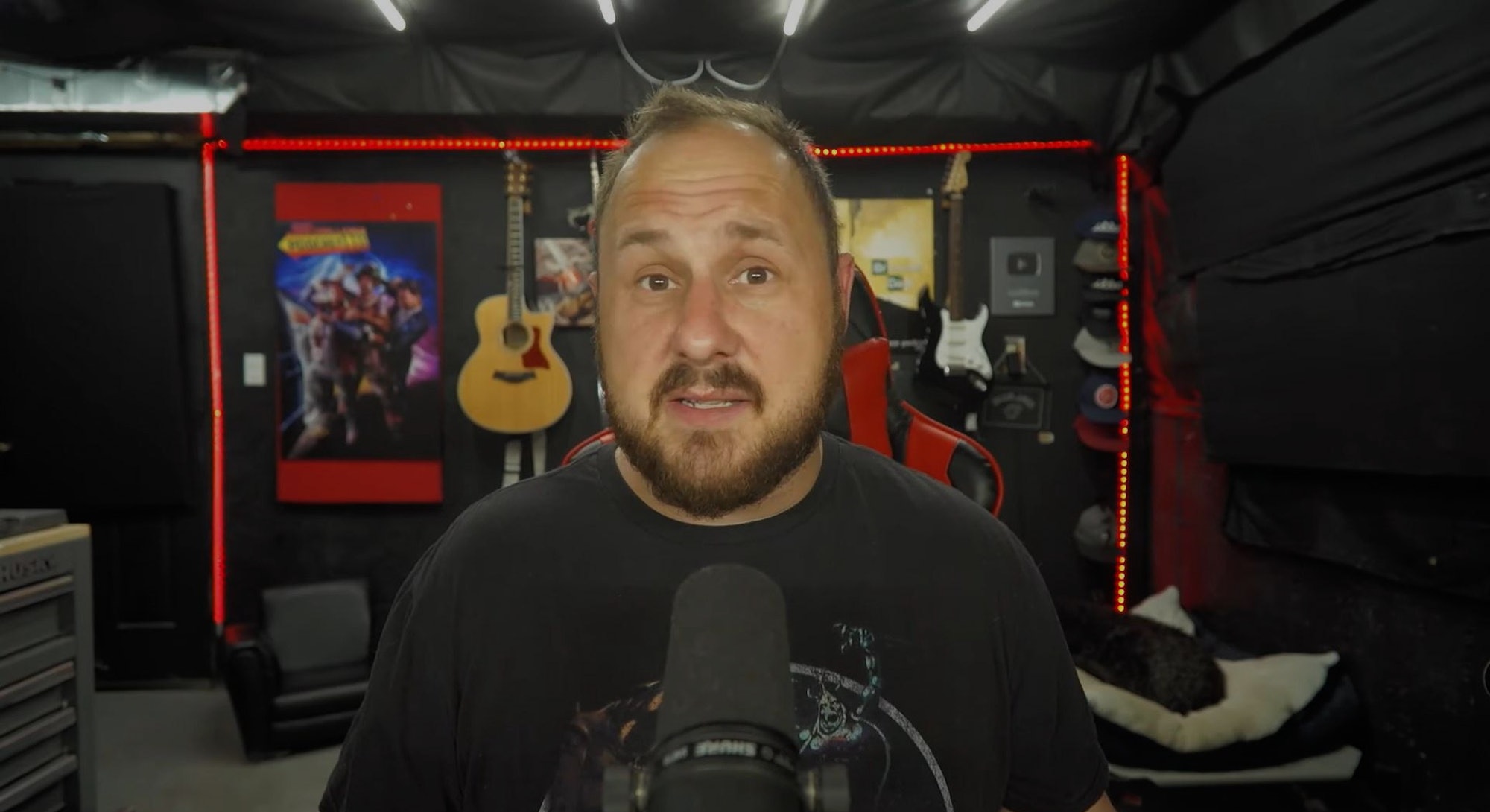 She’d been observing the world of family influencers since 2013, when she’d started to vlog about her experiences as a teen mother. (She had her first child at the age of 18.) Although she gave up her YouTube career to focus on the real world for three years, she had never really stopped watching others in the community. It seemed that Barbour had been watching too, and they shared many of the same views.

“My initial impression was that he had great intentions,” says Sharon, 27, whose two children are now ages three and eight. Sharon, who is from California, returned to YouTube in 2020, posting about ethical issues in the mommy vlogging sphere on her channel, SincerelySharon, which has more than 5,000 subscribers. (Input is withholding the last names of most interviewees in this article for their privacy.) “He was drawing the light to a very important conversation that needed to be had,” she says.

Barbour — who is known for his four-year-old YouTube channel The Dad Challenge Podcast, which now has nearly 120,000 subscribers — seemed to be a staunch advocate for the protection of child social-media stars.

A parent based in Ontario, Canada, Barbour spoke about the importance of asking kids for consent when filming them and called out mommy vloggers for problematic behavior, like referring to their children as their employees or shaming other women over their approach to motherhood.

He even examined analytics to shine a light on exactly who was watching family vloggers — namely, a sizable cohort of middle-aged men — and why that could be, in his opinion, dangerous.

Sharon could never have guessed that she’d become one of Barbour’s biggest critics. But this was before the alleged bullying began.

Sharon is one of a number of concerned mommy vlogger commentators who have spoken out about Barbour. He stands accused of harassing and bullying mommy influencers, spreading misogynistic viewpoints, and weaponizing his followers against critics.

Barbour’s tactics have sparked outrage and concern among the mommy vlogger commentary community, which has produced hundreds of videos about the controversial influencer. His critics are worried that, if left unchecked, he could bring real-world harm to the people he targets.

Although many believe that Barbour’s channel started out with good intentions, his focus changed over time. Around a year ago, his content shifted to covering parenting-influencer scandals — like the one surrounding mommy vlogger Myka Stauffer’s failed adoption, which ended with the influencer “returning” her adopted child, Huxley. She said she was unable to provide proper support for his complex needs.

While many commentators on the mommy vlogging world spoke out about the Stauffer scandal, they were horrified by what they saw as Barbour’s excessive response. At first, he went after the Stauffers. In one video, which remains on his channel today, Barbour threatens to picket the Stauffer’s house in response to Huxley’s rehoming, asks for help paying for a private investigator to track down and “look into” Huxley’s new family, and repeatedly tells fans it’s time to plan action and “go to the next level.” (Myka Stauffer did not respond to Input’s interview request.)

He did take things to the next level, his critics allege. “He found [Huxley’s] new family on Instagram, even though they're not like influencers or anything,” says Apoc, a 32-year-old mommy vlogging commentator and entrepreneur from Oregon with more than 7,000 subscribers on his YouTube channel. “Then he said that if she doesn't take Huxley offline, it’s going to be a problem.”

In a since-deleted YouTube video that has been preserved by another YouTuber, Barbour ranted about how the family should stop posting Huxley’s images to their private Instagram account. He claimed that he’d made this request of Huxley’s new parents so many times that they had to block him.

It’s not the only time Barbour has gone over the line in the eyes of his fellow commentators. He’s also targeted influencer Brianna K, a mommy vlogger with 426,000 YouTube followers whose lavish lifestyle he often mocks in his videos.

“If you’re constantly doing the behavior that you apologize for, it’s no good. You’re not learning or making a change.”

“He made a video where he pulled up Brianna’s new home on Google Maps, and he was showing the street address and naming major landmarks,” Sharon says. “With all that information, someone could easily go out and find her home. I tried it myself, and I found her home in minutes.” (Brianna K did not respond to a request for comment.)

Although the video in question has since been deleted, the apology Barbour issued for it — in which he told his detractors to “kiss my ass” — is still available on his channel.

Sharon doesn’t buy the creator’s half-hearted apologies. “He continues to do this, justifies it by saying he apologized, and then it happens again,” she says. “If you’re constantly doing the behavior that you apologize for, it’s no good. You’re not learning or making a change.”

While Barbour’s videos have upset many, his critics are more concerned about his efforts to take things offscreen. Notably, he has targeted Danielle Cohn, a young TikTok influencer who attracted significant controversy for releasing sexualized content on the platform in 2016, when she was a minor. (Cohn tells Input she is now 18, though her age is widely debated online.)

According to critics, Barbour made it his mission to have Cohn removed from her mother’s care. “He made a video stating that CPS [Child Protective Services] was called a hundred times, and was telling his followers to keep doing it, to keep calling,” says Marissa, a stay-at-home mom of four who uses YouTube to advocate for moms on the internet through her YouTube channel, NotAnotherHousewife, which has more than 4,000 subscribers.

Marissa points Input to a video that Barbour posted to YouTube last year — when Cohn was widely assumed to be 15 years old — in which he admits to circulating revealing pictures of the influencer online in order to make fun of her chest tattoos, and later encouraged his followers to call CPS on Cohn to have her removed from her mother’s care.

In an interview with Input, Cohn says Barbour’s actions have worsened her struggles with anxiety. “I have to deal with cops all the time, and Child Protective Services, because they think that I’m in an abusive home when I’m not,” says Cohn, who has amassed over 20 million followers across her TikTok and YouTube accounts. “It’s really hard to sit there and get interrogated at such a young age. It was traumatizing for me.

“It’s also really messed up because there’s kids that really do need Child Protective Services,” she continues. “They're taking away time from those kids to come and see a girl who’s perfectly fine.”

Mostly, Cohn wants people to know that influencers like Barbour aren’t ethical vigilantes, despite their best efforts to appear that way. “I feel like people kind of praise them and make them look like they're heroes — but in reality, they’re not,” she says. “They’re saying lies about me so they can get their views up. Then I have to deal with all these people harassing me and hating on me.”

Critics of Barbour charge that he seems motivated by more than a desire to save the minors of YouTube. “He’ll frequently talk about women’s hair color, their teeth, their body parts. He’ll call them horrible mothers and say they don’t care about their children,” Marissa says. “It’s pretty clear he hates single moms. He’s actually spoken on his channel before about his trauma from having a single mother — so I think he projects that.”

In one video, Barbour acknowledged his controversial attitudes toward women, but said he has improved because he “no longer says the T-W-A-T word” when speaking about mommy vloggers. However, in the same clip, he defended his choice to regularly criticize women’s appearances.

Marissa charges that Barbour’s followers “just hate moms on the internet.” She adds, “They just feel really bitter about them making money, living their best lives.”

Some of Barbour’s fans — who surprisingly, are predominantly female — beg to differ. “Josh is very strong in his opinions, and some people may find that extreme — others will say it’s passionate,” says 46-year-old Canadian fan Renee, who tells Input that she’s reported a “couple of incidents” to CPS, actions she claims were not influenced by the YouTube host. “I believe he has good intentions and is, at heart, someone who wants to make a positive difference,” she says.

Other fans have more mixed views. “Calling CPS on people you don’t know in real life is not something I agree with,” says 22-year-old Barbour follower and graduate student Kennedy, who lives in West Virginia. Although Kennedy characterizes some of Barbour’s methods as extreme, and actively avoids his “snark videos,” she ultimately views him as a force for good. “Whether you like his methods or not, Josh is making noise, and people are paying attention,” she says.

“The bigger he gets, the more dangerous he will get.”

Although Barbour is happy to make noise and speak freely on his channel each week, he did not want to talk to Input about the allegations surrounding his behavior. “Joshua is not interested in answering any of your questions,” says a press person for Barbour. “Have a nice day!”

Some worry that Barbour’s repeated disregard for his detractors and his refusal to sincerely address criticism could create problems further down the line. “The bigger he gets, the more dangerous he will get,” Apoc warns. “His community is nothing but sheep, and we don’t know if there are crazy people in that group. They all need to be held accountable because they’re getting out of control. Something bad is going to happen.”

Sharon echoes those sentiments. “He’s just festering hate — and it’s scary,” she says. “I’m scared to see where it goes, to be honest with you.”