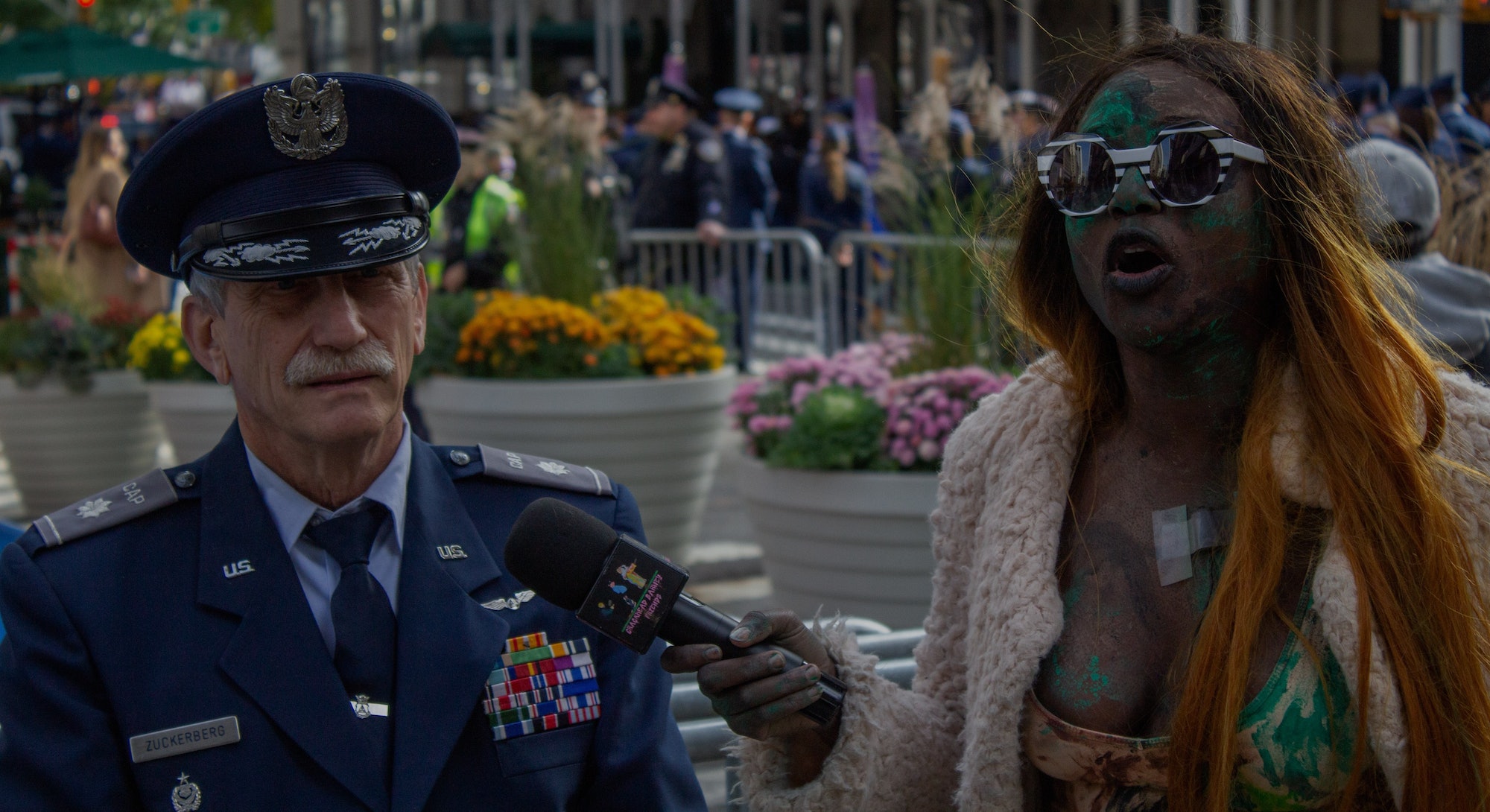 A little before noon on a brisk, sunny day, Crackhead Barney arrives in the Flatiron District of Manhattan, wearing a DIY-camo leotard and green and brown paint smeared across her skin.

She is here for the New York City Veterans Day Parade. In her drawstring bag, she carries a latex Trump mask, a noose, and the decapitated head of a Black baby doll. Barney, who is Black, will only end up using one of these items.

“I’m a G.I. Joe!” she exclaims before bending down and mooning her cameraman, Drew Rosenthal, a 32-year-old in a gray leopard-print jacket. “Is my ass covered?” she asks. It is — with black duct tape.

Barney and Rosenthal are the duo behind the viral interview show Crackhead Barney and Friends, which can be seen on TikTok, Instagram, and YouTube. (Barney’s biggest audience is on TikTok, where she has more than 200,000 followers.)

Her interview technique is, as you might guess, not subtle. She likes to ambush her subjects at public events like parades and protests and tends to piss a lot of people off. (She was once arrested for mooning a crowd of protesters at an anti-vaccine rally in Brooklyn.)

Her biggest claim to fame is her June interview with Andrew Giuliani — a New York gubernatorial candidate whose main qualification is being Rudy Giuliani’s son — which devolved into a shouting match.

Barney has interviewed the QAnon Shaman (she tells me wants to pay him a conjugal visit in prison), run after New York’s next mayor, Eric Adams, to find out “how much Black pussy” he gets, and asked Azealia Banks whether she’s transphobic. Once she encouraged children at a Brooklyn neighborhood gathering hosted by the New York Police Department to chant “Abolish the police!”

Crackhead Barney — whose stage name comes from a performance in which she dressed up as a one-eyed version of Barney the dinosaur and harassed passersby on the street — declines to give me her real name, saying she doesn’t want to get doxxed. As for her age? “I’m six,” she says. “Tell them I’m six.”

Back at the parade, Rosenthal attaches a wireless microphone to Barney and reminds her that it’s illegal to show one’s genitals in New York. “My genitals aren’t illegal in NYC!” she retorts.

The pair weave through the crowd, seeking out anyone willing to talk. Unfortunately, many soldiers refuse to speak with her. Some tell her off. “Why the fuck y’all ignoring me? Give me some life. Give me some energy,” she says.

Eventually, Barney and Rosenthal find a group of cadets from the Massachusetts Maritime Academy waiting to join the parade. They are all young men, some still pimply, outfitted in white sailors’ caps and black uniforms. “Can we get a picture?” John Murphy, a 21-year-old cadet, asks Barney.

She obliges and then asks Murphy what he thinks about “people taking a knee to the flag” during the National Anthem. “Alright, I’m not going to answer any more questions,” he says. “I’m sorry.” One by one, his fellow cadets also demur.

Then a man dressed in loose orange clothing walks by. “What do you think about a knee to the flag?” Barney asks him.

“Hare Krishna,” he replies. (He’s clearly a member of the religious group.)

Barney erupts in laughter. “Finally!” she says. “That was good.”

Moments like these, where politics collide with the absurd, are part and parcel of Crackhead Barney’s act.

She has performed in public for years, often on the city’s subways. However, when the pandemic swept through New York and the subways largely cleared out, Barney lost her captive audience. So come spring 2020, after the murder of George Floyd, she went to the only place where people were gathering in large numbers: the protests.

Rosenthal — who previously made videos for the rapper Paperboy Love Prince, a recent mayoral candidate — first saw Barney during a demonstration in Brooklyn. She was wearing a Donald Trump mask, crawling through the legs of police officers, and causing general mayhem on the streets. He nagged her to collaborate until she decided to do Crackhead Barney and Friends.

The series, inspired by comedian Eric Andre and the popular interview show All Gas No Brakes, took off from there. In the beginning, it also included an anonymous performer named NY Pig, who dressed in a police uniform and latex pig mask. Now, the show focuses on Barney. Her recent rise, she says, is “intertwined” with last year’s protests.

Barney and Rosenthal walk along the parade’s route on Fifth Avenue, hunting for more interviewees. Suddenly, she sees an old friend. “Oh! Little N----r!” she calls out.

Nearby is Deputy Inspector Elias Nikas, a white police officer who made a retaliatory arrest during the Black Lives Matter protests last year, according to New York’s Civilian Complaint Review Board. (“Little N----r” is a crude play on Nikas’ last name. Barney says she uses the N-word with a hard R because “it’s a flipback to reverse oppression.”)

“Let me in the parade with Little N----r!” she demands from behind a barricade. Nikas turns around and strolls towards Barney. “We spoke about that,” he says, disapprovingly, in reference to Barney’s pet name for him.

“Keep going, keep going,” Rosenthal tells Barney, encouraging her to heckle him. “Nikas! Get your little n----r ass over here and talk to me,” she says, sticking her news anchor–style microphone out over the barricade. “Nikas, come look at my outfit!” she shouts. (By this point, she has the Trump mask perched atop her head.) “You’ll probably shoot me! Come look at my outfit! I’m dressed like a G.I. Joe!”

Not everyone is amused. “This is just disrespectful,” says one woman onlooker. Barney turns her attention to other officers surrounding Nikas — Sergeant Joseph Signoreli becomes “Snug,” then “Snug-oreli,” then “Sniggers” — before she and Rosenthal eventually decide to call it quits for the day.

We venture to an outpost of Le Pain Quotidien, a chain of French cafés that pepper the city, to talk more. Neither Barney nor Rosenthal order anything. Despite their increasing popularity, the show has yielded little cash. Their accounts periodically get suspended on social media. At one point, they were part of the TikTok creator fund, an initiative to pay TikTok influencers, but they were kicked out of it, presumably because of the edgy content of their videos.

Rosenthal and Barney make fun of the pretentiously French menu. “I’m at the whitest restaurant ever,” Barney says, filming a post for Instagram. “This is a cra-sant,” purposely mispronouncing croissant, “and cappuccino.” In near unison, she and Rosenthal say, “Coochie-chino!” I order a ham and gruyere sandwich to justify our seats.

As we speak, Barney takes out a tube of Tootsie Rolls from her bag, unwrapping and eating the candies one by one. A pile of wrappers accumulate. She is evasive when it comes to questions about herself, but she does share that she grew up in Queens, the daughter of Nigerian immigrants, and went to Hunter College.

Sensing my difficulty in pinning Barney down, Rosenthal takes over and begins to interview her. The conversation veers towards how Barney, as a Black woman, portrays her race during her performances. “I’m also fitting the Black stereotype: very sexual, loud, boisterous,” she says.

“I feel like you’re trolling people with those stereotypes,” Rosenthal says.

“I’m using it as a weapon,” she responds.

Later, I ask her on the phone what’s next. “Hollywood,” she says without hesitation. And she won’t let anyone — especially the police — get in her way. “Nobody,” she said back at the restaurant, “tells me to stop performing.”