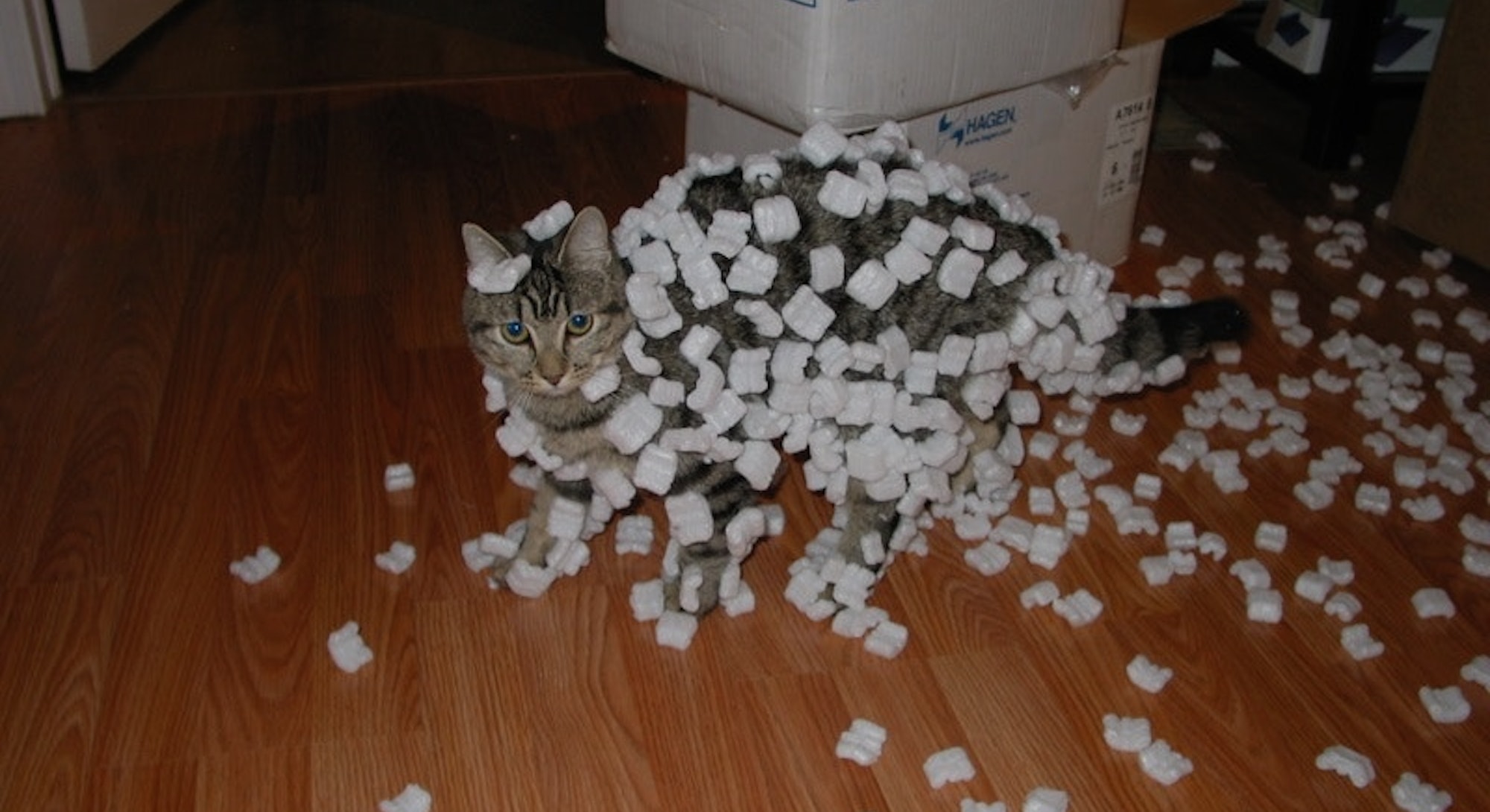 Most lecture slides from my college physics class on electricity and magnetism have long since exited my memory — convoluted diagrams about magnetic fields, bizarro models of waves, squiggly circuit diagrams — but there’s one image that pops into my head unannounced every now and then. It’s a guilt-stricken tabby cat standing next to a box, covered head to toe in packing peanuts.

I remember when the image appeared in front of the lecture hall: after an hour of Coulomb’s Law calculations, the stunned feline was welcome comedic relief — a fellow victim of physics. The photo has graced Reddit before (many times), and Instagram, at least one textbook, and six different English Wikipedia articles (Electric field, Triboelectric effect, Static electricity, Electrostatics, Electrostatic induction, Static cling). The photo tells a story: you see the cat covered in styrofoam with an unbelievably guilty expression and, in the background, you see the boxes that made the situation happen. She’s no Grumpy Cat or Stepan, but as far as iconic cat images go, she’s gotta be in the upper echelons.

I traced the file back to Flickr, where someone named Sean McGrath posted it in 2006. There are a few other Sean McGraths in the world (a football tight end, a philosopher, etc.), but soon I found the Canadian photographer who took the image of the packing peanut cat and got him on a video call.

From his home in St. John, New Brunswick, he told me about the photo’s origins. “It was the height of the cat craze, the ‘i can haz cheezburger’ era, you know, big white bolded text and cat pictures,” he told me. Back in 2006, he was a recent computer science graduate from the University of New Brunswick living with his wife, Carrie, in Fredericton. One day, Carrie’s uncle invited the couple to take a look at a litter of kittens.

“There were all these frisky kittens running around like crazy and then there was Cooper, the runt, sitting in the corner not doing much,” Sean told me. “Right after she was born, she somehow ended up under the bed and almost got lost. My wife’s uncle didn’t even know she was there, and when he finally found her, she was all cold and tiny.” Carrie and Sean were charmed by the timid kitten, took her home, and named her Cooper.

She was named after a memorable raccoon. “As a teenager, I remember going to a friend's house and they had a raccoon named Cooper as a pet. I held it for hours — it was the cutest little animal ever — and I’ve liked that name since,” Sean says.

“Initially, the vet thought she was a boy whose testicles hadn’t descended yet. But the second time we went to the vet, they said she was a she. And at that point, the name, which is sort of masculine, had already stuck,” Sean says.

Cooper was Sean and Carrie’s first cat, and she instantly converted them into cat lovers. “She was a really, really sweet animal,” he says.

In 2006, when Cooper was two or three, Sean ordered fish tank supplies, which came in a few big boxes. Sean consolidated all the packing peanuts in one of them, and Cooper soon found herself swimming in a sea of styrofoam. She hopped out, covered in packing peanuts, and Sean snapped a photo and posted it on Flickr.

That embarrassing moment turned Cooper into the poster child of static electricity.

Sean has already seen people make T-shirts, drawings, and memes. “It’s crazy, as a photographer, because I have all these professional photos out there, but this crazy shot is probably my most popular photo ever,” he told me. Because he gave the photo a creative commons license, he’s never made money from it. “It’s free for anyone to use.” Occasionally, people from around the world will reach out and tell him that they love Cooper.

Cooper’s not the only feline to find out about static electricity the hard way, but she’s got an odd staying power that even eludes Sean and Carrie. “I thought it was funny at the time, but no idea that she’d be in intro physics lectures and official textbooks for decades to come.”

Cooper died in 2016 after a long and happy life full of lots of boxes and packing peanuts. These days, Sean is a senior software engineer and Carrie is a teacher. They have a son, Jack, who shares their love for animals. “He always gets a WWF donation for Christmas,” Sean says. After falling in love with Cooper, they’ve had three cats and ferrets, but Cooper lives on in their hearts. “She was a feisty little one who is greatly missed,” Carrie says.

For all Cooper’s internet glory, she’s hardly the most famous cat in physics (cough cough, Schrödinger). In 1975, physicist Jack H. Heatherton named his cat as a co-author on an oft-cited physics paper titled “Two-, Three-, and Four-Atom Exchange Effects in bcc 3He.” He’d used the words “we” and “our” throughout the paper, and a colleague reportedly recommended changing the pronouns to “me” and “my.” But it was the age of typewriters, and Heatherton decided that instead of re-typing the paper on his typewriter, he’d added his cat, Felix, as co-author. And so a feline under the pseudonym “F.D.C. Willard” became an author on the renowned paper so successful that the feline got job offers.

Perhaps cats — with their righting reflex, exquisite balance, and preternatural ability to display static electricity — are holding onto some undiscovered secrets of the universe.