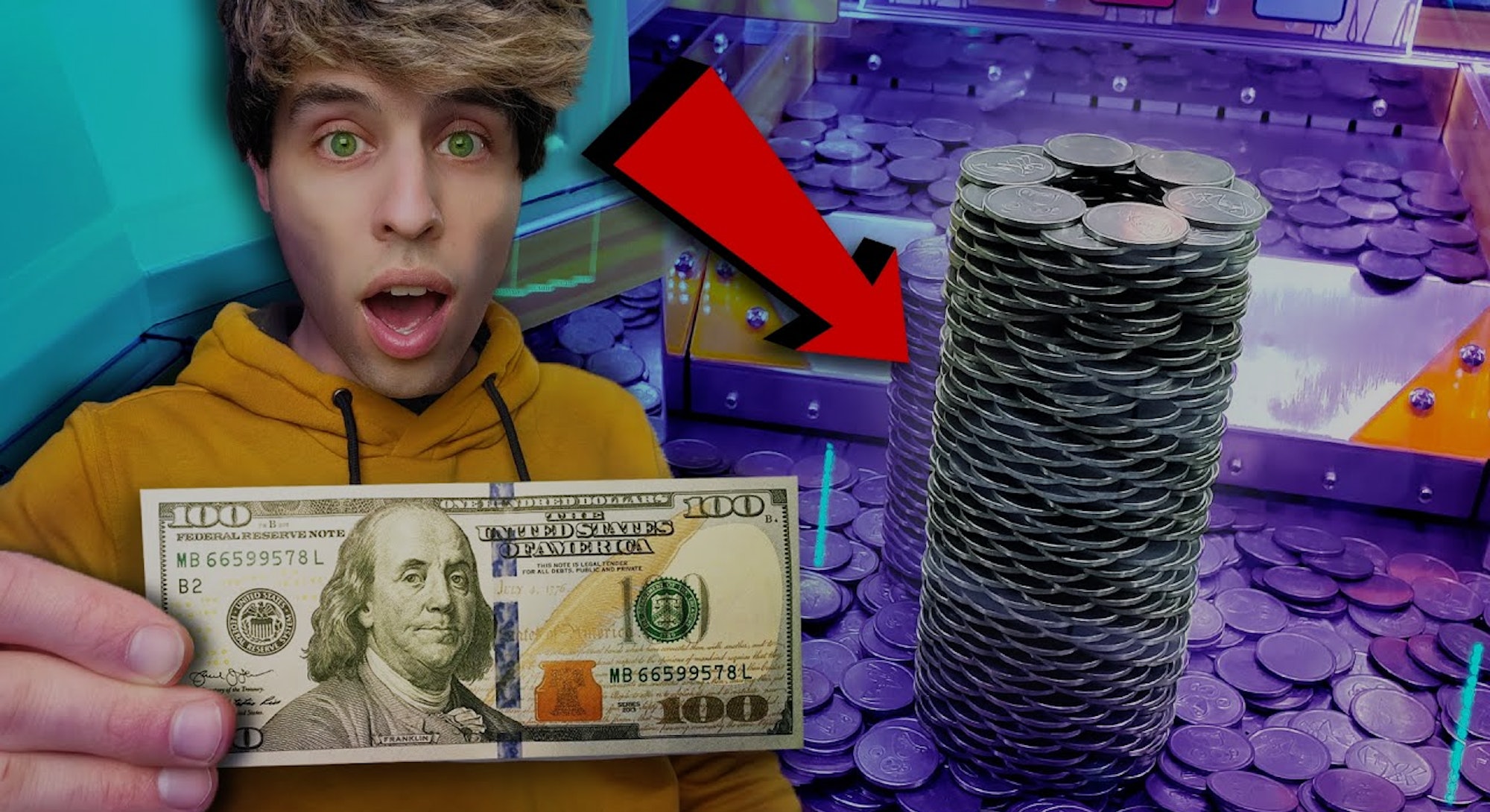 John and Cheri, an Idaho couple who have been married for 22 years, had always been enthusiastic about arcade games and owned several of their own. So, when John was laid off in 2020, Cheri thought of the perfect way to cheer him up.

“I thought, What can I do to make him see that I’m very confident in him?” says Cheri, 56, a ukulele enthusiast and former stay-at-home-mom. (John and Cheri asked Input to withhold their last names for their privacy.) “I decided to do something ridiculous that cost a whole bunch of money. So I bought a coin pusher.”

Coin pushers are amusement games filled with coins and sometimes prizes (including cash). Players drop coins of their own into the machine and onto a platform that constantly moves backward and forward. The aim is to set off a chain reaction that will push coins or prizes off a second, stationary platform and into a payout tray below. Although the machines are legal under federal law, coin pushers that offer cash prizes are outlawed in a number of states.

Owning their own coin pusher, of course, meant John and Cheri had to stock it themselves. And winning their own money over and over again got boring quickly. So in August 2020, the couple decided to launch a YouTube channel to make their new hobby more exciting. That channel — We Play You Win, which has more than 11,000 subscribers — is one of many in YouTube’s coin-pushing niche, which can attract millions of views each week.

Some vloggers in the space tout huge “buy-ins,” the amount one supposedly needs to put in to play high-reward machines, and even bigger wins. For instance, there’s this credulity-straining video, which purportedly shows the creator winning $10.8 million on a $2 million buy-in machine:

John and Cheri’s channel is far more humble and far more believable: They do not claim to be winning big. “We said, ‘No, we’re going to do something different,’” says John, a 40-year-old software engineer who has since found a new job in his field. Instead, they make their live streams interactive, offering small prizes like whoopee cushions to viewers who correctly predict the end results of their games.

The couple also invite their followers to chat in their comment sections and consider their fans to be friends. “It’s a family,” says Cheri. Each month, their community donates to Operation Smile, a charity that provides children with free surgery for cleft palates.

Unfortunately, their wholesome approach has also lost them some followers, who are drawn to the “fantasy” element other channels play up, according to John. “They’re looking for that kind of escape,” he says. “Like, ‘Oh, if only I could find one of these mystery coin pushers out there in the world, I could pay off my mortgage.’”

Cheri says she’s irked when she sees people gravitating toward coin-pusher videos advertising things like a “$500,000 Buy in!” and “TOTAL PROFIT.” “You want to tell them, ‘Look, the emperor has no clothes,” she says. “They’re just scamming you. Don’t go over there!’”

Critics allege that a number of popular coin-pushing vloggers are in fact operating out of their own homes, using their own coin pushers — without revealing the truth to their audiences. These creators will in turn ask their followers to fund their “gambling” by donating to them on YouTube live streams or by joining their Patreons.

“It ruins it for people who are trying to be honest,” says Matt Magnone, a 35-year-old full-time arcade vlogger from Pennsylvania who has three million followers across his YouTube and TikTok channels. “You get these few bad apples who stage things, and then when the rest of us win prizes legitimately, we get questioned for it.”

The coin-pushing vlog space has become very crowded in recent years. “When I first started, I was doing really well,” says Joshua Bartley, a full-time content creator from West Virginia who has 144,000 followers on his six-year-old coin-pushing channel. “There was no competition. So when that switched to 20 channels out there, I kind of bottomed out and leveled off.”

Although he’s still able to support his wife and child through his YouTube income, PayPal donations, and the gaming app affiliate codes he promotes on his channel, he’s not thrilled with the rigged competition. “The channels that do well do two to three times better than me, because they claim to bet big money. I don’t want to conduct myself that way because I care about my audience,” Bartley says. “I think we should be honest.”

Other coin pushers agree that the best kind of content is forthright content. Magnone has noticed people setting up more extreme machines — featuring solid gold bars and other exorbitant prizes that you can’t find IRL — and doesn’t like how it impacts the wider coin-pushing scene. “I upload some videos where I lose, just so my viewers know I have bad days, too,” he says. “It might not get as many views, but it definitely keeps you transparent and real.”

Although the coin-pushing vloggers Input spoke to are reluctant to name names, mostly because they don’t want to get swept up in petty YouTube drama, they say that bad actors are easy to suss out. “The way that you can spot that someone’s fake, other than if they claim to operate in a state where it is clearly illegal, is the noise,” says Cheri. Videos by coin pushers like Dalton’s Garage and A&V Coin Pusher both share strikingly similar background noises, which appear to be a loop of generic casino sounds.

Another sign that something is amiss, says Cheri, is when vloggers don’t show winnings actually coming out of the machine, as is the case with What the Hales, a YouTube family from Ohio that mostly posts coin-pushing content. Coin pushers that offer cash prizes, as opposed to tickets, are illegal in Ohio; the Hales claim their videos are filmed “down South.” Sleuthing redditors found a distinctive Elvis-themed coin pusher, identical to the one used by What the Hales, in an arcade in Sandusky, Ohio; it offers tickets as prizes.

John, meanwhile, isn’t that concerned with allegedly fake videos. The problem, he says, is that creators are asking for financial help to cover their most likely made-up gambling debts. “I’ve seen thousands of dollars [worth of donations] on some streams,” he says, although he refused to cite specific instances. “When you’re asking viewers for money — or implying that you’re risking your money or next month’s rent — that’s when the ethical question comes into play.”

Some members of the coin-pusher community have become so disgruntled by this sort of behavior that they’ve targeted the alleged charlatans. One vlog, made by a coin-pusher named ClawD00d, alleged that What the Hales make fake videos. (What the Hales did not respond to Input’s request for comment.) Bartley – who accepts donations and does not show his winnings leaving the machine on his videos – was in the line of fire, too.

“If you’re just going to watch them talk and knock some stuff down, hey, no harm no foul. But if they’re convincing you to send them money? That’s wrong.”

Bartley insists his videos are completely legit. “People comment saying ‘Why are there no people in the background?’ or ‘Where is the casino noise?’ It makes me laugh. I’m playing in a shopping mall, essentially,” he says. Bartley tells Input he plays in a venue run by a close family friend, who stocks up the coin pusher with cool prizes to appease Bartley’s audience.

Bartley even posted a video in 2019 in which he addressed his detractors, by showing off his surroundings — although one commenter swore he saw a drum kit in the background and alleged that Bartley is operating out of his basement. “The biggest drama over the years has been the creativity of other people’s imaginations. I’ve constantly had to explain myself,” says Bartley. “I am friends with the people who have the coin pusher. I’m not playing at home.”

Cheri and John are firmly on the side of Bartley — they believe his videos are on-the-level. Their main concern is the newcomers. “There’s new ones every month, and 99 percent of them are fake,” says Cheri. “If you’re just going to watch them talk and knock some stuff down, hey, no harm no foul. But if they’re convincing you to send them money? That’s wrong.”

Ultimately, the couple just want people to know that much of what they’re watching isn’t real, so they don’t end up being separated from their money by scammers. “If there were really places where you could play these magical [high-reward] coin pushers, it would be mobbed. There’d be information all over Reddit — but there isn’t any,” says John. “The internet doesn’t keep secrets, you know? It just doesn’t.”