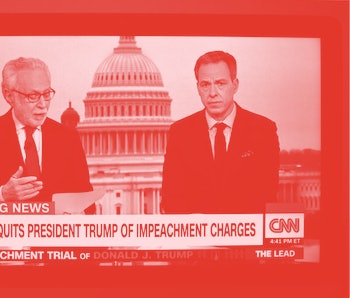 CNN+ is shutting down on April 30, just a month after it launched, according to CNN Business. The news network’s streaming service originally became available on March 29, but apparently didn’t fit into the vision of Discovery, which completed its acquisition of CNN’s parent company, WarnerMedia, earlier this month.

Oh, and one more thing: Closing at the end of April means CNN+ didn’t even survive as long as the now very defunct Quibi.

Shitty situation — Staff were reportedly informed of the decision today by CNN’s new CEO, Chris Licht, and Warner Bros. Discovery’s head of streaming, J.B. Perrette. Some CNN+ shows could survive on a future unified streaming service (maybe as a part of an even more bloated version of HBO Max) but some staff are likely to be laid off.

Licht described the closure as a “uniquely shitty situation,” according to CNN Business.

Ultimately, Discovery was frustrated over the direction of CNN+ and the decision to launch the service even though WarnerMedia and Discovery had yet to merge. Axios reports Discovery higher-ups wanted CNN to return to hard-hitting breaking news and become one component of a larger streaming service. Because of the in-progress acquisition, though, they legally couldn’t share those views.