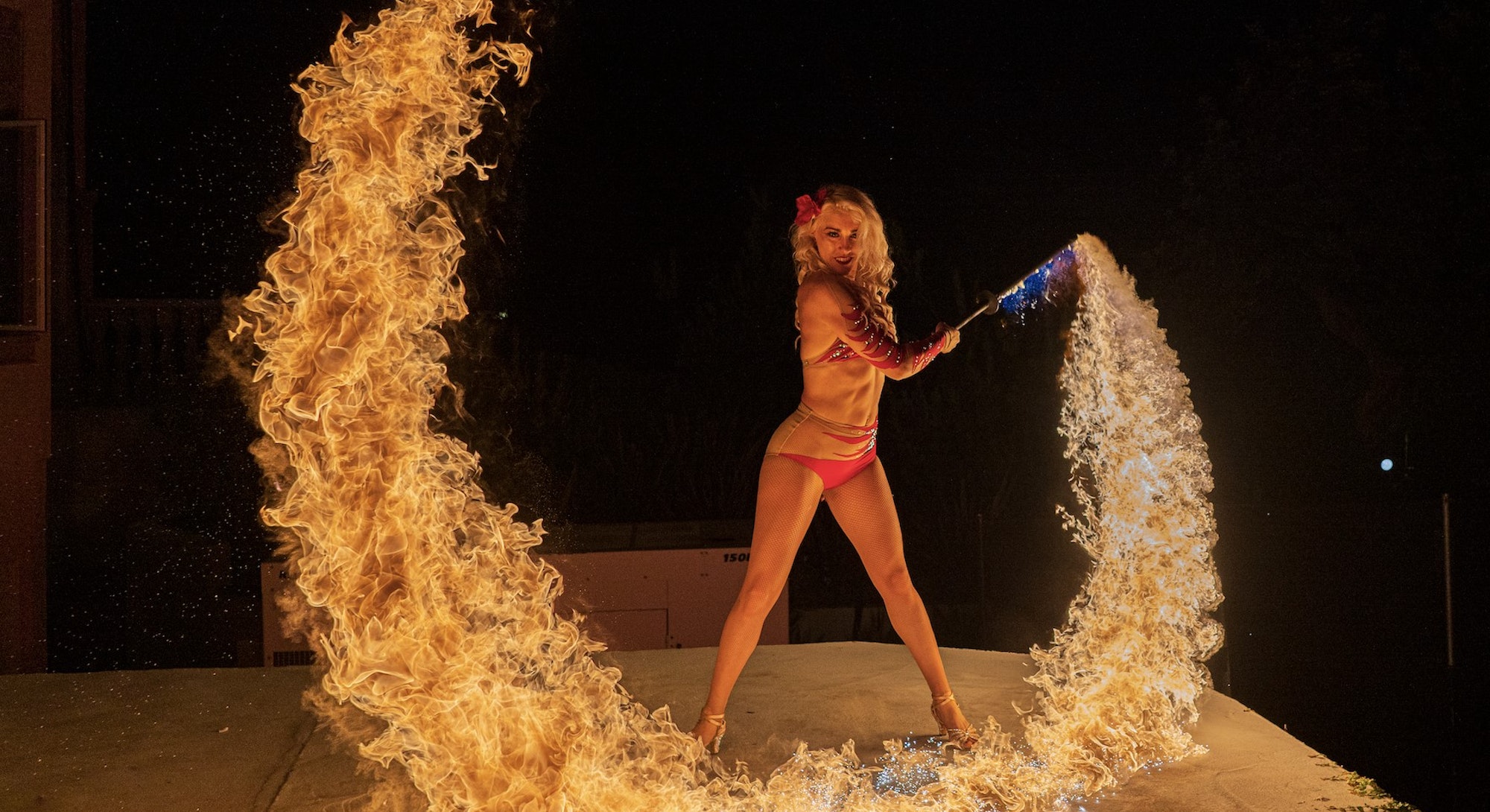 He preferred to live in the moment with his side hustle — a semi-improvised show that involves singing, whip-cracking, and knife-throwing — which he fit around his job as an NPR radio anchor.

But in September of last year, after an audience member posted a clip of Lepiarz that went viral on TikTok, everything changed. The video, which features Lepiarz brandishing a flaming whip, has been viewed almost two million times.

The clip’s success motivated him to join TikTok, where he shares tricks and performances. “It did really well really quickly,” says Lepiarz, who has gained nearly one million TikTok followers on his @jacqueszewhipper account since signing up for the platform in October. He was able to join TikTok’s Creator Fund — which requires influencers have 10,000 followers and 100,000 video views over the last 30 days — in under a week.

While the American circus is in serious decline, performers are thriving on TikTok, where the hashtag #circus has 4.2 billion views. Influencers like Lepiarz, the clown @rafaelgarcez, the acrobat @marcospl11, and the aerialist family @the_mcfive_circus have won over millions of followers. Together, these performers are working to fix the circus’ broken reputation and create a better future for the circus arts.

In the 19th and early 20th century, the circus was the premiere form of American entertainment, and days that the touring shows visited towns and cities were considered akin to a holiday. Over time, the circus slowly became less relevant, with radio, television, and other forms of entertainment taking precedence. By 2017, Ringling Brothers and Barnum & Bailey, America’s largest circus, was forced to close up shop amid dwindling audience numbers and concerns about animal welfare.

Circuses have suffered from an image problem from way back. “The circus had a really bad reputation for a very long time, largely due to the incredibly racist and abusive practices of the early ones,” says Sylphie Curran, a 30-year-old native Californian who posts TikTok videos of herself doing acrobatics while suspended from her hair. “They owned slaves. They treated their animals very badly. People still have this stigma towards circuses because of that.”

Curran, whose @sylphieariella account has more than 43,000 followers, believes circuses also suffered due to rising costs of living. “In my time as a performer, the price of living has at least doubled, but the payment circus artists get has decreased,” says Curran, who learned skills such as hoop artistry at an after-school training program.

She manages to have a circus career in Berlin right now, but says many of her U.S.-based peers work long hours and require side gigs. “It’s just not possible to make a living doing circus,” she says of the situation in the U.S. “There’s just not enough money in the arts.”

Lepiarz, who split his childhood between “normal” school and traveling with the circuses his father performed in as a whip-cracking, knife-throwing, sword-fighting clown, thinks the internet has compounded this issue by putting thousands of performances at everyone’s fingertips.

“I can do a trick that took me a year and a half to learn,” he says. “If I Google that trick, there are kids doing it in their backyard. It’s so easy to see good talent these days.”

When the pandemic hit in 2020, circus artists, unable to perform, were ready to dazzle folks on TikTok. “We had nothing else to do and all of this pent-up creative energy. I was throwing that into videos,” says Grace Good, 28, a self-trained circus artist from Tennessee with 2.7 million followers at @gracegoodcirque.

Her videos include hula hoop performances, fire-eating displays, and complicated airborne tricks. “Reading comments from people who looked forward to my videos and livestreams, it would make me cry,” Good says. “It kept me going.”

Curran, whose video of a hair-hanging rehearsal went viral in November, thinks it’s all down to timing. “People have really missed live entertainment,” she says. Her clip, which has been viewed 13 million times, is a testament to how hungry viewers are for novelty, even after lockdown has ended. “Now that we’ve started to work again, we can show you backstage, which is exciting for people to see,” she adds.

Good believes that TikTok’s own culture, which celebrates the unusual, has helped her to thrive. “People that feel like they’re totally different go online. They see somebody else who definitely is different, and it becomes a space where they can feel a little more accepted,” she says. “Now that we’re accepting and celebrating people’s uniqueness and diversity, a lot more people are into being weird and goofy.”

For Lepiarz — who saw the circus arts revival coming over the last few years as people around him started trying out aerial yoga, hoops, and other such pursuits — the experience has been bittersweet. “Growing up in normal school, being the son of a circus parent, I was not the most popular person. They never let me forget that I was from the circus,” he says. “In 2013, I suddenly noticed that a lot of people were getting into the circus arts. I was like, ‘Where was this six years ago?!’”

He’s seen this interest in the circus arts continue to rise via TikTok. “I’ve had multiple people emailing me to ask where I get my whips from,” he says. “They want to learn the tricks I’m doing.” He tries to help where he can. “Young people reach out to me to ask how to get into the circus without a circus background. I always write back a fairly lengthy response.”

Good is very excited about a possible IRL circus renaissance. As someone who’s worked hard to be a professional circus artist, she hopes her social media fame, and the jobs she’s booked through it, will help make this world more accessible for future performers.

“There’s a lot more opportunities now with TikTok and influencer stuff. That’s like a whole new market,” Good says. “Imagine if being an aerialist was seen as something that you could get a scholarship for in college. Oh, it’d be so cool!”

Lepiarz has humbler hopes for circus TikTok. He sees it as a tool to bring snippets of joy to many more people than he can reach by performing on stage. “I hope that in this era of general not-pleasantness, we can make everyone come together, have a laugh, and be excellent to each other,” he says. “Just for 60 seconds to three minutes, we can all have some fun and maybe not be so terrible.”