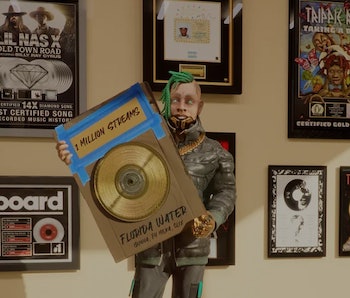 In mid-August, Capitol Records signed FN Meka, a racially ambiguous virtual rapper who pairs terrible music with a litany of digital advertisements. It was reportedly the first major record label to make a deal of this kind, but over the past 48 hours, concerns over Meka’s posting history — namely the use of racial slurs and insensitivity towards issues like police brutality — have led to an internet-wide dunking, culminating in Capital Records severing ties with the project.

As reported by Music Business Worldwide, Meka was “created using thousands of data points compiled from video games and social media,” and has amassed an enormous following. At the time of this writing, the non-tangible artist boasts just over 10 million followers as well as “over a billion views” on TikTok, making him the largest virtual being on the platform. Meka’s only song on streaming platforms at the moment, “Florida Water,” contains a feature from Gunna and has been played over a million times.

The group of real people behind Meka includes Anthony Martini, the former manager of Tyga and Lil Dicky, and Brandon Le, a co-founder of Martini’s virtual record label venture, Factory New. The label focuses specifically on virtual acts, and was technically first to sign Meka prior to the deal with Capital Records.

Rap was just a pivot — A DailyBeast article from April 2021 cites Martini as saying that Meka was originally put into the world by an “anonymous creator... [who made] the character to help sell his popular virtual items.” Martini would go on to describe this person as “a creative genius that comes from the video game world” with a “background is in making digital skins and virtual items” who “created FN Meka almost as a platform for some of these insane items that he was creating.”

The Meka issue goes beyond just being another virtual influencer crafted in the vein of Lil Miquela or Dong Dong while mining the aesthetics of the 2017 to 2018 SoundCloud era. His whole brand appears to be a craven cash grab at the expense of the real communities and experiences magnified in rap music, like the deprivation of economic resources and over-policing.

Meka has brightly colored dreads, a penchant for gaudy, absurd materialism, and raps in brash shouts reminiscent of 6ix9ine (who plead guilty to participating in sexual activities with a 13-year-old in 2015, when was 18 at the time, among other crimes). A particularly damning post from 2019 on the virtual artist’s Instagram page shows the rapper being beaten by a police officer and lamenting life in prison because he “aint no rat” and refuses to snitch, going as far as to say “I wish I could get out so I could start making 🔥 music again.”

FN Meka feels more like the next step in digital blackface, a concept Jason Parham explored deeply in a 2020 Wired piece and which has been mutating through the explosion of social platforms like TikTok.

Is it even AI, really? — The exact use of AI in FN Meka’s music is also unclear. A 2021 piece from Music Business Worldwide notes that while Meka “is voiced by a human,” the “lyrics, chords and tempo underpinning his music is based on AI.” This distinction pokes a hole in the idea that Meka is purely an AI rapper, but instead is a musical act that receives ghostwriting and production assistance from AI technology.

If only interest in NFTs didn’t take a nosedive after 2021, solely so FN Meka wouldn’t have to branch out and people could go on not knowing about him. Good thing this one is in the rearview for now — or at least until the next music industry player builds out another web3 monstrosity.