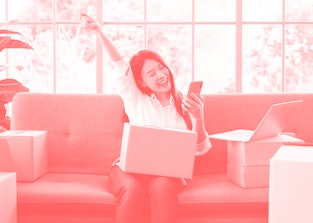 How much Klarna's valuation dropped

The heyday of Buy Now Pay Later (BNPL) startups has passed. A year ago, Swedish BNPL darling Klarna had a startlingly steep valuation of $45.6 billion after the pandemic e-commerce boom — making it Europe’s most valuable tech company. In 2021, it reported that it had 147 million active customers and had handled $80 billion in online sales that year. But earlier this month, the Wall Street Journal reported that its valuation had plummeted. This week, the company confirmed that it’s now valued at just $6.7 billion — an 85 percent decline from 2021.

A crowded space — A gaggle of competitors have entered the BNPL space, which provides frictionless, interest-free installment payment plans for all sorts of everyday purchases — clothes, household items, and even groceries. Most recently, Apple announced during its June WWDC event that it would introduce a Klarna-like BNPL service integrated with Apple Pay: a payment experience that could be even easier and peasier than Klarna’s already easy-peasy checkout options. Other competitors include Afterpay (acquired by Block for $29 billion in January), Paidy (acquired by PayPal for $2.7 billion), Sezzle, Affirm, and more.

As the summer’s economic downturn curbed growth, Klarna laid off 10 percent of its workforce, and Affirm stock is down. Klarna’s still a big fish, but the pond just isn’t as small as it was back in 2005 when it was founded.

A credit card by any other name — In addition to the competition, BNPL has faced scrutiny for guiding vulnerable people into debt. In May, SF Gate reported that 43 percent of Gen Z BNPL users have missed at least one payment. In July 2021, the Consumer Financial Protection Bureau made a specific warning to consumers that BNPL companies “currently lack the consumer protections that apply to credit cards.” And Klarna’s competitor Afterpay has seen federal class-action lawsuits in both California and Maine alleging that the company did not properly convey the fees behind its service, injecting more uncertainty into the shaky BNPL space.

Staying positive — CEO Sebastian Siemiatkowski, who co-founded the company seventeen years ago as part of a Stockholm School of Economics entrepreneurship competition, said in a statement that “Klarna is the only fintech in the world that has been profitable for its first 14 years of existence.” The company announced a new $800 million in funding from both new investors, such as the United Arab Emirates sovereign fund Mubadala Investment Company, and Canada Pension Plan Investment Board, as well as existing investors, such as Sequoia.

Not to be like, “I called it,” but when I saw Klarna’s NYC subway ads showing some woman in garish Victorian dress manically dancing around her house while online shopping from her phone, I had a feeling that BNPL’s meteoric rise would soon slow — we can’t just dance around and spread basic purchases into four installments forever, can we?