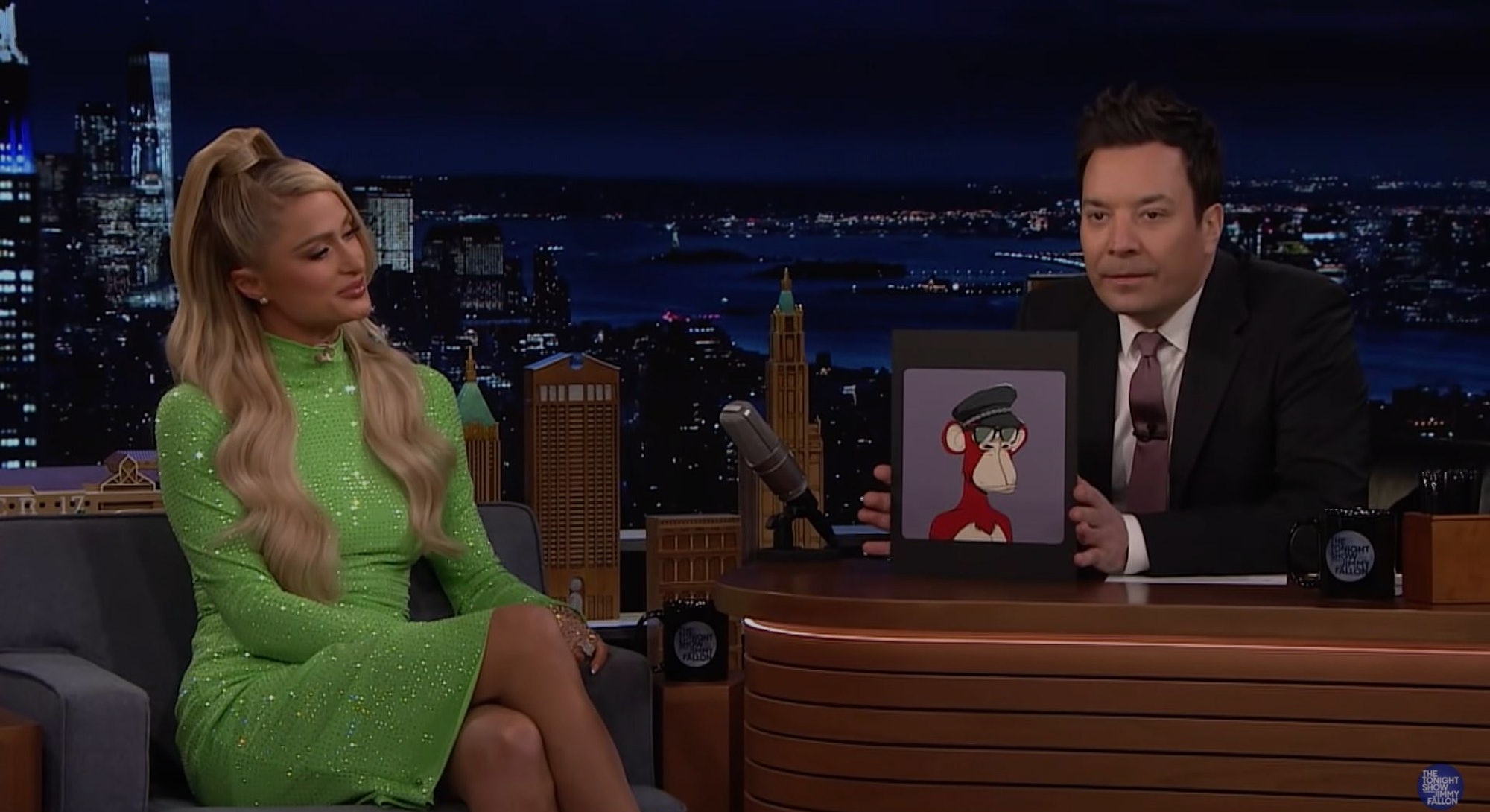 Jawwn, a U.S.-based NFT collector who declines to share his real name for privacy reasons, was relaxing at home a week ago when his phone began buzzing and pinging.

Within seconds, Jawwn’s wife walked into the room and told him to turn on the TV and tune into The Tonight Show Starring Jimmy Fallon. When he did, his “jaw dropped”: There was socialite Paris Hilton showing off a Bored Ape Yacht Club NFT he used to own.

“I was like, ‘No way! No way!’” Jawwn says. “I don't know of any other space that this kind of interaction could have happened. It’s pretty insane.”

The made-for-TV moment is one that has become more common as celebrities start to enter the NFT space and talk publicly about their acquisitions. Days after Hilton and fellow ape owner Fallon exchanged awkward pleasantries about their NFTs on The Tonight Show, Gwyneth Paltrow announced she too had acquired a Bored Ape.

Then, over the weekend, it was reported that Justin Bieber had bought an ape for more than $1.3 million. (However, there are questions as to whether Bieber’s purchase occurred using his own money.) Hilton, Paltrow, and Bieber join a club that already included boldface names like Steph Curry, Kevin Hart, Post Malone, Snoop Dogg, Eminem, and Logan Paul.

The sudden, spectacular arrival of NFTs into the mainstream has echoes of the time Jawwn first dove into the world of non-fungible tokens in August 2021. “That was during a huge bull run,” he explains. “It was really, really exciting. Everybody was hyped up about it. [Marketplace] OpenSea was selling like crazy. I guess I just got redpilled. I dove right in.”

From the get-go, Jawwn coveted the Bored Apes, now the hottest NFT project around. There was one problem: the cost. Jawwn considered buying one, but they ran 20 or 30 ETH at a time when 1 ETH was between $2,000 and $3,000.

Initially, he didn’t get what separated them from any other NFT collection. But it kept niggling at him. “The more I interacted with people in the space, the more I changed my mind,” he says. Jawwn saved up money by minting, then selling other NFTs for profit until November 16 rolled around.

It was close to his birthday, and he decided he wanted to buy an early gift for himself. “I feel like this is going to be the blue chip of all blue chips,” Jawwn says. “It’s a solid investment — I mean, it’s hard to say anything’s a solid investment in the NFT space, but comparatively speaking, right?”

“I was happy to have it,” he recalls. “And then, I was like, ‘You know, that being said… if there’s an opportunity for me to get another one, I’m going to try to take it.’” So he listed his ape on January 17 on OpenSea. At the time, the floor for Bored Apes was around 60 to 65 ETH. He listed it at double that. The reasoning was simple: If it sold for 120 ETH, he’d take that and buy two.

On January 22, he received a notification through OpenSea: His ape had sold for 119 ETH ($287,000), to an account belonging to MoonPay, a U.S.-based fintech company that has been buying up high-profile NFTs then passing them on to celebrities.

“Celebrities’ presence will help raise awareness for the brand overall, but them joining BAYC definitely changes the community.”

Cathal Berragan, an NFT industry watcher and collector, figures MoonPay’s motive boils down to one word: marketing. “The cost of an ape is roughly the same as what they’d have to pay for a branded post from the celebrity,” Berragan says. “They cover the cost of an ape and get a great piece of content that organically mentions their service. The content also receives way more reach than a regular piece of branded content ever would because the Bored Ape community get behind it and promote it. It’s super-smart.”

If celebrities are indeed not paying for these NFTs, Berragan adds, “this is massively disingenuous and against the spirit of Web3. They’ve missed the point entirely and run the risk of taking the brand off in a commercial direction — something the community will have no say in.” Reps for Fallon and Hilton did not respond to requests for comment.

(MoonPay, which did not initially respond to Input’s questions about its arrangements with celebs, countered Berragan’s theory the day after this story was published. “We created MoonPay Concierge as a way to help these artists and creatives reach an even wider audience and enable celebrities to purchase NFTs without any friction,” a spokesperson tells Input. “MoonPay Concierge customers are charged for services rendered.”)

And how do non-famous ape owners feel about all this? “Public figures, just like everyone, are welcome in BAYC,” says Josh Ong, a prominent figure in the Bored Ape world. “Their presence will help raise awareness for the brand overall, but celebrities joining BAYC definitely changes the community.

“We knew in the early days that the magic of the tight-knit community wouldn’t stay forever,” he continues, “but many of us are still working to keep the club values, like supporting each other and staying creative, that made it special.”

Seeing the NFT he once owned appear on TV, brandished by a major celebrity, was an unusual experience for Jawwn. And there was at least one other person who could relate. Alongside the picture of Hilton’s NFT that Fallon placed on his desk, he displayed a picture of his own Bored Ape. That ape was once owned by Jerry, a 31-year-old Chinese citizen.

Jerry — who did not provide his surname, again for privacy reasons — used to be a construction engineer but quit his job in July 2021 when he realized he could make money from the crypto markets. In September 2021, he bought his third Bored Ape — #599, decked out in a striped shirt, boat captain’s hat, and sunglasses — for 33.5 ETH, then worth $115,000.

Jerry listed ape #599 on OpenSea, and sold it to the same user as Jawwn had — moonpay.eth — on November 8 for 46.6 ETH ($225,000). “At that time, of course, I was happy,” Jerry says. “I’d made money.” But when he saw Fallon reveal his Bored Ape on Twitter on November 17, he was shocked. “It’s crazy, right? In real life, that’s never happened to me, to do something with Jimmy Fallon,” he says. “But in the crypto world, it’s an interdimensional story.”

EroDegen, an office worker who got into crypto in early 2018 and minted some of his own NFTs, had a similar experience. He bought Bored Ape #590 in May 2021 for 0.2 ETH, or just short of $590. “When I first bought the ape, I was like, ‘This guy represents everything I love and want to be,’” he explains. It was the “embodiment of myself and my dreams.”

EroDegen thought it would be his “forever ape,” but he never imagined prices would rise. In the end, he sold it to the rapper Timbaland on September 30 for 74.69 ETH — at $224,000, a nearly 379,000 percent markup. (This transfer, as far as public records on OpenSea indicate, didn’t involve MoonPay.) “The sale decision was bittersweet,” he admits. “But it allowed me a greater amount of freedom in my life.”

EroDegen had no idea who he was selling it to until Timbaland revealed his ownership of the ape to the world. “Seeing it end up with Timba was like a silver lining to the sale,” says Erodegen, who had grown up with the rapper’s music and loved his work.

As to whether it’s a good thing for celebrities to own NFTs — and promote their ownership on nationally broadcast TV shows — Jerry is less certain. “It’s a difficult question,” he says. “If ordinary people don’t know this market well, most of them will lose money.”

Jawwn is more sanguine. “The thing is, with this space, there’s going to be a lot more of these stories where people buy something then resell it to a celebrity,” he says. “At some point, I’m sure even the president will be buying a Bored Ape just to flex.”

“It trivializes the technology as a toy for rich people who have run out of things to buy.”

That would be a concern for Berragan. “It’s worrying that this is how millions will discover the NFT space,” he says. “It trivializes the technology as a toy for rich people who have run out of things to buy.”

On the other hand, Evan Branigan, an attorney and NFT collector in Colorado, is bullish on celebs owning Bored Apes. “I think it’s important that celebrities take seriously the responsibility to make sure that people understand how speculative and risky these PFP [profile picture] NFT projects are,” he says. “But I don’t understand hating on celebrities who want to try out these NFT projects and give exposure to NFTs to a broad audience.”

Now that Jawwn has had the time to digest the events of last week, he has a better perspective on things. “There’s this thing about it where you’re happy to sell something but also sad at the same time — it’s a rollercoaster of emotion,” he says. “I’m going to miss [the ape]. And it’s clearly going to be worth more now because a celebrity bought it.”

Jawwn has yet to use the proceeds from his sale to obtain another ape, as he’d planned. The floor is at around 95 ETH ($225,000) and rising. “The time for me to get another one is closing,” he says with a laugh. “But I’ve been shopping. And I’m definitely going to get another ape. I’m just waiting for the right one.”

UPDATE 2/2/22: This story has been updated with comment from MoonPay.