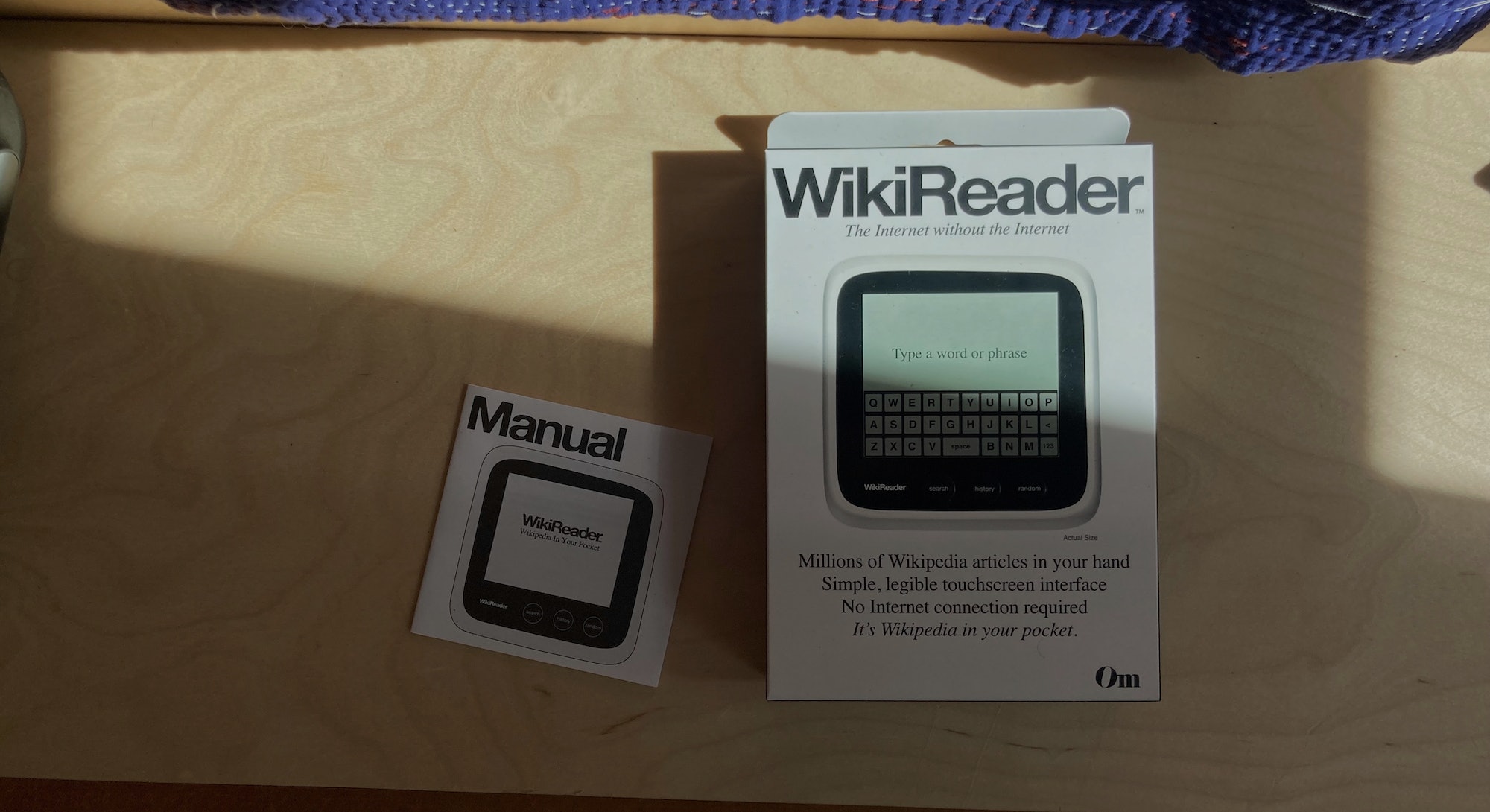 In 2009, the world met the WikiReader, a single-purpose gadget that holds all 6.5 million articles on English Wikipedia, from the depopulation of cockroaches in post-Soviet states to the list of lists of lists.

Perhaps you are stranded on the most remote inhabited archipelago in the world without internet and you want to read about the 18th-century woman who convinced doctors she had given birth to rabbits. Or maybe the list of U.S. state dinosaurs. All you’d need are two AAA batteries and your trusty WikiReader.

The aesthetically unremarkable aughts gizmo measures 4 inches by 4 inches, with a resolution of 240 by 208 pixels. It has an e-ink display with a rather janky touchscreen that’s better fit for a stylus than a finger, and its outer body has only the WikiReader logo and three buttons for search, history, and random. It’s simple. Some might even say it’s perfect. And it’s been off the market since 2014, when parent company OpenMoko pulled the plug on WikiReader operations.

But the device didn’t really die, thanks to a highly-private and tremendously dedicated figure called Jack, who keeps the utility of the decade-old device alive. Jack sells SD cards with updated content for $34, or $29 for a digital download (without the new SD card, your WikiReader’s contents are totally outdated.) Jack initially developed a new SD card for 2015 content, and it took more than a year to get the Ubuntu environment set up and fix the Wikipedia download so it would process for the WikiReader. “It was taking 5-6 days to process the Wikipedia download into a WikiReader database. So each test cycle was a week,” Jack told Input in an email. “It was all very time-consuming.”

He keeps doing annual updates even though he sells “just a few a month.” The 2022 update has been available since July.

“Many buyers are elderly people or 50-somethings buying it for their 80-something fathers,” he said, adding that many avid WikiReader fans “do not use a computer or the internet (think 90-year-olds).” He continues, “You wouldn't think there is a market for this, but there is a small one. I've sold to the Philippines, U.K., and Australia.” He says some of his other buyers who want offline Wikipedia access for trips or airplanes. Other customers have been inmates who live in facilities that allow small electronic devices.

There’s a 189-person-strong WikiReader subreddit, and Jack believes he is the only person in the world who “makes the update and makes one that works and has all the articles (at least the articles that can be viewed on the WikiReader).” His SD cards are sold on eBay, Amazon, and jacksuniversal.com, which is plastered with the fitting tagline: “We specialize in everything WikiReader!”

To WikiReader owner Ryan Michael Moberly, constant Wikipedia access is crucial: “The grid is down, massive rolling blackouts, tornadoes, but I must know about the history of the horseshoe sandwich!” he jokes.

Though the WikiReader was not created by Wikipedia, the Wikimedia Foundation — the nonprofit that maintains Wikipedia — put out a statement condoning the device upon its release in 2009. “Wikipedia content is freely licensed, allowing anyone to copy, modify, and re-use it for any purpose, including commercial uses,” wrote a Wikimedia Foundation representative in a public post. The official WikiReader web page states that “Socrates pondered more important things than bandwidth. So do you.”

gone but not forgotten

WikiReader is like so many of those late-aughts internet gadgets — relegated to dusty shelves or basement storage bins. Take, for instance, the Kin, a social networking device which Microsoft spent a billion dollars developing just for it to be taken off the market after two months due to poor sales. There was also the legendary Twitter Peek, a cyan-blue handheld device made for Twitter alone — which sounds more like a torture device. For a monthly fee of $8, you could get internet access... but just for Twitter.

The Twitter Peek was met with broad criticism (it’s on a slew of “worst product” lists). Not long after its failure to launch, Twitter Peek terminated service in January 2012, abandoning the users who paid $299 for “lifelong service.” Yikes. These days, the Twitter Peek graces the shelves of collectors — and the Museum of Failure. Perhaps one of the reasons that the Twitter Peek failed to pique interest is its horrifying user experience, where you have to click on a tweet to read more than the first few words, defeating the purpose of a site full of bite-sized posts.

But the remarkably still-present WikiReader stays relevant. I bought one on eBay a few months ago and I’ve been pulling it out on the subway when I start wondering something and need to scratch the itch. Unfortunately, I’m hooked. I’m a lost cause. This device has suddenly become indispensable to me. I’m spending less time scrolling Instagram and more time scrolling through the Wikipedia article on mondegreens. The online encyclopedia is great, but the offline encyclopedia is even better sometimes.