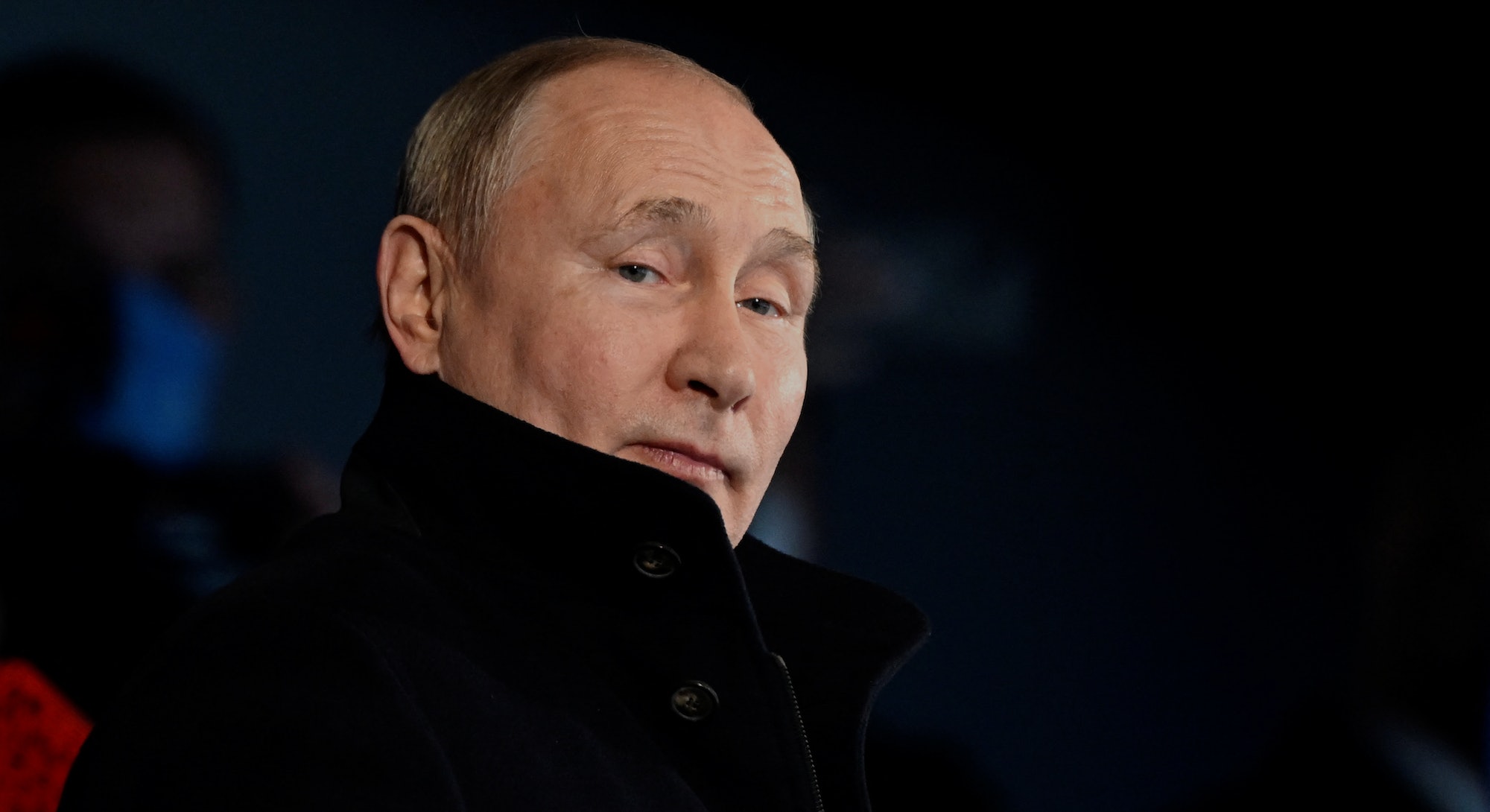 The U.S. today said that Russia appears to have as many as 190,000 troops in and around Ukraine. Fears are running high that Russia will create a “false flag” incident to justify an invasion of the neighboring nation.

And beyond the threat of boots on the ground, there’s the likelihood of a catastrophic clash in cyberspace.

The latter scenario may already be in motion. On Tuesday, cyberattacks knocked offline the websites of Ukraine’s army, defense ministry, and several of its major banks. While Ukraine’s cyberdefense lead official didn’t point the finger explicitly at Russia, there were strong hints contained in the country’s public statement: “It is possible that the aggressor resorted to tactics of petty mischief, because his aggressive plans aren’t working overall.”

It was one of many such attacks against the country. In the first 10 months of 2021, the Ukrainian government estimates that the nation was attacked 288,000 times. Most of those strikes were believed to be by Russia, which has a history of launching destructive cyberattacks against many other countries. In June 2017, an attack took down Ukraine’s transport system and affected radiation-monitoring equipment at the Chernobyl nuclear power plant. Ukraine and the CIA attributed the aggressions to Russia.

The ArchiveTeam collective was born “out of anger and a feeling of powerlessness.”

Which is why, as tensions ratchet up in eastern Europe, cybersecurity experts are pushing people to offer up a portion of their computer’s processing power and broadband connection to run ArchiveTeam Warrior, a virtual archiving app that crawls the web and downloads historical versions of available websites.

In this instance, ArchiveTeam Warrior — which works like the Web 1.0 collaborative research tool SETI@Home, which between May 1999 and March 2020 asked users to donate processing power to analyze radio signals for signs of alien life in outer space — is backing up the entire Ukrainian internet.

ArchiveTeam is a group of archivists and programmers founded in 2009 to preserve websites that are at risk. It was set up by New York archivist Jason Scott, who said in 2012 that the collective was born “out of anger and a feeling of powerlessness, this feeling that we were letting companies decide for us what was going to survive and what was going to die.” (Scott declined to comment for this article.)

Initially, ArchiveTeam focused on saving the rundown neighborhoods of the world wide web that were earmarked for demolition, such as Geocities, Google+, TwitPic, and Friendster. It has since moved on to broader, more challenging projects like the Ukrainian effort. The ArchiveTeam Warrior app downloads at-risk websites then uploads them to the service’s servers, which are hosted by the Internet Archive — an entity that isn’t directly affiliated with ArchiveTeam.

One of the people involved is 22-year-old Johns Hopkins University computer science graduate Simon Liu. From the house in which he lives with his parents, Liu has backed up nearly 270 gigabytes of data across 6.3 million items. He came to ArchiveTeam a couple of years ago, after learning of it on Reddit.

“I thought it was interesting, people coming together to preserve slices of the internet through time,” he tells Input. “As companies shut down large swaths of their product stack, or they get sold or acquired and things shut down, things disappear. It’s really unfortunate because it’s a crucial piece of internet history that, a lot of time, just disappears.”

Liu’s home broadband connection is faster than most, so he’s volunteered on a number of ArchiveTeam’s projects over the years. He doesn’t use the Warrior app itself, instead running the project scripts directly. He runs 30 scripts at a time, each of which are capable of doing 20 jobs simultaneously. “If my family is using the internet a lot and don’t want to impact that, I’ll spin them down,” he says. “At night when no one is using the internet, I’ll run it back up.”

“Backing up the data also ensures that if a site is taken down in a way that’s not recoverable, there will still be a copy of it that will go up later on.”

Scores of volunteers like Liu are sharing their resources to save the Ukrainian internet in case of emergency. “Hats off to them – it sounds like a tremendous undertaking,” says Welton Chang, founder of social media intelligence firm Pyrra Tech and former chief technology officer at Washington, D.C. think tank Human Rights First. “Cyberwar and cybersecurity people have been talking about this for some time — at least since the mid-’90s — [saying] that as reliance on internet infrastructure increased, the more likely these assets would be first targeted in an actual interstate war.”

There are plenty of reasons to try and act now to preserve Ukraine’s internet. Doing so will ensure the integrity of information hosted on Ukrainian websites. “We’ve seen in the past corruption of data and defacement of public-facing sites,” says Chang. “Additionally, backing up the data also ensures that if a site is taken down in a way that's not recoverable, there will still be a copy of it that will go up later on.”

As of noon Eastern Time today, ArchiveTeam Warrior’s Ukrainian project had backed up 2.4Tib, or around 2.6TB of data, comprising 52 million “items” from websites ending in .ua, the Ukrainian top-level domain name. (An item could be a web page, PDF, or other file hosted on a website.) In all, 252 users had downloaded the app and let it borrow their computer resources to preserve websites.

A separate ArchiveTeam project, nicknamed Ukr-net, has downloaded a further 372GB of data. Although the precise volume of data needing to be backed up is constantly shifting, the .ua tracker presently has identified 905.7 million items with an average size of around 49Kb — around 5.5TB.

ArchiveTeam’s app uses a virtual machine — an emulation of a desktop computer siloed within the computer on which it is running — which almost guarantees security from any cyberattacks. Still, there are some risks involved. Were a certain global superpower able to identify those lending their processing power, it could seek revenge on those individuals.

“One could be volunteering to be a target of Russian cyberattack and identifying oneself in cyberspace for future reference as an enemy of Russia,” says strategist Lynette Nusbacher, former senior intelligence advisor and head of the U.K. government’s Strategic Horizons Unit.

“War has always been a threat to culture and knowledge as well as to the libraries and archives that preserve it.”

That doesn’t bother Liu too much. “My philosophy is if a nation state wants to get into your network, they’ll get into your network,” he says. “The best way to protect yourself is to use common sense.” He claims to have a pretty strong firewall, and most of his ports closed on his router — standard infosec practice.

“I’m fairly confident in ArchiveTeam’s scripts not destroying my network,” he says. “There’s some level of initial trust you have to put into this.” He’s more concerned about the people he lives with. “My parents are like: ‘Don’t do sketchy stuff on our network.’ You don’t want to get in trouble.”

Despite the risks of ending up on Vladimir Putin’s shit list, action is necessary, especially as the drumbeat of war continues, and cyberattacks continue to mount against Ukraine’s key infrastructure. Speedy action to save our digital traces is vital, says William Kilbride, executive director of the Digital Preservation Coalition.

“War has always been a threat to culture and knowledge as well as to the libraries and archives that preserve it,” he says. “Ask the National Library of Bosnia, burned to ashes by the Serbian militia in 1992. The digital age is no different.” Kilbride adds that advances in technology in the last 30 years have been both a blessing and a curse: “The attack surfaces have expanded, but so have the evacuation routes.”

For now, the small volunteer army of internet archivists keeping a backup of Ukraine’s internet, should the worst happen, may well suffice. The worry, though, is that it won’t the next time. “Because the Russians think these things through in advance,” says Nusbacher, “laying the ground to shape future operations could involve checkmating schemes like this today in order to achieve an effect tomorrow.”