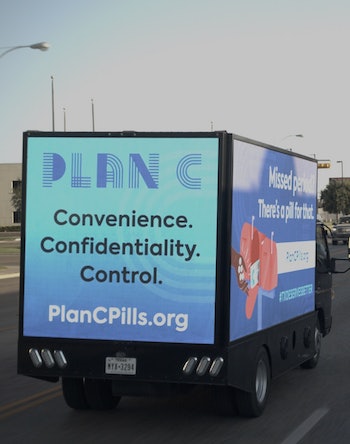 At the end of August, Plan C Pills — a national nonprofit designed to bring awareness to “the modern medical technology of abortion pills” — was finishing up a four-day “road trip to end all road trips” through college campuses in West Texas.

The message “Missed period? There’s a pill for that” appeared in English and Spanish, along with the hashtag #TXDESERVESBETTER, on a digital billboard on the side of the organization’s truck. The trip, which began on Friday, Aug. 27, was taking place under the looming shadow of SB 8, the controversial Texas law that bans abortions at six weeks. (The law came into effect Sept. 1.)

While the truck rolled through Texas, the organization was posting activist art on Instagram and holding what cofounder and co-director Elisa Wells calls a “lively dialog” in the comments. Then, on Saturday, Aug. 28, Plan C Pills’ Instagram account was shut down.

“To have our access cut off for no reason, at a time when restrictive laws were about to come into place, made it really hard to spread the word” about the road trip, says Wells. “In terms of where the conversation is happening, a lot is on Instagram. It’s the social media platform most used by people who are needing abortion.”

The shutdown was staggered: The Plan C Pills account was reinstated on Monday, Aug. 30, shut down again Tuesday and back up on Wednesday. Wells says that Instagram has still not offered any explanations as to why Plan C Pills’ account was shut down during this time period. (“The account @plancpills was mistakenly disabled and has been restored,” an Instagram spokesperson tells Input. However, the platform did not respond to requests to elaborate.) Wells adds that Plan C Pills had been told that some past shutdowns were related to “selling supplements” — something the organization does not do.

Wells tells Input that Plan C Pills also has had censorship problems with Facebook, Google Ads, and other online entities, and similarly has not received an explanation as to why. These are the types of issues faced by many campaigners who utilize social media to educate on self-sourced abortions. “It's sort of a big, big black box when you get disabled on these social media platforms, without any information as to what you’ve done that would bring that action,” Wells says.

Christie Pitney is a women’s health nurse practitioner and a certified nurse midwife who manages the Instagram and TikTok accounts Forward Midwifery, which post informative and supportive content about abortion. She echoes Wells’ sentiments. “On TikTok, I’ve had a number of my videos taken down,” Pitney says. “People report it, they take down the video, and TikTok gives you the opportunity to appeal it.”

Pitney adds that she’s had no problem with reposting videos after they’ve been removed. “It doesn’t seem that they have a very consistent way of determining what videos stay and what videos go,” she says.

“We are very careful not to give advice through social media, because it’s not secure.”

When they’re not dealing with takedowns and shutdowns, campaigners are often fighting misinformation on social media. For Pitney, this seems to be more of an issue on Instagram. “I see a lot of posts about the technicalities of heartbeats or how unsafe self-managed abortions are, which the research has shown is not true,” she says. Pitney believes that many of these posts are created by anti-abortion groups, who use pro-choice hashtags to amplify the reach of their content.

Christie has started collecting a record of false information she’s found on Instagram. Among the posts she’s reported are ones that claim “over 11 million women have used abortifacients as contraception” and that “being pro-choice is against human rights.” There are also alarming, inaccurate statements on the platform about self-sourced abortion: An organization called Students for Life of America, for instance, posted, “Chemical abortions are four times as risky as surgical abortion.”

This statement is categorically false. “To make it clear, there have been studies done,” says Dr. Zoe Thill, a family medicine doctor and abortion provider in New York, when asked about the safety of drugs used for self-sourced abortion. “What people are getting through the mail right now is chemically identical to what they would get at a doctor’s office. These medicines that we give people routinely are very, very safe, and there are very few contraindications for the vast majority of people.”

Thill adds that risks associated with self-managed abortion stem “largely from the surveillance and policing of people, particularly women of color, rather than the medical procedure or the medication. People delay care or they don't tell their providers the full truth about what's happening, because of that policing infrastructure — and that can lead to an increase in harm.”

The threat of surveillance on social media is one abortion-rights education organizations take extremely seriously. “We are very careful not to give advice through social media, because it’s not secure,” says Susan Yarnow, a spokesperson for SASS (Self-managed Abortions, Safe and Supported), a project of the international nonprofit activist organization Women Help Women.

“If somebody writes to our Facebook page with a question, they’re directed to our secure portal,” Yarnow says. “If they ask a question, they get back a randomized web link, and the answer to the question would be there. That web link would be blanked out in seven days. So if, for some reason, someone has involvement with the police, there would be no information in their electronics to incriminate them.”

“The situation is horrible right now in Texas, but it’s bringing a level of outrage that we haven’t seen in our country recently.”

SASS’s high level of digital security was designed, Yarnow says, to minimize the risk for people seeking self-managed abortions. “We've had around 24 people arrested in various states for using pills on their own,” she warns. “There have been cases where people were charged, and there was evidence that they had searched or asked about abortion on their electronics.”

Despite all the issues groups like Plan C Pills face on social media, their message seems to be getting through in the wake of SB 8. News of the Instagram ban got a good amount of attention on other social media platforms, and Plan C Pills’ Instagram went from 4,000 followers to 26,000. According to Plan C, its web traffic skyrocketed from 1,000 visitors a day before SB 8 went into effect to over 30,000 in the days that followed. (A supportive tweet from Rep. Alexandria Ocasio-Cortez certainly helped.)

“​​The situation is horrible right now in Texas, but it’s bringing a level of outrage that we haven’t seen in our country recently,” Wells says. “In a way, the legislators are shining a spotlight, allowing us to say, If you’re not outraged, you’re not paying attention.” Now we must wait and see if this wave of online activism translates to support for these campaigners and advocates where they need it most: IRL.