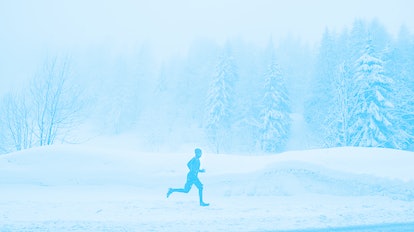 Chilly temps may send you indoors, but scientists offer compelling reasons to stay active outside.

When Shingo Kajimura was a graduate student at the University of Michigan, he struggled through frigid, snowy winters. Shivering each time he ventured into the early evening darkness, he wondered: Why can animals like squirrels and bears seemingly adapt to cold environments, while he had to suffer?

This question set Kajimura on the hyper-specific path to becoming a leading researcher on cold exposure and energy metabolism. Through his decades of study, Kajimura discovered that not only can humans adapt to the cold — they can thrive in it.

Other data jibes with his work, suggesting cold weather can actually supercharge exercise and help people

Chilly activities also help people stave off the winter blues, get their dose of vitamin D, and enjoy nature.

"If you combine cold and exercise, it has an additive or even synergistic effect," Kajimura tells Inverse. "But how this synergy works at the molecular level is not really clear."

The science doesn't encourage stripping down to a tank top and shorts in freezing temperatures — actions that can increase the risk of hypothermia. And if you have any risk of cardiovascular disease, cold-weather workouts also aren't recommended, Kajimura cautions.

However, if you are healthy, stretch, and gear up appropriately, you don't have to let the winter months lock you inside. Staying active in all seasons will spur positive side effects that last long after spring arrives.

Is it healthy to exercise in winter?

To fully grasp how humans deal with cold, you have to understand homeostasis – the body's built-in, self-regulation mechanism that maintains stable internal conditions optimal for survival.

Humans' core body temperature is 37 degrees Celsius, or 98.6 degrees Fahrenheit. To keep our internal machines running smoothly and achieve homeostasis, the body favors operating at this temperature. In turn, when we're overheated, we sweat. When we're chilly, we shiver.

Sweating doesn't dissipate energy — it's just a way for our bodies to cool off. However, shivering requires energy and produces heat.

"In a cold environment, at rest, we burn more calories than we do in normal temperatures," David Rogerson tells Inverse. Rogerson is a sports nutritionist and strength conditioning expert at Sheffield Hallam University.

The science of fat burning — If you're interested in increasing energy expenditure or losing weight, Kajimura says: "It makes a lot of sense to exercise in the cold."

Why? For about the first 10 to 30 minutes of cold exposure, muscles shiver to make heat. But it isn't possible to shiver indefinitely, because lactic acid builds up in the body.

Brown and beige fat activity is closely linked with metabolic health and can suppress inflammation. It also appears to influence the post-exercise "afterburn" or how much the body burns at rest.

"If you have more brown fat, you're more protected from the age-associated obesity or insulin resistance, type two diabetes, and cardiovascular diseases," Kajimura explains.

Cold is the "most potent activator" of brown fat.

Resistance exercise, intermittent fasting, and even certain interventions like bariatric surgeries, are also known to activate brown fat. But critically, cold is the "most potent activator" of brown fat that we know of, Kajimura says.

Researchers are still determining the minimum threshold when fat browning kicks into gear, but Kajimura suspects the process activates in relatively mild cool temperatures. Essentially, achieving these metabolic benefits doesn't require hours in a cold freezer or a 10-degree day, but could occur with regular cold exposure around 40 degrees Fahrenheit.

Cold weather can also improve endurance, enabling you to go longer and harder during your workout. That's because the body doesn't have to work as hard to regulate temperatures as it would in hot climates.

"When we do prolonged or cardiovascular exercise in a cold environment, we can better regulate our temperature and not overheat, improving performance — particularly for cardio," Rogerson says.

That's because time outdoors is a known mood-booster. It can counter the winter blues or seasonal affective disorder by enabling people to get their adequate daily dose of vitamin D from the sun.

"During times of stress and the winter it's easy for us to hunker down and hibernate," Rogerson says. But this often means we move less, eat a bit more, and exacerbate unhealthy lifestyle choices.

"Couple this with the stress of dealing with life during a pandemic, then we have a recipe for poor physical and psycho-emotional health; two factors that regular exercise and physical activity are known to play a massive role in preventing and treating," Rogerson says.

Even little steps matter in the long-term, Kajimura says. Heading outside during winter for a quick refresh and reset with some deep breaths is "better than nothing."

It can increase the risk of muscle injury, breathing issues due to dry, extra cold air, hypothermia (a dangerously low body temperature when your body loses heat faster than it can produce it), and cardiovascular problems for people with a history of heart trouble. In cooler conditions, the body tries to prevent heat loss by shrinking blood vessels, which can heighten blood pressure and cause adverse cardiovascular events.