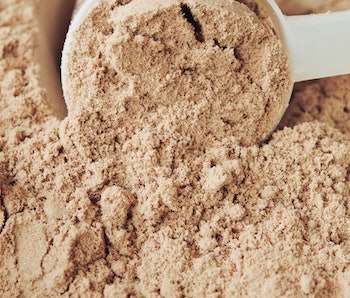 Humans go to extreme lengths in the name of efficiency, especially when it comes to food and exercise. Who hasn’t been lulled by the idea of ten minutes of high-intensity interval training instead of an hour of constant biking or a protein bar instead of actual food? As is often the case, a viral social-media trend takes this tendency to a new level. This time it’s dry scooping.

Here’s how it works: You scoop up your pre-workout supplement powder and then knock all that bone-dry powder back like it's a tequila shot and swallow it. Fast, efficient, effective, right?

Adherents believe dry scooping is an easy gateway to peak performance and gives an instant energy boost. But sports nutritionists, physicians, and athletes caution against the practice.

At best, dry scooping probably doesn’t taste great and will likely draw scoffing from your fellow gym-goers. At worst, health professionals say dry scooping can cause choking or cause the powder to be inhaled directly into the lungs, spiking the risk of infection, pneumonia, or breathing complications. Some reports have even linked dry-scooping with cardiac problems and heart attacks because pre-workout powder commonly contains stimulants like caffeine.

“I just thought that it was another silly trend that people were doing on social media to get some likes and attention,” Walters says. Walters tried dry-scooping himself to get past the sometimes “gnarly” taste of certain pre-workout powders, but he would not recommend it.

“If you mess it up even a little, you’re in for a world of hurt,” Walters says, “coughing like you’ve smoked a pack a day for 20 years.”

Antonio emphasizes that while the benefits of dry-scooping are non-existent, the risks can be severe: “You might choke on powder.”

What is dry scooping?

Typically, athletes consume pre-workout supplement powders mixed with water or a smoothie. But some folks decided to skip the liquid mixer and take the powder. The idea is that no liquid means you feel a buzz faster.

Dry-scooping got its moment with the dry-scooping challenge, echoing the infamous cinnamon challenge of the early 2010s, which popped up across various fitness influencers’ YouTube channels and the feeds of everyday athletes and bodybuilders. Some participants cough and sputter their pre-workout powder as they struggle to get it down, while others manage to swallow it back seamlessly. The result, concerningly, is people thinking dry scooping is key to peak performance and ultimately athletic or aesthetic gains.

Tanya Miller, a 27-year-old graduate student and amateur bodybuilder from Columbus, Georgia, has made dry-scooping a mainstay of her routine but strictly using creatine powder.

“Creatine dissolves rapidly with little water, so no problem,” Miller tells Inverse. “And hey, I don't waste any milligrams on the inside of a container.”

But ultimately, the dangers of dry scooping come down to three significant risks:

Most pre-workout formulations include a range of common ingredients: caffeine, beta-alanine, taurine, creatine, and nitric oxide. Each component is thought to influence exercise performance, muscle recovery, energy, and endurance, with varying levels of evidence behind their claims. But without water to dilute the concentration, some health professionals say people can overdose on certain ingredients, especially caffeine.

Should you try dry scooping?

TikTok user @bagels4everr posted their unfortunate experience on the social media platform in 2021.

Aside from a lack of evidence and the potential for choking and heart issues, there are other problems with dry scooping that should make you think twice.

Instagram and Facebook offer polished highlights of people’s so-called “perfect life,” and fitness influencers often show off the “perfect body” — and their purported tactics to achieve it. Influencers may encourage dry scooping, among many other strategies, with no actual proof they do these things.

Personal trainer Walters says this trend of fitness influencers creating viral tips or tricks isn’t new, but he is concerned that influencers may be doing more harm than good within the health community.

“Don’t do everything you see on the internet,” Walters says.

“These people that you are comparing yourselves to live in the gym. Dry scooping isn’t what’s getting them shredded or jacked; it’s the hours and hours you don’t see. Just live the best version of yourself and be healthy.”