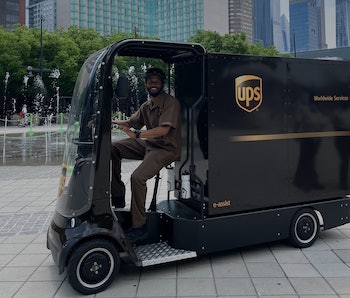 UPS has begun testing an all-electric vehicle that’s a little different than its standard delivery vans. The company is trying out new electric cargo bikes that look a lot like skinnier, squattier versions of the classic UPS truck. “Full circle for a 100+ yr company that started as a bike messenger service,” the company’s Public Affairs segment tweeted.

Besides being chic as hell, the electric cargo bikes are an easy way for UPS to reduce its carbon footprint in crowded cities. The cargo bikes are obviously chunkier than your typical road bicycle and therefore can’t weave through traffic quite as well — but they are thin enough to glide through a dedicated bike line. (If that lane is clear of double-parked UPS delivery vans, that is.)

The cargo bike, which is technically called an “eQuad,” is made by a company called Fernhay. It’s about 10 feet long, with six feet of that length dedicated to cargo space. The eQuad operates very much like any other electric bike; riders pedal along with some assistance from an electric motor.

Is this... safe? — The cargo bikes are currently in testing in New York City and some locations in Europe. There’s a conundrum here, though, because the places where this tech would be most useful — heavily congested areas like Manhattan or Brooklyn — are also some of the most dangerous spaces for bikers to traverse.

Watch the video above and tell us you don’t feel even a little bit nervous seeing this vehicle pulling out into NYC traffic. This guy’s wearing a helmet, sure, but there aren’t even any doors on this thing.

To be fair, there are far more motor vehicle accidents in NYC that don’t involve a cyclist than those that do. Still, cyclists are generally more prone to sustaining injuries when accidents occur. That helmet will only protect so much.

The race for greener deliveries — The eQuad won’t be the right vehicle to replace every gas-guzzling UPS truck, but it could prove immensely efficient in areas where driving is more trouble than it’s worth. Add to that the eQuad’s general sustainability and you have a winning formula. Shrink the van down small enough that it can be powered by electric pedals and you end up with a cute little van-bike hybrid that’s both better at making deliveries and far less harmful to the environment, too.

Delivery vehicles are a necessary component of the world’s infrastructure, especially now that we do so much of our shopping online. Finding replacements for chunky gas-guzzling vans is proving to be a slow process, with companies like USPS struggling to adopt greener alternatives.

In case the eQuads don’t work out, UPS has some other green delivery systems in the pipeline, including drone-like aircraft and all-electric cargo vans.