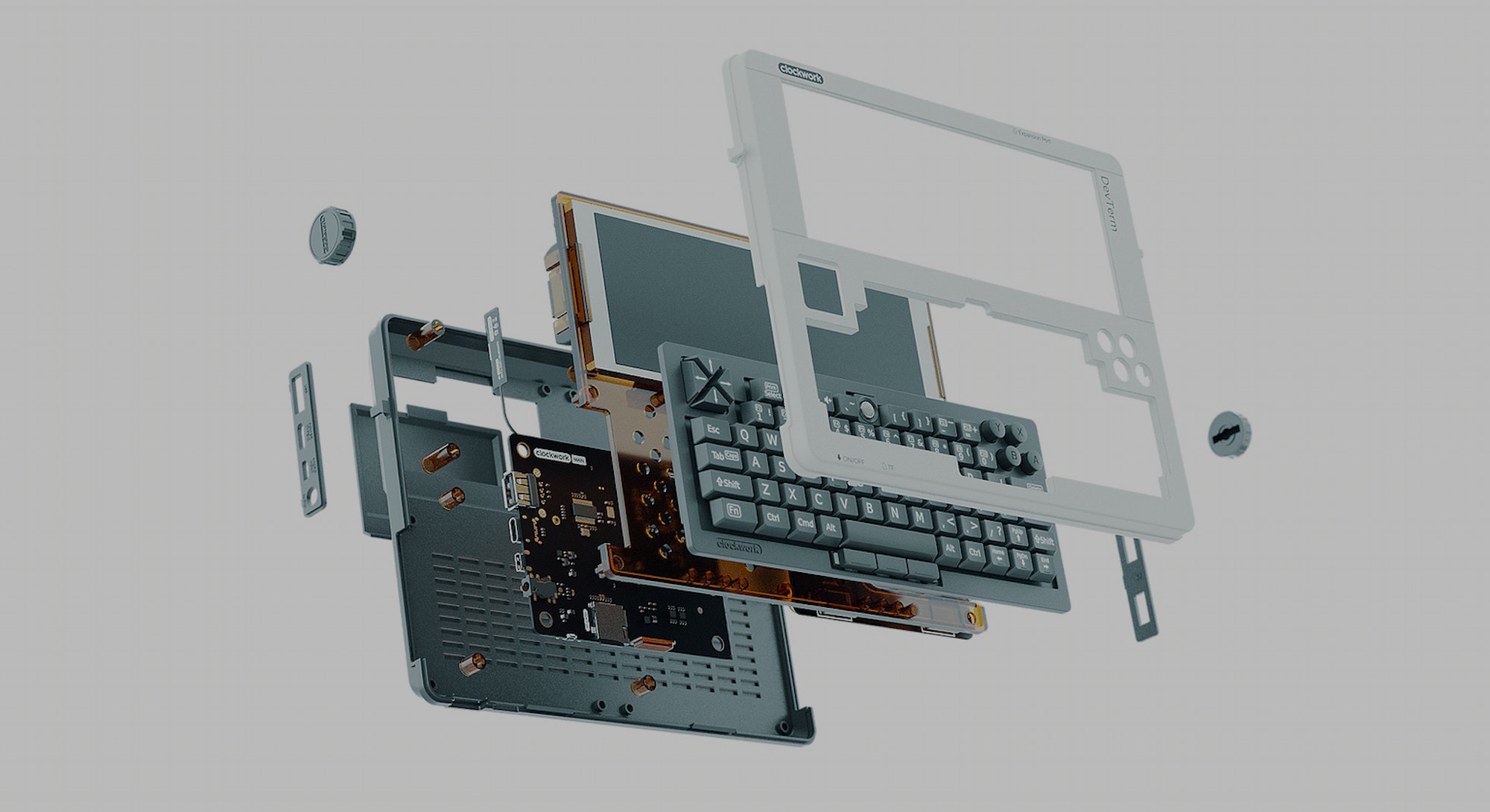 I am simultaneously the best and worst person to own a DevTerm.

On one hand, ClockworkPi’s new, long-hyped ode to retrowave cyberdeck aesthetics is exactly the kind of thing someone like me would rush to pre-order — a straightforward, cool-as-hell looking, build-your-own computer project easy enough for beginners to the hobby. In that regard, the DevTerm nails its delayed landing. This was my first time assembling a computer from disparate parts, and despite my worry of immediately breaking off a thingamajig or snapping a doodad (those are the technical terms, right?) the clearly illustrated instruction booklet reminiscent of Lego how-to’s helped me build my DevTerm kit in less than an hour.

What’s more, I then successfully booted up the minicomputer with zero issues. After updates, the DevTerm’s ClockworkPi OS came preloaded with all manner of open-source programs and games, including both the entire LibreOffice and Minecraft Pi, as well as both Firefox and Chromium web browsers. I had no trouble connecting to Wi-Fi, customizing the ultrawide 6.8-inch IPS display and appearance, browsing the web, and watching videos. And then...

Aesthetically cool as hell with a burgeoning open-source community and endless customization options, the DevTerm is a great DIY kit, even if the learning curve is a bit steep.

Well, that’s where I become the antithesis to DevTerm’s targeted demographic. ClockworkPi’s new offering, while easy enough for a child to build and use, is definitely designed for the hardcore programming and coder types looking for a cool, portable system to tinker with, or to aid other projects. You can even opt to get a thermal printer expansion module — mine came with one, but alas sans paper. I would love to tell you of all the ways I was able to link up my DevTerm to my actual laptop for badass hackathons... but really I was pretty much stuck with what came preloaded on the included microSD card’s customized ClockworkPi OS. Which, to be fair, is more than enough to justify splurging on even one of the DevTerm’s base setups.

There are four core modules alongside the RaspberryPi CM3 with five different configurations (you can also buy a DevTerm sans additional core), but I couldn’t tell you which option would work best for you.

Thankfully, ClockworkPi can for me:

The A-04 series and RPI-CM3 are suitable for general purposes with longer usage time, such as writing, coding, e-mails, making indie-games, running most video game emulators, etc. ...For users who require high performance and computing power, such as for AI/algorithm development and tuning, rapid prototyping of embedded devices, speeding up your compile-time, etc., the A-06 series will provide you a better solution.

And while I will most certainly not be using my DevTerm for “AI/algorithm development and tuning,” there’s still a helluva lot to explore here.

Obviously, one of the biggest draws to the ClockworkPi DevTerm are the aesthetics. This is a product designed with both form and function equally in mind, but it’s the former (no pun intended) that really shines from the very start of usage. Heavily inspired by old-school personal “microcomputers” of the past such as the Tandy TRS-80, the DevTerm eschews the renewing trend of pastel color schemes for muted grays, off-whites, and blacks for maximum “cool” factor, while its minimalist logos and keycaps add to the overall feeling of utilitarianism.

One of the case’s most eye-catching features are its two side knobs. Unfortunately, they do nothing apart from snap the front and back casings together, allowing for a simple mechanism to quickly and easily access the computer’s innards for customizations and add-ons. While the somewhat pointless knobs have drawn some criticism for its clunkiness, I personally really enjoy their vestigial feeling. They definitely look like something that someone might have considered “edgy” or cool 30 years ago, which sort of adds to the overall throwback motif.

Tiny typing and a mini mouse

In terms of tactile feel and usability, the DevTerm is a lot of fun, even if you are dealing with a pretty compact working environment. With a 67-key keyboard at 65 percent the standard size, you will not necessarily be cranking out your novel or new coding project as fast as you normally would, but I found that this was actually extremely enjoyable. It didn’t take long to adjust to the mini-keyboard, and clacking away using my two index fingers allowed me to slow down and collect my thoughts instead of worsening my inevitable tendonitis.

It didn’t take long to adjust to the mini-keyboard.

In lieu of a touchpad or mouse, the DevTerm opts for an old-school trackball in the center of the keyboard, with three standard mouse buttons also at the bottom. It’s responsive and feels pretty good, although there’s no denying the setup can greatly slow down your cursor speed, especially when taking the super long 16:6 screen display into consideration.

All that said, the DevTerm design includes three ports for standard USB, one for USB-C (which can also recharge the device), and a micro HDMI outlet. With Bluetooth also enabled, it’s no sweat to link up some external peripherals like a dedicated mouse or a nice mechanical keyboard to ease usability restrictions.

Another promising feature on the DevTerm is its inclusion of a set of four old-school gamepad arrows along with eight buttons for all kinds of retro gaming goodness. The entire keyboard component comes with a Micro USB-UART programming port for easy customization, and a USB POGO Pin on its back to make installation a breeze.

Of course, something this DIY and this committed to open source work is gonna inevitably lead to a few compromises and less-than-streamlined choices for users. The DevTerm’s speakers are pretty much exactly what you would expect for a device this size and price — that is to say, tinny and rather flat. However, the addition of a headphone jack and the DevTerm’s Bluetooth capability means that you can use pretty much whatever peripheral sound setup you might want.

Perhaps one of the more limiting issues is the computer’s battery situation. The DevTerm comes with terminals for two 18,650 lithium-ion rechargeable batteries. In my experience with ClockworkPi’s new offering, I managed around five or so hours on a single charge. Now, that said, I wasn’t doing a whole lot of taxing work on my DevTerm, either (see the newbie admissions above). Pushing your DevTerm’s specs will definitely result in shorter battery life, which somewhat kneecaps the whole “portable coding” angle. Then again, no one is expecting the DevTerm to replace their main computers and laptops, and 5 hours on that 65 percent-sized keyboard is more than enough for most normal-sized hands.

ClockworkPi’s whole ethos centers on open-source builds and DIY community support, as evidenced by its active GameShell forums, so it stands to reason that DevTerm’s discussions will follow, too... eventually. With literally all of ClockworkPi’s DevTerm stocks depleted at the moment, only those eager customers who pre-ordered one can expect to get them right now — unless you’d prefer to 3D print the casing and assemble the parts yourself, something ClockworkPi is more than happy to help you with. In any case, the current forum activity is pretty muted these days, and will understandably take some time before building out to be of real use to anyone.

After months of delay, ClockworkPi’s DevTerm and all its variations are finally here... once they’re back in stock. While not a powerhouse of computing capability, it’s a really solid base for beginners looking to attempt their first DIY build, novices wanting a learning tool, and experienced programmers looking for a cool, portable throwback to customize to their hearts’ content.