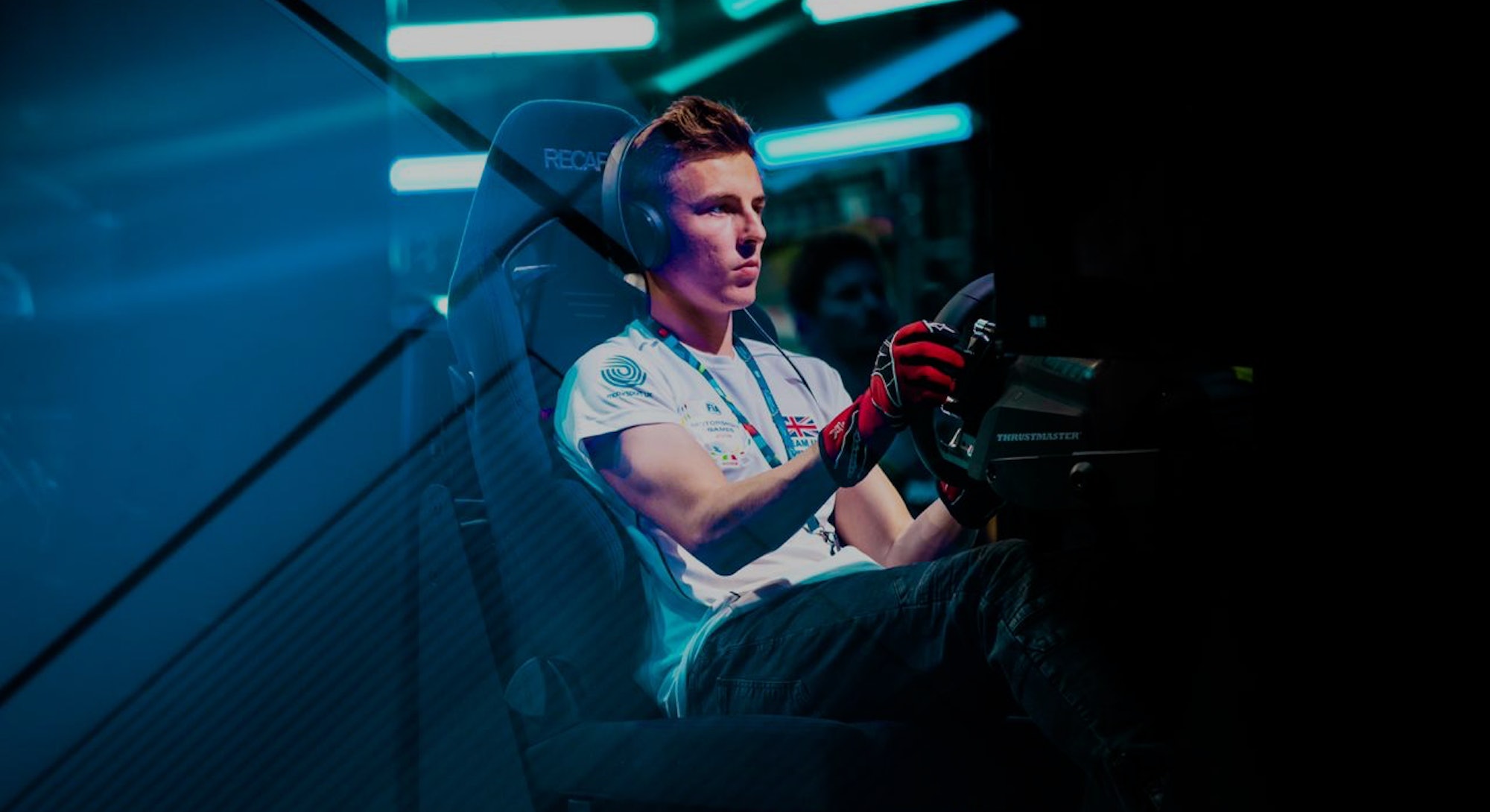 When the first lockdown hit the U.K. in 2020, Matt Alexander, an associate director at an IT development company, turned a spare room in his Essex, England, home into an office. The centerpiece was a three-monitor setup.

The multiple screens were meant to make it easier for Alexander, now 42, to address work emails, juggle spreadsheets, and keep track of developments his team made to software. “I made sure I made something quite nice,” he says. “I had them set up so you couldn’t see the gaps between them.”

His mind quickly turned to extracurricular activities. “My brain thought, when I looked at that, This would be brilliant to play racing games,” he says. Alexander loves cars, and he loves driving fast — though admits that’s difficult to do legally. “I thought, I could strap a wheel to my desk, and I’d have this ultrawide gaming setup,” he says. “That would be fantastic.”

He bought a steering wheel gaming peripheral from a local computer store for £180 ($210) and put it on his desk. Alexander began by playing popular racing games, but soon graduated to a more advanced level of computer-based racing called sim racing. He bought a subscription to iRacing, which was exactly what Alexander was looking for: It gave him the ability to test his racing prowess against others online in a realistic environment.

Unlike basic racing video games popular on home consoles, which allow users or computer-controlled players to catch up to each other if one player tears away too fast, iRacing is designed to mimic as accurately as possible the realities of racing on an actual track.

There was just one problem: Alexander’s racing wheel wasn’t going to cut it. “It kind of escalated from there, and my rig’s now sophisticated,” he says. It includes haptic feedback that helps him feel his way around the track, and more accurately mimics the machinery involved in a real car steering wheel. Alexander even wears a VR headset to more deeply immerse himself in the races. Overall, it has cost him £6,000 ($7,000).

“You could go up to £50,000 or £100,000 if you wanted to be serious about it,” Alexander says. The sim racing equivalent Pimp My Ride exists on YouTube, where high-end racing rigs are presented in awe-inspiring videos. Top-end simulators include hand-stitched seats; 200-degree wraparound screens; feedback on wheels, seatbelts, and pedals; and mechanics that move the driver around within the rig.

It’s not just money that Alexander has invested in his hobby — it’s time, too. “It’s a hobby I’m starting to take more seriously,” he says. He joined the Nevo Sim Racing League, where he currently stands 21st out of 32 competitors in the British F4 Series (confusingly, eight nationalities are represented in the league, including Americans and Canadians, though most of the competitors are in the U.K. and Europe). The league, he says, is a “really nice, happy environment.”

Sim racers broadcast their races live on YouTube. They also post tips, tricks, and ideal rig setups meant to help eke out split-second advantages. That’s vital, as at the highest echelons of competition, racers compete for real prize money. Some of the most popular YouTubers have tens or even hundreds of thousands of followers.

Alexander races every week in the league against his competitors. It is not a casual pursuit. Ahead of his first race of the season at the virtual depiction of U.K. racetrack Snetterton, Alexander put in six weeks’ worth of training, doing more than a thousand laps of the circuit, to know its every twist and turn. “That probably says a lot more about my ability than it does about what’s actually needed,” he says. “But it kind of gives you an idea of what time went into it.”

The streamed race featured live commentary by Chaz Draycott, a 29-year-old self-described motorsports fanatic from Cheshire, England who has built a niche as a commentator and broadcaster specializing in sim racing. Draycott doesn’t just share his expertise on sim races, though: His actual career is providing commentary for real-life motorsports around the world.

He came across sim racing when he watched the BSRTC, the British Sim Racing Touring Cars championship, which uses iRacing. “It was good fun and really well broadcast,” he says. He wanted to start sim racing himself, but couldn’t, because his desktop computer wasn’t fast enough to run iRacing.

“Through a friend I was in a band with, I met a guy who makes gaming PCs,” he says. “He had one going, and ended up giving it to me because he was fed up waiting for me to pay for it. The first thing I downloaded was iRacing.” Now, when he’s not providing commentary, Draycott sim races as a hobby.

Draycott has a theory as to why sim racing is so popular. “We all know the real world of motorsport costs a hell of a lot of money to do,” he says. “This is our way of racing without doing it for real because we can’t afford to do it for real.” Sim racing, says Draycott, is “the next best thing and the closest we’ll get, because you still get the forces through the wheel and the adrenaline of racing against people.”

Racing on real circuits is the dream for many of those who take up sim racing, even if they’re all too aware that it’s, generally speaking, beyond their ability and finances. But for some, including Cem Bolukbasi, a Turkish racer, and Rudy van Buren, a Dutch driver who was recently unveiled as a Formula 1 development driver for major team Red Bull, sim racing has proven a dream ticket to achieving those goals.

James Baldwin, who is 25 and from the U.K., is a sim racer — as well as a real-world competitor in the 2020 British GT Championship, where he won one race in the season and came in pole position after qualifying three times.

“I got into racing in about 2005 when I was eight,” he says. “My dad took me to a local indoor karting center.” Baldwin began competing in go-kart competitions. “The common story with any young racing driver is they do karting, then they try and graduate into cars and run out of budget, and that’s the end of the road. That was my story,” he says. He raced twice in the Formula Ford championships after he and his family saved up the cash to compete, but ultimately the economics didn’t work.

He quit racing and took a couple of years off. But he still had a strong desire to drive. He bought a cheap sim racing set from a local computer store. “It looked pretty cool and was fairly similar to the real thing,” he says. Like Alexander, Baldwin began playing more and more after work at his job as a CNC machinist for a motor gear manufacturer. “I thought, You know what? There might be an opportunity here to make sim racing a job.”

In 2018, he worked his way up to a pro sim team called Veloce eSports. “They made my hobby a profession, because they were paying me a salary,” he says. The next year, he won a competition called World’s Fastest Gamer. The prize for winning that competition was a real-life seat in a full season of GT racing. “That was the big changing point in my career — and my life, really,” he says.

“Sim racing is getting more and more popular because people realize, ‘Wow, this is what it feels like to be a racing driver.’”

Now Baldwin simultaneously races sims and in real-life, although finances limit how much he can do the latter. Baldwin says there are key differences in the skills needed — notably the strength to wrangle a 2,800-pound hunk of machinery IRL — but the similarities are significant enough that experience in one type of racing helps him with the other. “I feel like they complement each other,” he says.

Sim racing can also help those seeking an actual job in motorsports that isn’t behind the wheel, Draycott says. “A lot of the sims now are so realistic in the way they read and interpret data and put it out again that people can go for real-world engineering jobs in race teams based on what they learn in a sim,” he says.

That realism is what draws people in, Baldwin says. “It’s getting more and more popular because people realize, Wow, this is what it feels like to be a racing driver,” he says. “And I can say firsthand, if you get the right equipment and put a VR headset on, turn the graphics way up, it’s very close. It’s very close.”