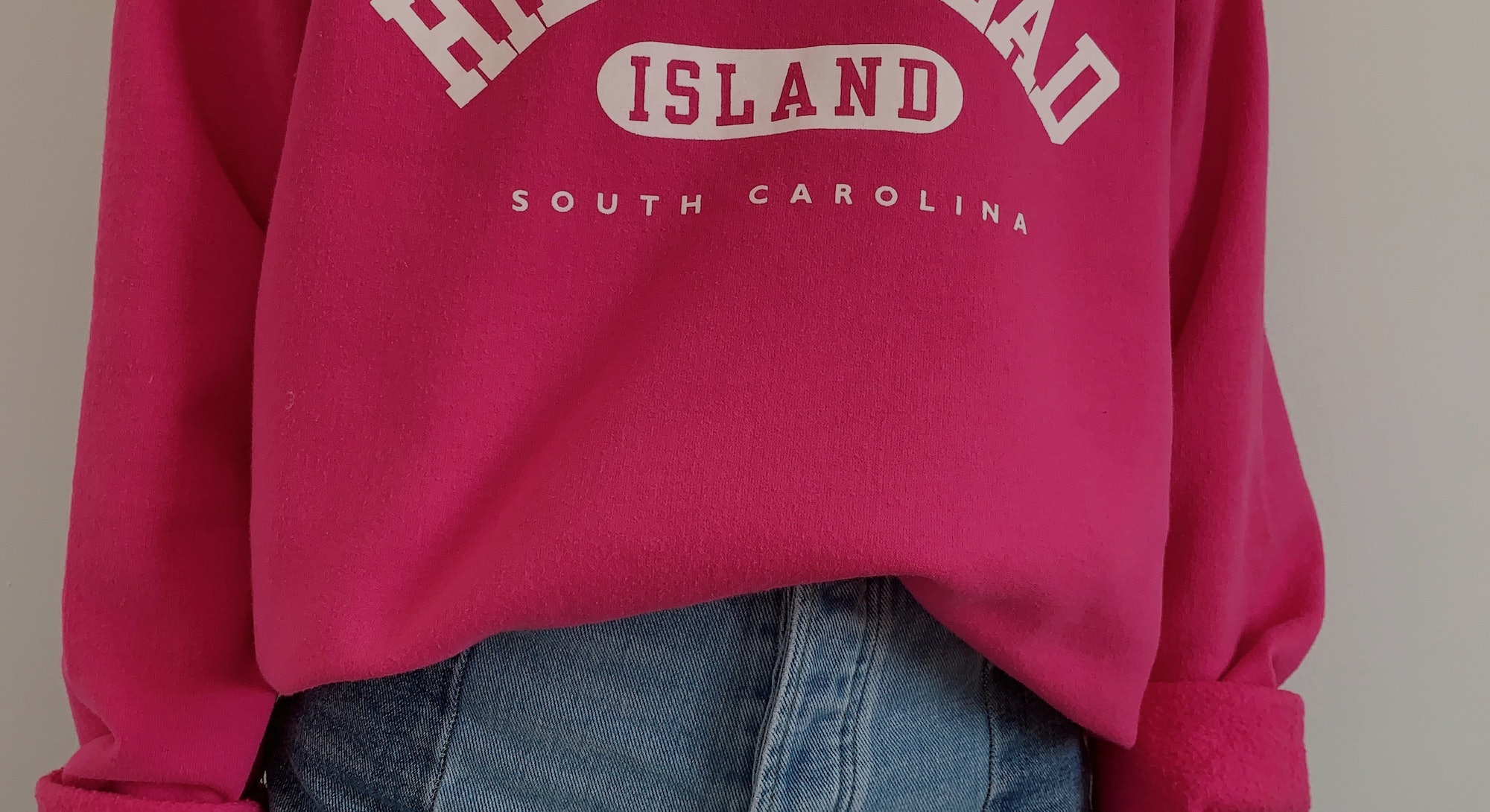 Carly Shipman, who hails from the suburbs of Chicago, lives the typical life of a high schooler. She goes to class every day, then to track practice in the afternoon. In between, there’s homework, watching movies, and browsing TikTok. And like millions of Gen Z kids, she spends a lot of time on Instagram.

But unlike other teenagers, opening the Instagram app is like clocking into work for Shipman. Before she goes to school, she takes outfit pictures when there’s good natural light in her room. During her free period, she replies to customers and updates them on orders. After school, she packages products and prints shipping labels, or goes to Goodwill to buy merchandise she thinks her customers will like.

These “customers” are the 24,000 Instagram followers Shipman and her friend, Merrigan Allen, both 16, have on their shared account @funkyythrifts. Each post is a clothing item for sale, with sizing, brand, and condition information, along with BIN (buy it now) price and a starting bid amount. During the open window for bids, comments roll in below their posts — $5, $28, $40 — as hopeful buyers keep track of the going price.

Once an item is “sold,” the seller and buyer move to direct messages to coordinate shipping and payment, typically executed through Venmo, PayPal, or CashApp. A successful transaction requires constant communication, from responding individually to buyers who have been outbid, to following up on payments and answering a deluge of DMs that constantly stream in.

Shipman and Allen have, essentially, created their own version of eBay inside Instagram — and it’s time-consuming work that keeps them busy. “There’s really not a lot of free time at all [for us],” Allen tells Input. There are likely thousands of accounts akin to @funkyythrifts across Instagram, largely run by teen girls and young women. They all lean into similar buying rules and aesthetics (@wavythriftz, @raddthrifts, @savvythriftz… you get the picture).

In recent years, Instagram has made shopping your feed a near-seamless experience, which has spawned an endless stream of brands that only exist on the app. But the thrifting accounts toe a line between the personal and commercial. Auctioning off old clothes on Instagram is a very 2020 part-time job, and it follows in the footsteps of other ways teens use social media apps outside the norm.

“When you look at the history of the internet,” says Jeremy Morris, associate professor of media and cultural studies at the University of Wisconsin-Madison, “a lot of the early spaces for communities also became places where people would either trade or barter.”

Since starting their account in May 2019, Shipman and Allen say they’ve sold over 400 items — almost every garment posted. Together, they mail out dozens of packages a month, and said they spend so much money and time at their local post office that USPS workers now know and recognize them.

Their profits are modest, about $400 during a good month, but Shipman and Allen say it’s not all about the money. Instead of working a typical part-time job for teenagers, the two get paid to do something they enjoy, and say they’ve gotten closer while running the store. Other Instagram shop owners say profits vary depending on how much time they invest, but some reported making up to $1,700 a month.

Teenage sellers, many of whom migrated from established resale apps like Poshmark or Depop, say they noticed thrifting Instagram accounts proliferating around summer 2019. “I sold some stuff [on Depop], but I feel like there are so many people on there, and it wasn’t really personalized,” Allen says.

Charlotte, a 16-year-old in Maryland, started selling clothes from her closet on Poshmark in early 2019. She moved to Instagram in May after seeing other accounts selling successfully on the app. For Charlotte, who sells under the handle @happyy.thrifts, deep knowledge of Instagram’s features made the move easier. Even though apps intended for e-commerce have more of the right features, Instagram sellers have figured out how to use, say, Story highlights as an FAQ page.

Shopping on Instagram is nothing new. Streetwear resellers were early adopters of the app as a way to sell sneakers and apparel, while new tools for brands and retailers have made Instagram resemble a giant shopping mall. But the thrifting accounts are especially ingenious; bidding via comments keeps user engagement high, a key metric that can help shops game the omnipresent Instagram algorithm and appear more regularly in users’ feeds.

This is important because Shipman, Allen, and Charlotte want the experience to feel as if a friend is selling you clothes. They say the relationships fostered with customers, as well as other sellers, is a reason to use Instagram instead of Depop or Poshmark. For one, it’s common to see thrifting accounts do cross-advertising on their pages, typically in the form of a Story post that costs around five dollars. The “shout-outs” practice creates an endless supply of accounts for buyers to follow.

Owners might also give one-on-one advice to customers about what to wear to school, or talk more generally about classes, sports, and life. “It’s not just a thrift account where we just sell clothes,” Shipman said. “[On Instagram], it’s like we actually have interactions with people.”

And even on the unorthodox marketplace of Instagram thrifting, wider Gen Z industry trends come to the surface. As young people increasingly become the face of climate activism, many Instagram shop owners say they hope their business can make a dent in the global warming phenomenon. Although fashion’s precise contribution to climate change is murky, the wastefulness of the industry — from retailers releasing hundreds of items per week to destroying unsold merchandise instead of donating it — is undeniable.

Teen sellers also listed fast-fashion’s labor practices as a reason they’re motivated to sell items through Instagram. “We’ve helped 400 clothes be reused and re-loved by someone, instead of being thrown back into the landfill,” Allen says. Shipman adds, “Australia's on fire. The world is falling apart.” For some teens, those climate anxieties tie into their buying habits; the resale market is projected to double in the next five years, and Gen Z shoppers are driving that growth.

“We’ve helped 400 clothes be reused and re-loved by someone, instead of being thrown back into the landfill."

As traditional brick-and-mortar stores try (and fail) to fend off online shopping, resale sites have proliferated to meet the tastes of younger generations. And as digital labor is increasingly considered a viable career path — a 2019 study found 86 percent of young Americans want to become an influencer — turning online habits into cash is a natural progression. The Instagram thrifting accounts are the resulting perfect storm. If Nordstrom’s shoppable Instagram feed is the digital equivalent of a mall anchor store, the thrifting pages are the scrappy kiosks seemingly operated by just one person.

Though these accounts may have found a currently unfilled niche, Instagram doesn’t have the same tools other resale sites provide. For instance, if a buyer backs out of a sale — which, according to sellers, happens regularly — it’s up to the teen business owner to decide how to proceed. Usually, it results in a block. Almost all purchases are final sale, and it’s the responsibility of sellers to track down payments, update buyers on the status of their orders, and handle any issues.

The low barrier to entry, coupled with Gen Z’s general digital dexterity, make thrifting Instagram accounts an easy side-gig to pick up. “I think [people like us] realized that they're capable of doing everything that we're doing and capable of starting their own business,” Allen says. But their longevity is uncertain — the start of a new school year could be reason enough for an account to go inactive. And the renegade thrifting shops are always at the mercy of an app not made to support them.

“There are always these stories of users [using platforms] in different ways,” Morris said. “[How a company reacts] depends on whether or not the platform can find value in the thing that users are doing and take advantage of that themselves.” In other words, Instagram could easily add native features that would mimic these thrift shop's behavior, and that might mean having to share profits with the app.

Last semester, Charlotte wrote her own version of this article, a trend piece about the thrifting Instagram accounts for her Intro to Journalism class (she got an A). Now she’s working on a school paper with the research question “Is thrifting and reselling a viable moneymaker for a teenager?” For now, at least, the answer is a decisive yes.