Q&A: Legendary designer Yves Béhar on his next chapter

“I’m not one of these designers who is known for making everything in white.” 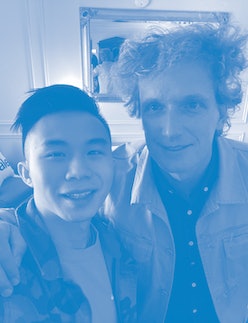 In less than a decade — the first August smart lock was released in 2013 — August has become one of the leading smart lock makers. The company's flagship smart lock has seen three iterations in six years, each adding new features, but none have been as big of a leap as the new 4th-generation version. The new August "Wi-Fi Smart Lock" is not only 45 percent smaller and 20 percent thinner, but also comes with built-in Wi-Fi so that it connects directly to your router and doesn't need a bridge, and a "signage indicator" that lets you know at a glance that the door is definitely locked.

Despite shrinking in size, the integrity of the product hasn't been compromised. It's still as easily recognizable as an August smart lock and very solidly built — an important psychological characteristic that reminds you it's actually tough enough to secure your door.

Yves and Jason Johnson, the CEO and co-founder of August, walked me through the Wi-Fi Smart Lock and as expected, there's a lot of deep thought that goes into making an existing product smarter. How did they refine what already was a well-made product? What was the design process like? Why did they ditch AA batteries in favor of CR17345? How are they keeping hackers at bay in today's breachable smart home society?

I sat down with Yves (and Johnson) at CES to talk shop about the tech he's loving right now and most excited for, the material he's most excited to work with, sustainability and, of course, the new 4th-generation August Wi-Fi Smart Lock, which he designed. The conversation has been lightly edited for clarity.

Input: What is your favorite gadget right now that's not the new August smart lock (haha)?

Yves: My funnest, latest gadget is my electric bicycle. It's kind of changed the way I think about mobility and getting around. I think that both scooters and electric bicycles really make you not hesitate to go somewhere.

Instead of going in a car, you just are outside and you can go on a hike, you can go pick up something, and so those are my two latest acquisitions and fun things to use.

What is the one piece of tech you're most excited for? Whether that's autonomous cars or like anything that's far-flung?

I live in San Francisco so solving city-level transportation is the most interesting opportunity. It's an opportunity to reshape the landscape of a city. To take back streets, to put more people, more housing, more density in cities, which I think is very important both from a human standpoint and environmental standpoint. So I'm really excited about both individual cars and public transportation being autonomous, being on-demand, and clearing the street of all that parking and all those cars.

As a designer, what is your favorite material to work with? What material really challenges you or you love working with?

Over the span of my career, I'm not one of these designers who is known for making everything in white or black or having a singular material.

“I'm not one of these designers who is known for making everything in white.”

Haha, mmm, that guy [Jony Ive] is no longer at that company [Apple].

[Laughs] What I've always been interested in is sustainability and I think, today, with what we see with plastics and packaging, and the environment — we really need to move towards bioplastics. Materials that will not only be recycled, but that will be beneficial for the Earth when they decompose. So whether you're doing packaging or doing products, I think we need to move towards that and there aren't enough new materials. There's research being done, but at scale, currently, what we really need is some environmentally sound material that can be used and reused, and can help us move away from the sort of environmental disasters that we're experiencing.

So, are these August smart locks made of any recyclable materials?

These locks are made out of aluminum, which is the easiest material to recycle and also the one that you can recycle over and over. Plus, [August smart locks] are a kind of product that stays on a door for years, not weeks or days. This is really a product that I hope people will have on their door for 5 to 10 years. Longevity is really important to think about when you design products versus disposability or single use. After its long life, it's certainly a product that will be recycled.

Input: How do you approach designing smart versions of products that already have established form factors?

It's the part of the job that I love the most. You take a category that really hasn't changed — in the case of locks it hasn't changed in 200 years. The original pin-and-tumbler lock is like 1,000 years old. So people have expectations.

They expect to put a key in something. I love the fact that you turn the whole field onto its head because people aren't now looking for sharp little pieces of metal in their pockets. They're interacting with something on the outside that looks just the same, right? There's no way to tell [that the key hole] is different.

But you deliver a level of expectations that gets them to get over what they already know. To go past the familiar and to go into the unknown with trying a new product and adopting a new technology. Usually, if it's well done, that change will be a lifelong change, meaning the second I go from having sharp little pieces of metal in my pocket or bag to holding a phone to unlock as I walk towards my door, I'm never going back, right?

The responsibility to do this right, to do it at a high quality, to do it in a way that is durable is tremendous and I love the sort of the challenge.

When you design something, do you let the hardware components inform the physical form factor or is it the other way around?

It's a two-way street. I mean, certainly, there are components in there that need to be arranged. The natural [lock] movement is a rotation, so let's keep it circular. We could have made it rectangular but then it would never look the same because, every door, the deadbolt goes in at different depths — it may at an angle, so it wouldn't look right.

So you have to think about the constraints in these hard doors, the fact that doors are not perfectly fitted, you need to have some tolerance for the environment and what it requires. Going with a round form factor was what we felt was going to be the most natural for the user, the most intuitive, and the most beautiful on the door.

Then we worked with the engineers and the manufacturing team in order to arrange these components in a circular fashion. You have a motor, you have a lighting element, boards, etc. It's not always easy to fit that in a circle. In this case, it was really the melding of what we felt was our ergonomic and human needs with engineering and hardware and technology.

Did you explore any other types of materials other than aluminum?

So we established a design language with the first one, right? The bigger round cylinder, the texture, the chamfer in the front, the approach to the door, and for me it's important to evolve it. [The Smart Lock] is being imitated a little bit and I just wanted to take it to the next place so it continues to be honorable for us. But look it has worked.

So changing it entirely, from a strategic standpoint, and as a designer changing it entirely would defeat the purpose, which is being No. 1, being recognized, having people love the product, and being the leader in the market. I would call it a strong evolution.

You have to give [users] a more delightful experience, better tactility, and better materials. You have to raise the bar and everything because for someone to adopt this new technology, this new way to operate in our lock, it really needs to be compelling.

If it was a little plastic box that was dangling on your door, where the paint falls off after you use it for a few months, it just doesn't feel like the right next step for that experience.

How did you go about making the Wi-Fi Smart Lock more hacker-proof?

So this is something that we did from day one with Jason. His previous company was actually a security company. But trust from a brand standpoint and from a product function standpoint — software and hardware — firmware was the No. 1 challenge that we wanted to take on from day one.

Today, we're the leader in the space. The app is 4.8 out of 5 stars [in the App Store]. I feel like over the last six years since we launched we've really sort of built that trust by being extremely consistent, by having two-factor authentication from day one, not something that was an afterthought and we did later.

“We are certainly a high-profile company that gets attacked a lot.”

Jason: When it comes to anything that's connected to the internet you certainly have to really think through your architecture to minimize the risk of an attack. We are certainly a high-profile company that gets attacked a lot. A lot of people try to penetrate our systems because it would be big bragging rights if you could penetrate our locks or our cloud services.

So we obviously invest a lot of resources, including hiring outside white hacker firms as they call themselves. We spend a lot of money actually having them do penetration testing on a regular basis because this is all we do, right? We have to do this well. We don't make smart speakers. We're not trying to sell advertising. This is all we do so we have to do it very well.

How long has this new smart lock been in development? What's the installation process like? Installing locks is not something everyone thinks they're capable of doing.

Then we also added this feature which is called DoorSense — it will tell you whether the door may be locked in the locked position, but maybe a jar — and so we're able to tell you that so that's an additional level of peace of mind or security that we give to the user.

Integrating all these elements into the small package is always a wrestling game between engineering, manufacturing, and design. Then really sort of shaping efficiently and evolving aesthetic around all those components is what we worked on from an industrial design standpoint.

So the slight curvature and the transition between the battery door and the unit is a new element. The way the chamfer curves into this little piece of physical signage that tells you whether it's in open position or locked position. You know, these details are kind of what we focused on as well as the materiality and the colors.

Another very important element here is continuing with the early patterns that we developed and making it really easy to put on and off without tools. So this plate allows it to adapt across all the different locks and in the U.S. You can put it in place without needing some tool or some complex operation. So this is what we started with and we continue to refine to a point where it's a fast and easy installation.