'WandaVision' leaks: Mephisto isn't the secret villain, it's someone scarier 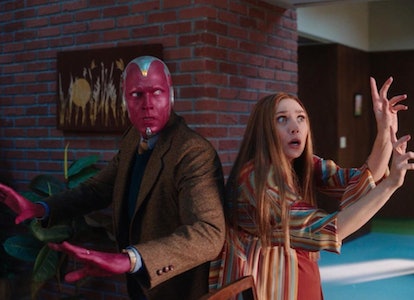 WandaVision somehow manages to be two shows at once. It's an extremely predictable story — was anyone surprised when Agnes turned out to be Agatha Harkness? But it's also keeping Marvel fans on their toes week after week despite an endless supply of Easter eggs, leaks, and theories.

Ahead of WandaVision Episode 8, a new leak plays into this dichotomy once more, seemingly confirming some of our favorite theories while also raising even more questions and squashing a popular rumor. Intrigued? Let's dive in. (Warning. Possible spoilers ahead!)

This WandaVision leak comes to us from 4chan, which would normally be enough to immediately ignore it, but there's a catch. The thread, titled "WandaVision spoilers" and posted on February 14 (days before Episode 7 aired), includes details for that episode which are already confirmed alongside other spoilers for what's yet to come.

Here's what the leaker claimed would happen in WandaVision Episode 7:

>Wanda leaves the twins with Agnes while she repairs the Hex.

>Vision finds Darcy, restores her memories and they discuss his death and rebirth.

>Monica goes into the Hex to rescue Darcy and confronts Wanda with her newfound photon powers.

>They realize that the twins are missing and go to Agnes’ house, where they learn that Agnes is Agatha Harkness.

>In flashbacks, Agatha masquerades as a psychiatrist helping Wanda overcome her grief over Vision’s death in order to control her.

>Under Agatha’s influence, Wanda creates the Hex, which Agatha describes as a dream world but also a “nightmare”.

>Episode ends with Agatha once again putting Wanda under her influence.

Pretty much everything this leaker claimed would happen in WandaVision Episode 7 came to pass. And the things that didn't happen could easily come true in Episode 8. So what else does this leak reveal? Here's where it gets interesting. Consider this your final spoiler warning before we dive into these "Future spoilers."

>Nightmare is the main villain. It’s unclear whether Agatha is Nightmare, working with him or being controlled by him.

>Hayward stole Vision’s body in order to reverse-engineer, weaponize and mass-produce it as Earth’s new line of defense.

>Evan Peter’s is Fox’s Quicksilver pulled into the MCU and forced into the role of Wanda’s dead brother. He gets another “Sweet Dreams” moment in the final episodes.

>According to leaked audition videos, there will be a subplot about Billy being bullied in school and Tommy wondering whether he should use his powers to help him.

>Once the Hex begins falling apart, the Twins will become very sick. At some point, Wanda will apparently be on the run with Billy, while Tommy’s fate is unknown.

Nothing here feels out of the question. We're already expecting Doctor Strange to show up since WandaVision connects directly to his upcoming movie In the Multiverse of Madness. Billy and Tommy becoming sick also makes sense, and fits with their unfortunate arc in the comics that inspired this Disney+ show. The stuff about Hayward and Vision has also been partially confirmed already, and the rest of it feels pretty logical.

The big twist, however, is the claim that Nightmare is WandaVision's true villain. While we've been speculating about this supervillain for a while already, the more popular comics-based theories all argue Mephisto is the show's secret baddie. Meanwhile, Episode 7's ending suggests that the witch Agatha Harkness is the only villain we need.

However, if Nightmare really is WandaVision's main bad guy it could mean Marvel is diverging from comic book history and setting up a major new antagonist in the Marvel Cinematic Universe. Luckily, we won't have to wait much longer to find out.