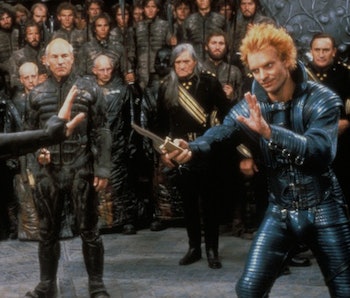 After teasing the entire galaxy with a photo of Timothée Chalamet as young Paul Atreides, the Dune spice is flowing again, this time, with a huge drop of several photos from the Villeneuve’s hotly-anticipated version of the movie, which also reveals several ways this planned two-movie version of Dune will differ from its cinematic predecessors and the original Frank Herbert novel.

Here are the three big ways Villeneuve’s Dune will fundamentally alter the canon of Dune, and why those changes make a hell of a lot of sense. Speculation ahead.

On Tuesday, Vanity Fair dropped several photos from Dune, which sent the anticipation for the outer space epic into overdrive. In addition to Chalamet as Paul Atreides, the cast of the new Dune is perhaps even more impressive than the 1984 version:

Throughout all the photos and info in the new Vanity Fair piece, there was plenty for longtime fans of Dune to chew on, along with some completely new additions.

3. Lady Jessica's role has been expanded

In the story of Dune, Lady Jessica is Paul's mom, and the concubine of Paul's dad, Duke Leto. Jessica is largely responsible for the story, since she intentionally has a son instead of a daughter. (In the rules of Dune, this kind of choice is possible.)

Jessica is connected to the order of the Bene Gesserit, who are playing a long-game of controlled breeding to create super-being who will become the messiah for all of space. When Jessica has a son instead of a daughter, she's actively changing the foreordained history planned by the Bene Gesserit. Put it this way: In Star Wars; if Anakin's mom was able to choose to have a certain kind of "Chosen One" baby, she would be as powerful as Lady Jessica.

Though she's not a huge deal throughout the first book and had a fairly small role in the Lynch film, Villeneuve has said the role of Lady Jessica (now played by Rebecca Ferguson) will be expanded. From the Vanity Fair piece:

"In the script, which Villeneuve wrote with Eric Roth and Jon Spaihts, she is even more fearsome than before. The studio’s plot synopsis describes her as a “warrior priestess.” As Villeneuve jokes, “It’s better than ‘space nun.’ ”

Basically, get ready for a slightly more significant and pivotal version of Lady Jessica, perhaps in line with Cate Blanchett's turn as Galadriel in Lord of the Rings.

2. Liet Kynes is now a woman

In a gender-swap that will remind some fans of Starbuck becoming a woman in the reimagined Battlestar Galactica, Liet Kynes will now be played by Sharon Duncan-Brewster. In the Lynch movie, this role was famously played by Max von Sydow. Liet Kynes works with Duke Leto, but actually has a double-life as the leader of the Fremen, essentially Dune's desert revolutionaries who are all about taming those sandworms.

"What Denis had stated to me was there was a lack of female characters in his cast, and he had always been very feminist, pro-women, and wanted to write the role for a woman,” Duncan-Brewster says. “This human being manages to basically keep the peace amongst many people. Women are very good at that, so why can’t Kynes be a woman? Why shouldn’t Kynes be a woman?”

As Peter Jackson expanded the roles for women characters in Lord of the Rings, making this important character NOT a white guy is very exciting.

1. The villain will be truly scary, not silly

One of the most problematic aspects of the Lynch version of Dune was the portrayal of the Baron Harkonnen as a corpulent, disgusting, gluttonous, and fairly cliché "evil person." He comes across as a weird stereotype, which kills some of the drama. In other words, bad guys don't need to be gross to be bad. This fact is something that Villeneuve has taken to heart with the new adaptation.

“As much as I deeply love the book, I felt that the baron was flirting very often with caricature,” says Villeneuve. “And I tried to bring him a bit more dimension. That’s why I brought in Stellan [Skarsgård]. Stellan has something in the eyes. You feel that there’s someone thinking, thinking, thinking—that has tension and is calculating inside, deep in the eyes. I can testify, it can be quite frightening.”

Apparently, the new look for the Baron Harkonnen will be less about the character being a human Jabba the Hutt, and more of a "rhino in human form." This isn't literal, of course, but it does mean the danger in the new Dune will, for the first time ever, be rendered more complex, and hopefully, legitimately frightening.

Dune is set to hit theaters in December of 2020.