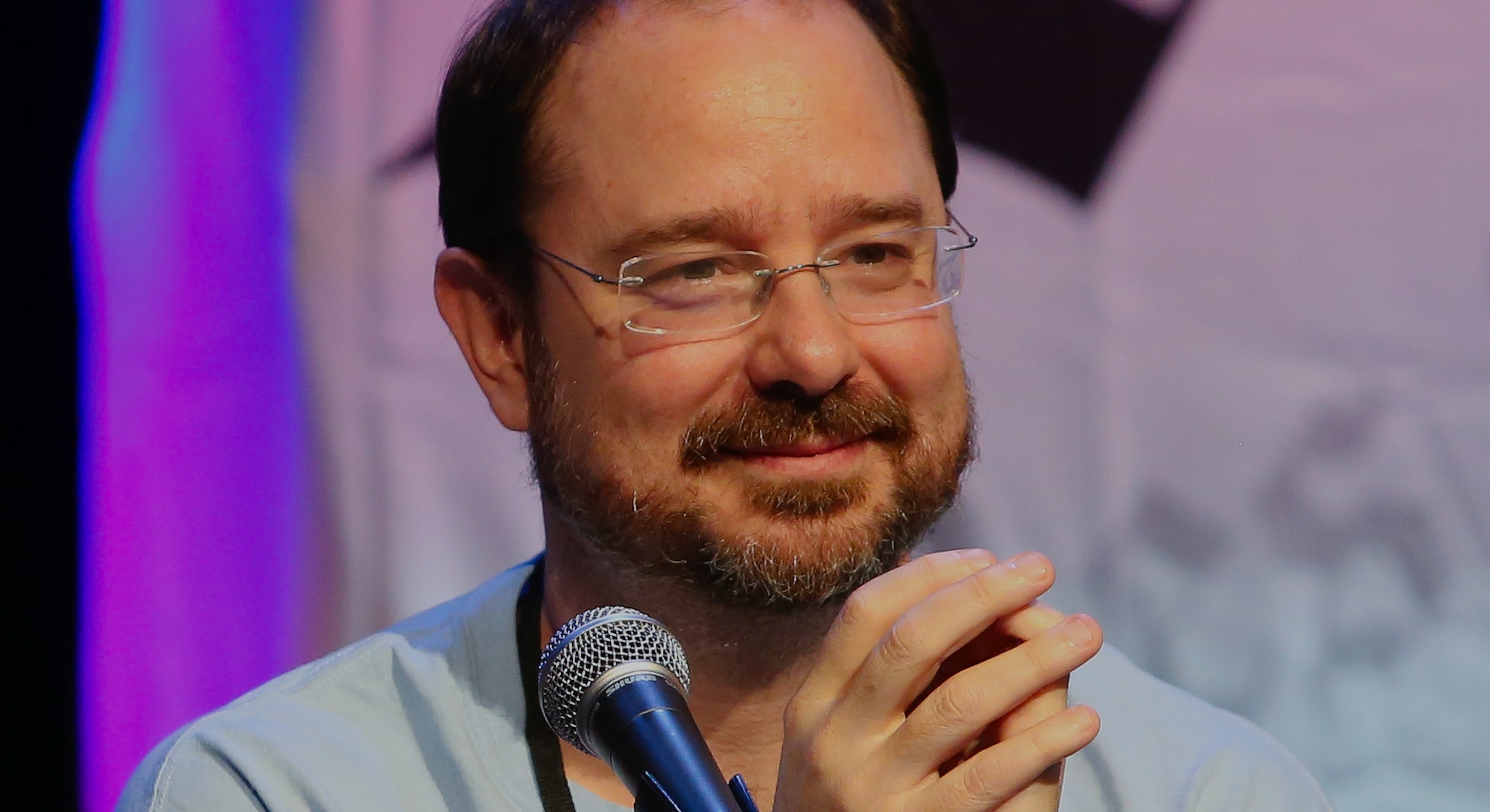 In Asking the Prophet, we use our alien probes to pick the brains of sci-fi and speculative fiction writers. This week, we spoke to sci-fi heavyweight John Scalzi about spaceships, meat-and-potatoes sci fi, social media, and nerd gatekeeping.

How do you get your ideas and meld them into a plot that feels plausible?

Getting ideas is not the problem, it’s telling which ideas are worth writing about and which ones are not. That’s the real key. Any time I have an idea, I don’t immediately write it down. I just let it roll around in my brain with all the others. They sort of have an idea thunderdome up there.

The ones that survive over a few months are the ones I start thinking about more seriously. I come up with tons of ideas, but most are — generally speaking — crap. For example, if I come up with an idea before bed, I don’t write it down before I go to bed. If I wake up and I can’t remember that really cool idea I had, then clearly it wasn’t that cool. On the other hand, if I have something that lasts in my brain for weeks and I’m thinking about it when I’m not doing anything else, then it’s something worth following up. With regard to plausibility, I don’t worry about that too much. If it’s a good enough idea, then I’ll start thinking about it more intensively to see if it’s something that can be made probable in the story.

Do you read a lot of science publications or articles? How do you keep up with information to spark those ideas?

Most of my job is sitting in front of my computer reading shit, so information comes from lots of different places. It comes from science, from pop culture or what people are talking about. I have a serious idea I’ve turned into one of the books in my book deal that came from a music video. The video itself is not particularly science fictional, it’s just one element stuck in my brain and rolled around until I eventually began to build a story around that.

What video was it?

It was from two or three years ago. The specific band escapes my brain right now. The video itself wasn’t particularly memorable, it was that particular element of it.

Is there anything related to any new scientific discoveries or technological advancements that has fascinated you recently?

Some of the stuff I’m finding interesting is propulsion and spacecraft. There’s a particular engine that is kind of an inertialess drive. It doesn’t have a whole lot of fuel, and it vibrates and pushes the drive forward. It was really interesting because the whole idea is not supposed to work and somehow it does — what does it mean? It’s under peer review and it may or may not actually pan out, but in the meantime, it’s something to be thinking about: If you were going to do that in science fiction, how would you do it and what does it mean?

You’re a very active member of the sci-fi community, but you’re also outspoken about its flaws, most notably on your blog and Twitter:

And you’ve also talked a lot about the idea of gatekeeping, which is basically what the Sad Puppies Hugo Awards fiasco was about. What’s your takeaway from that? Where do you see the genre going in the future?

The major flaw of the Sad Puppies was not that they loved their particular brand of science fiction, but that they believed that it was somehow being crowded out of the marketplace by other, more politically correct stuff. That’s complete nonsense.

At the end of the day it’s, “Here is a writer,” this writer comes from a specific background, has specific things to say, puts out their stuff, it finds an audience, and you move forward from there. Does it have to conform to what has come before? No! Why should it? It’s a speculative genre!

People like Kameron Hurley are not being subsidized. This is America; we don’t believe in subsidizing our arts. They’re in the stream of commerce. People are buying it and sharing it and telling people they love it. What we’re seeing is both the expanse in the readership of science fiction and fantasy and the acceptance of the idea that it just doesn’t have to be one type of thing. If you are there demanding that science fiction has to be exactly this way, you are the proverbial king holding back the tide. It’s just not going to work.

Science fiction and fantasy is becoming more diverse in who writes it and what is represented — and I, for the life of me, cannot see what the problem is. I mean, come on. I write meat-and-potatoes classic science fiction. I’ve got spaceships, I’ve got lasers, I’ve got aliens. To suggest that there’s not a market for that type of science fiction is absolutely ridiculous. I’m doing great!

It just also happens that there’s lots of other cool stuff out there that is not like the sort of stuff that I write, and I think that’s great. Not everybody is going to be interested in the stuff I write — and not everybody should be. There should be science fiction and fantasy of all genres. It should be as inclusive as possible about the possibilities of the future and the possibility of alternate worlds and alternate setups. Otherwise, it’s fundamentally missing the point of what science fiction and fantasy can achieve.

Do you think the modern sci-fi writer has to be as outspoken and plugged in as you are to succeed, or is it a personal choice?

People often say, “The only reason that John Scalzi is on social media is to help his career.” What I like to remind people is that I had a blog seven years before I actually had my first science fiction novel published. I was a newspaper columnist 12 years before I had my first novel published. The reason I’m on social media is because it’s a format that’s congenial for me in terms of my own personality. I don’t think everybody who writes needs to be on social media. Quite frankly, a lot of people don’t seem to enjoy it and aren’t really good at it. If you’re one of those people, then you’re not going to be doing yourself any favors being on social media.

The fact of the matter is, there are many ways for writers to promote their work and their career. Not everybody has to do it the same sort of way. China Miéville is one of the most talked-about writers of speculative fiction around, and he’s very rarely on social media; I don’t think he even has a Twitter or Facebook account. Ultimately it comes down to, who are you as a person? Are you going to have fun on social media? Are you going to freak out and think if you’re not promoting something all the time, you’re doing something wrong? If it fills you with apprehension about what you have to perform — then the answer is maybe you shouldn’t be on it.

Which authors do you read in your spare time? Who are your influences?

China [Miéville] doesn’t influence me — because there’s no possible way I could write like him; I read his stuff and enjoy it specifically because I don’t have to sit there and think about what can I steal from him — but he’s definitely someone whose talent I deeply admire. Neal Stephenson is someone who was an influence on me. His first chapter of Snow Crash is one of the best first chapters in science fiction and fantasy, hands-down. That certainly reminded me, when I started doing my own writing, to front-load your stuff. Don’t make people wait three chapters to get to the good stuff. Give them the good stuff right up front, because if you give it to them early, they’re going to sit with you through other parts of the story where you might have to slow down and pace yourself.

But these days, I don’t read a whole lot of people for the influence. Partly because I’ve got my own things I need to be doing. I frequently read people who have absolutely nothing to do with what I’m writing myself. N.K. Jemisin’s new book The Fifth Season is absolutely terrific and I would be very surprised if it’s not shortlisted for every possible award in the next year. I don’t read her to be influenced by her; I read her because she’s a good read and I admire how she writes. Am I consciously taking stuff from her? No. But on the other hand, just like any other craft person, when you are looking at something that someone of equal or more talent does, you’re definitely saying, “Oh, that’s how she does it. That’s cool, I’ll have to remember that.”