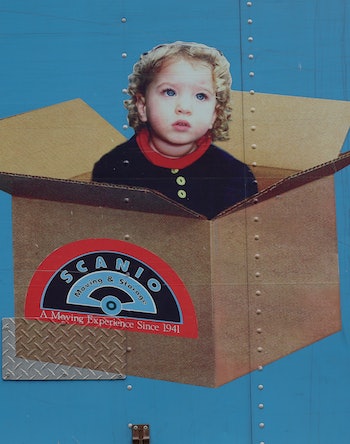 Throw a stone at the internet and you’ll have a broken computer. Throw a stone online and you’ll hit a wikiHow, subreddit, or Thought Catalog diatribe pondering the consequences of a stationary life. Our culture is not so obsessed with the “move from a small town, get a start in the big city” narrative — thanks a bunch, Horatio Alger — that the idea of staying put is weirdly conflated with the idea of failure. The Gilded Age is well behind us, but we’re still Manifest Destiny-ing our way from city to 35 Best Cities For Young Adults listicle. But what if we didn’t? What if we just put down roots?

“Unambitious Loser With Happy, Fulfilling Life Still Lives In Hometown,” declared The Onion in 2013. Scientifically, that sounds about right. Our brains are much more influenced by the specific locations we live in than by the abstract idea of being stuck. Still, you can learn a lot about a person by where they are from and where they have chosen to be. In a sense, migration patterns are indicative of self diagnosis. Witness the data showing that a childhood in a blue state or a densely populated area makes it significantly less likely for a person to marry young. New York kids stay single and keep swiping. They also feel weird about it: City kids have a slew of brain issues that their rural counterparts don’t. Research reveals that people in cities are 21 percent more at risk for anxiety disorders and 30 percent more likely to have a mood disorder. In a study by the University of Heidelberg, the amygdala and cingulate cortex (the bit that controls emotion and adversity response) of otherwise healthy city-dwellers became over-active in stressful situations.

The political polarization of the country presumably hasn’t done much to help. Opportunity is less of a motivator when culture varies widely and the digital economy is in full swing. Presumably that’s why more people are just staying home.

“The notion that one can pick up and move to a location that promises better opportunities has long been an important part of the American mystique,” writes authors from the University of Notre Dame and the Federal Reserve Board in the Journal of Economic Perspectives. “However, migration rates have been falling in the past several decades, calling into question the extent to which high rates of geographic mobility are still a distinguishing characteristic of the U.S. economy.”

Non-academic translation: More and more Americans are putting down stakes. Internal migration has declined across demographic and socioeconomic groups since the 1980s and has steadily continued to drop. Only 11.6 percent of people changed residencies between 2010 and 2011, the lowest rate of movement since the government started tracking these trends in the 1940s. Younger people tend to move more, but they don’t migrate the way they once did. They go west after graduating Harvard Business School, but not after getting their high school diplomas.

Whether you choose to move is also largely determined by what state you grew up in. The current economic downturn, the rise of the two-career couple, and our aging population of baby boomers have all effected the decrease in internal migration. But whether one breaks from the four-in-ten Americans who have never moved from their hometown is hugely considered by the chance of your birthplace. In the Midwest more than 70 percent of residents stayed in the state where they were born and nearly half of all adults in this region spent their entire lives in their hometown. Meanwhile, less than a third of those who have grown up in Western states have done the same, with Californians among the most likely to move around more frequently

Julia, 25, fits into what the Pew Research Center defines as the “mover” category. She’s college educated, from California, and has lived in three different cities in the past seven years. Her motivation for moving around after college has primarily been work, although she knew going back to the West Coast would be good culture fit.

“Say I was offered a job in Seattle or Los Angeles, I would have gone there,” she says, describing a move to Berkeley. “Its a cultural thing in my family as well. I was raised with the mantra, ‘Grow up, do well, work hard, and get out of here.’’

One’s personality can predict whether or not they’ll move in ways that may seem surprising. It makes sense that highly active people have a higher tendency to migrate and social people choose to go to urban locations. But the very emotional are more likely to move away from home as well. They may not move too far from where they are from, but “the fact that they do not move often or selectively to urban locations indicates that people with this personality trait move simply because they are not content where they are,” states the Association for Psychological Science.

See Also: How Theoretical Physics Caught Up With Ancient Philosophy

If you liked your hometown as a kid, there is no way to predict your happiness if you never move away. Seeing new things is amazing, but being able to see your mom anytime you want is amazing as well. Contentment largely rests on aligning one’s traits with one’s situation. If you’re a 22-year-old from Indiana who wants to get married soon and grew up on a farm, well, Chicago probably isn’t a good bet. That said, you’ll never know what could have been if it never was.

If that makes you nervous, you might want to consider moving out of the city.

See also: “Your Brain on Meditation”