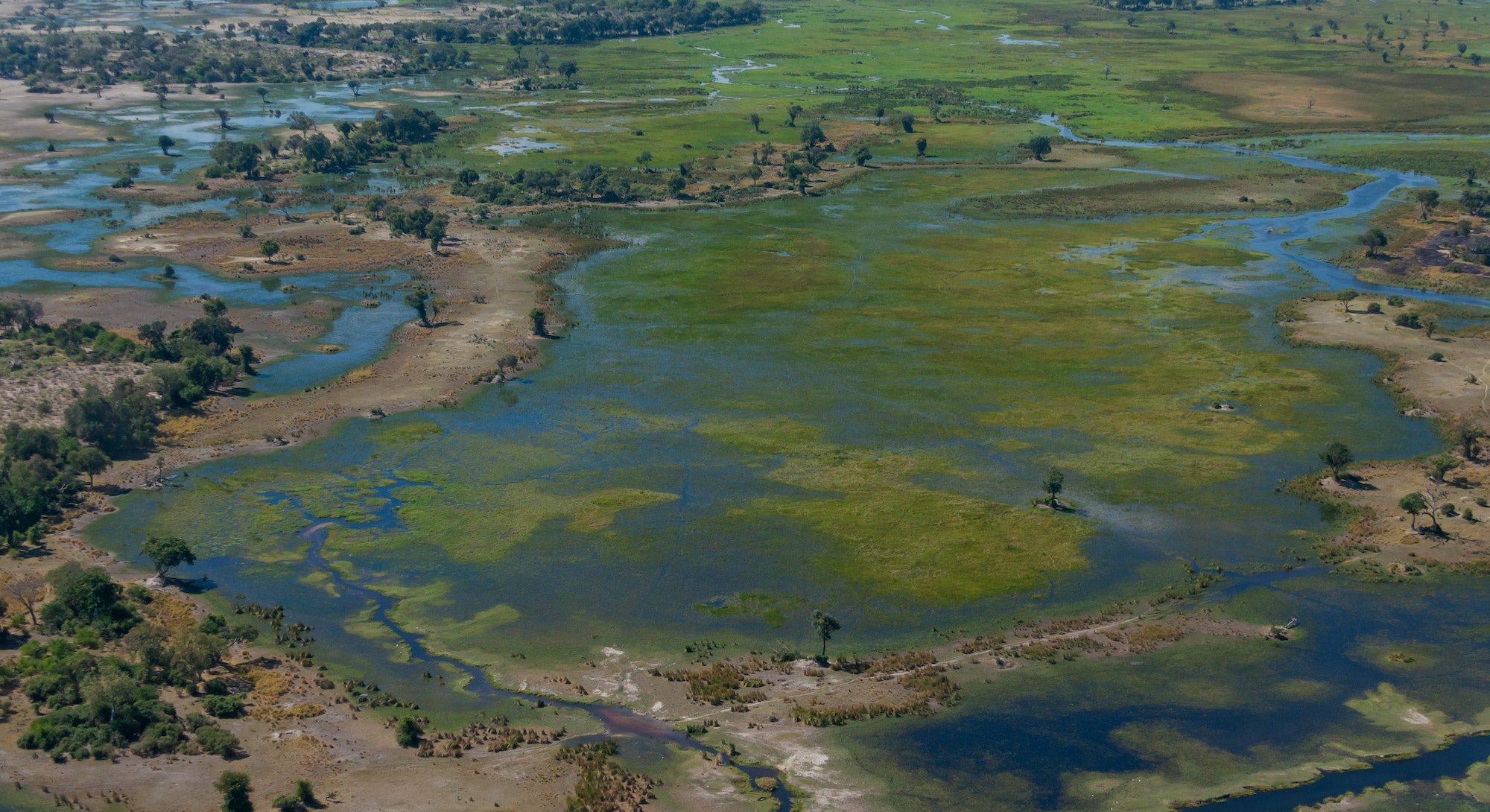 Your hometown feels special, no matter how many miles, years, or experiences are put between you and your birthplace. Hundreds of thousands of years separate modern humans from our own ancestral hometown, so much so that we’ve never been sure exactly where it was. Now, a team of scientists believe they’ve have pinpointed the place humanity can call home.

Roughly 200,000 years ago, (one proposed date for the emergence of modern humans, there are competing theories) we were hanging out somewhere in a Northeast Botswana, south of the Zambezi river, according to genetic analysis, climate data, and archaeological evidence presented in a Nature paper published on Monday.

As Vanessa Hayes, Ph.D, a geneticist at the Garvan Institute for Medical Research explained to reporters on Thursday, this ancestral homeland looked a lot different back in the day than it does now. But back then it was such an appealing place that we stayed there for tens of thousands of years. In this paper, the team dives deep into what it was like there, why we liked it so much, and what, after all that time, finally pushed us out of the nest.

“We pinpoint a homeland region, we discover that [anatomically] modern humans appear to thrive there for 70,000 years and then we describe the first human explorations,” she told reporters on Thursday.

"We pinpoint a homeland region, we discover that modern humans appear to thrive there for 70,000 years."

The bulk of this analysis rests on the analysis of mitochondrial DNA, which is DNA that’s housed not in the cell’s nucleus (where most of our DNA is) but in the cell’s energy-producing machinery. Unlike nuclear DNA which is remixed, and recombined every time a new person is born, mitochondrial DNA doesn’t appear to recombine — though new models suggest some recombination does happen.

However, scientists can trace mitochondrial DNA sequences throughout time to reveal exactly how early humans diversified into different lineages.

In this paper, they followed a specific genetic signature that’s representative of the L0 mitochondrial DNA branch, the “deepest rooting” signature that, arguably, goes back to the first anatomically modern humans.

This paper found that signature in 198 new individuals that they tracked down as part of their study making it “by far the largest L0 study to date” as Hayes added. But it also paints a picture of what life was like when early humans were still living in the ancestral homeland.

Just before the rise of anatomically modern humans, this area was a giant lake called Lake Makgadikgadi. That lake, in its prime, was larger than Lake Victoria, Africa’s largest lake which is 26,828 square miles. Now all that remains of Lake Makgadikgadi which dried up about 10,000 years ago, are the Makgadikgadi salt pans.

Around 200,000 years ago the lake had already begun to break up into smaller pools. Overall, Hayes explains that this formed a wetland that would have been ideal for early humans — today, she says it would have looked a lot like the UNESCO heritage site, the Okavango delta, also in Botswana. It may have been swampy, but it was home.

This wetland served its purpose so well, that Hayes added that humans “thrived” there for about 70,000 years, until several changes pushed us to move away from home.

Why did we leave?

Even today, humans find it hard to leave the places we call home, and so it was back then for hundreds of thousands of years. But around 130,000 years ago, two specific climate shifts opened what this team refers to as “green corridors.” These corridors acted as pathways that our ancestors followed out of the homeland.

"There is clearly a shift in climate and vegetation."

As Axel Timmerman, Ph.D., a study co-author also explained on Thursday, this was driven by a major climactic shift. 130,000 years ago coincides with the end of the penultimate glacial period, a time when Timmerman says there was a “major change in earth’s orbit.”

“In particular, the Southern Hemisphere summer is moving closer to the sun,” he explained. “It receives more sunlight and it’s also having more moisture. There is clearly a shift in climate and vegetation that allowed greater rainfall around 130,000 years ago.”

More rainfall created that first “green corridor,” and humans followed it northeast, away from the wetland lake. Though, as Hayes added, this migration was just the maiden voyage, a significant amount of people stayed put.

The real migration actually happened sightly later: around 110,000 years ago, going by this analysis. This time, humans went to the Southwest, following yet another “green corridor.” Eventually, these two corridors formed a single massive highway: one section leading northeast, the other leading southwest with the ancestral homeland in the middle.

Timmerman argues that these green corridors and others like them that may have appeared and disappeared throughout ancient human history, played a large role in prompting the migration of early humans. He has argued this as early as 2016 in letter also published in Nature where he makes the case that green corridors paved the way for migration out of Africa too.

“The green corridor concept has been put forward in many different situations to explain the long-term migration of hominins, also neanderthals into Arabia,” he noted on Thursday. But points out that it’s the combination of mitochondrial DNA analysis that makes this paper so unique.

The fact that the mitochondrial DNA seem to split off in concert with the opening of these “green corridors” suggests it’sn more than just chance. “That is the unique part here, where we can demonstrate this coincidence with better accuracy than ever before,” he added.1158

“We want to know where we come from”

The idea of having a single ancient homeland is comforting and simple. And although this team presents a compelling argument for this single lake, it’s not the only theory out there. Other work suggests that humans may have more than one ancestral homeland.

For example, in 2017 two papers describing a series of fossils found in Morrocco pushed back the emergence of modern humans to 300,000 years ago, and suggested that humans were emerging all around the African continent at that time.

“We have to change our textbooks,” Jean-Jacques Hublin, Ph.D., a paleoanthropologist with the Max Planck Institute and lead author one of papers, told Inverse in June 2017. “Our species did not emerge suddenly 200,000 years ago in a restricted ‘Garden of Eden’ somewhere in East Africa. If there was ever a Garden of Eden for H. sapiens, it had the size of the African continent.”

By contrast, this new paper presents an argument in favor of that “cradle of humanity idea” and it goes so far as to put an exact location on where that cradle is. “It’s something that fascinates all humans,” Hayes added. “People want to know where we come from.”

It may turn out to be just one of many hometowns for humanity. But going by their analysis it’s likely one place that was particularly important for the earliest members of our species.

Anatomically modern humans originated in Africa around 200 thousand years ago (ka)1–4. Although some of the oldest skeletal remains suggest an eastern African origin2, southern Africa is home to contemporary populations that represent the earliest branch of human genetic phylogeny5,6. Here we generate, to our knowledge, the largest resource for the poorly represented and deepest-rooting maternal L0 mitochondrial DNA branch (198 new mitogenomes for a total of 1,217 mitogenomes) from contemporary southern Africans and show the geographical isolation of L0d1’2, L0k and L0g KhoeSan descendants south of the Zambezi river in Africa. By establishing mitogenomic timelines, frequencies and dispersals, we show that the L0 lineage emerged within the residual Makgadikgadi–Okavango palaeo-wetland of southern Africa7, approximately 200 ka (95% confidence interval, 240–165 ka). Genetic divergence points to a sustained 70,000-year-long existence of the L0 lineage before an out-of-homeland northeast–southwest dispersal between 130 and 110 ka. Palaeo- climate proxy and model data suggest that increased humidity opened green corridors, first to the northeast then to the southwest. Subsequent drying of the homeland corresponds to a sustained effective population size (L0k), whereas wet–dry cycles and probable adaptation to marine foraging allowed the southwestern migrants to achieve population growth (L0d1’2), as supported by extensive south-coastal archaeological evidence8–10. Taken together, we propose a southern African origin of anatomically modern humans with sustained homeland occupation before the first migrations of people that appear to have been driven by regional climate changes.