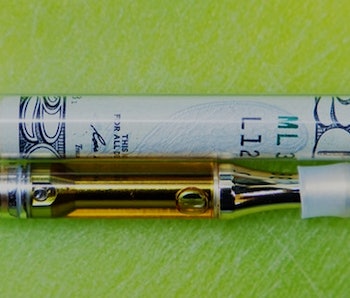 While I wonder about the taste of a zebra burger, let’s get you caught up on the news of the day. We’ve got stories about the future of legalized pot, the texture of fake meat, the flu pill, Google’s big announcement about the future of computers, and precisely one story about going down the pub.

I’m Nick Lucchesi, executive editor at Inverse, and this is Inverse Daily for Thursday, October 24, 2019. If you’ve got a suggestion for how to make this newsletter better, drop me a line at nick@inverse.com. And follow me on Twitter, where I retweet the best of Inverse every day.

(Shout-out to the readers who wrote in to say our story about going vegan in yesterday’s email was illustrated with a photo of hard-boiled eggs. Our bad.)

“He doesn’t need to blend with anyone else — he’s his own distinct person.”

In the US, we have hot takes when it comes to THC vaping. But in Canada, there may actually be an answer.

The high-stakes rollout of legal THC vape cartridges north of the border in December will give America the first real look at a regulated THC vaping market, and experts say we should watch Canada closely.

In this impressive new feature story, Emma Betuel spoke with government officials, academics, and THC vape users on the black market to figure out what’s really going on with a popular and dangerous way to use marijuana.

Read our latest feature on vaping →

Lab-grown meat may soon feel a lot more like traditional meat, thanks to a breakthrough in how the cells are grown.

Researchers at Harvard University have developed an edible gelatin scaffold that gives muscle cells a structure to develop into more natural shapes. The team found that they could encourage cow and rabbit cells along the structure to grow in predesigned ways.

It comes as the lab-grown meat space starts to develop, ahead of an expected launch sometime in 2021. When Inverse spoke to the experts who tried the first lab-grown hamburger in 2013, one compared it to the feel of a McDonald’s burger. Multiple startups in the space are now exploring new methods for improving the feel.

These advancements could encourage consumers to give up traditional meat in favor of cultivated creations. There’s still some way to go, however. The Harvard researchers noted that regular meat packed more fibers than their creation, indicating the original muscle’s maturity.

More from the lab:

Give me my flu pill

The flu shot works, but only about half the time. That’s why scientists eagerly search for the holy grail of virus inoculation: a universal flu vaccine or treatment that stops a fever, cough, and fatigue.

In the future, on top of your flu shot, you may be able to take a pill that clears up symptoms if you come down with the flu. The “flu pill” could save thousands of lives when the flu shot fails.

“The best disease is really the disease that you do not get,” Dr. Richard Plempler, senior author of a new study on the matter, tells Inverse ‘s Ali Pattillo.

Plemper’s research was conducted on ferrets and human tissue models, so we’re still far from a widely distributed drug for patients. If future research, in humans, not animals, continues to show that the antiviral drug takes down influenza quickly and effectively, it’s not a stretch to say we may see more people bouncing back from the miserable illness in the future.

Read the full story just in time for flu season →

If you’re craving more extremely nerdy news, Input brings you everything from drone reviews to next-gen console rumors and, frankly, we think you’ll love it.

The story on “quantum supremacy”

Google claims it has achieved something extraordinary, and it’s published a paper explaining how it did it.

In a paper published Wednesday in the journal Nature, researchers claim they created a quantum computing system that took 200 seconds to complete a specified task. The task would have taken a classical computer 10,000 years to complete, far longer than the life span of the machine, meaning Google’s setup had demonstrated “quantum supremacy.”

The success of the experiment, announced ahead of the paper’s publication last month, could help pave the way for practical applications of the technology.

“I think people in Google and Silicon Valley tech companies will see that this technology may be a lot closer than they thought, and have to think about it more carefully,” John Martinis, one of the paper’s authors, told reporters on Wednesday.

We’re going down the pub

By the end of the evening, the taste of alcohol fades, but traces of the memories formed with a drink in hand linger on for years. The exact content of those memories might be hazy the next day, but the smells, sounds, and sites of a familiar bar can be enough to trigger a strong alcohol craving that emanates from deep in the brain. Now scientists have an idea of why these memories feel so strong.

Being at a party, a bar, or out with friends on nights or lweekends are all common situations that might trigger a need for alcohol that can be particularly difficult for people struggling with alcohol abuse.

Read this before happy hour →

This story is behind a metered paywall, so I am not sure if everyone will be able to view it, but the New York Times last night published a story about a man named Amado, who lives in a basement in Queens, New York, when he’s not working at a restaurant. He is something of a hero, nay, legend, in his hometown of Coatzingo, Mexico. The story will stay with you all day, I promise. Read it here.

That’s it for Inverse Daily today. If this theory about C-3PO actually happens in the movie, I’m going to get a tattoo of his golden head.